Tensions are on the rise with a resurgent Russia.

Over the past decade they have mounted conventional operations in Georgia, Ukraine, and Syria. Concerns about their military are the highest since the Cold War.

Can history shed any light on the situation?

The latest addition to the AUSA book program is The Battle of the Dnepr. 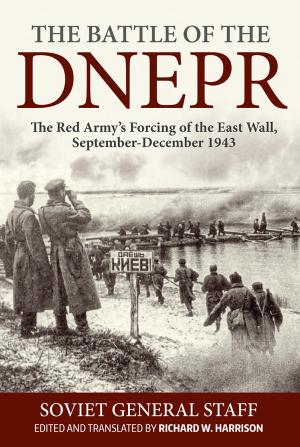 It is part of the Soviet General Staff series, a collection of internal studies of Red Army operations against Nazi Germany in WWII. The books provide an insider’s view of their logistics, intelligence, communications, and command and control.

The series was edited and translated by Richard H. Harrison, a Russian studies expert who lived in post-communist Russia, worked for the U.S. Department of Defense, and taught at the U.S. Military Academy at West Point.

AUSA sat down with Dr. Harrison to ask a few questions about the series.

AUSA: Please explain the significance of The Battle of the Dnepr in relation to the Eastern Front of WWII.

Harrison: The Battle of the Dnepr represents the failure of the German army to establish a viable defensive front in the East.

Following their defeat at Stalingrad and the large-scale withdrawal from eastern Ukraine and the Northern Caucasus, the Germans and their allies were able to restore the semblance of a front during the winter of 1943.

However, instead of conserving their strength, the Germans instead launched the ill-fated offensive against the Soviet salient around Kursk in July 1943.

The subsequent Soviet counteroffensive showed that the Germans had irrevocably lost the strategic initiative in the East and were no longer capable of mounting a major offensive.

However, there still remained the faint hope that they could reconstitute their front behind the Dnepr River, which they grandly christened the “East Wall.”

AUSA: What initially drew you to Soviet studies?

Harrison: I was a child of the Cold War, when the Soviet threat loomed large in our collective imagination.

I vividly recall getting up early in the morning to watch the early U.S. manned space launches and took it very hard when the Soviets seemed to pull ahead of us.

My father’s service as a launch control officer in the Minuteman missile program further brought the entire problem of nuclear war home to me in a very real way.

Somewhat later, when I enrolled in college, I quickly found myself hooked on Russian language courses and even transferred to another university in order to further my studies.

I later had the opportunity to study in the Soviet Union, which cemented my interest for good.

AUSA: Why did the Red Army General Staff commission these studies?

Harrison: These studies essentially constitute a “lessons learned” approach to the war’s history as a way of passing on the experience of the Great Patriotic War to a new generation of Soviet officers.

They were for many years classified, thus automatically elevating their status as learning tools. While certainly not entirely free of the standard Soviet boilerplate, they are nevertheless more objective in tone in dealing with the Red Army’s conduct of operations, including their mistakes.

This was the General Staff’s concession to reality, as one could not instruct a generation of officers to conduct major offensive operations on the basis of those materials available to the general public.

AUSA: What lessons could today’s U.S. Army take from these books?

Harrison: In the 1960s, nuclear weapons seemed to have rendered the experience of World War II obsolete, as the Soviets appeared to have placed all their eggs in the nuclear basket.

However, beginning in the late 1960s and continuing into the next decade we saw a resurgence in the Soviet army’s interest in conducting offensive operations without nuclear weapons.

These works were a how-to-do primer on how to prepare an operation, break through the enemy’s tactical defensive zone, and exploit the success.

Should the resurgent Russian army ever consider a conventional attack, the material would be highly useful.

The Battle of the Dnepr and the rest of the Soviet General Staff series is published by Helion & Company.

To order a copy, visit http://www.helion.co.uk/