The buzz surrounding machine learning and artificially intelligent systems has become deafening. The hype and speculation about these topics are driving the imaginations and ambitions of many entrepreneurs, investors and leaders. The time has come for the Army to consider the impact these developments have had on its operating environment and determine how best to adapt and apply these advancements.

Whoever gains digital awareness dominance will have the high ground in future warfare. Since the dawn of battle, commanders have used their understanding of their operating environment, their adversary and themselves to guide their decision-making. They have relied upon actionable intelligence to drive operations. Sun Tzu’s well-known quote, “If you know the enemy and know yourself, you need not fear the result of a hundred battles,” remains true today. What has changed, however, are the means to acquire and interpret this intelligence.

In the mid-1990s, the ability to collect and store massive amounts of digital information created new conditions for cultivating understanding. The drive to produce value out of these growing data stockpiles inspired new developments in predictive analytics that could tease out insights no human mind could ever decipher from this “big data.”

With the rise of the smartphone, the demand to capture, analyze and understand their use increased. The data from the dozen or so sensors found in the approximately 5 billion mobile devices tethered to their users globally has been a bonanza. Most recently, data from the rise of the “internet of things” expanding into cars, homes and offices has given data analysts more fertile fields from which to harvest new insights.

New methods of iteratively improving the algorithms used to make sense of big data have garnered advances in the field of artificial intelligence (AI) research—most notably in the concept of machine learning.

In machine learning, training data is fed into a model that continuously fits a curve to provide higher and higher levels of accuracy. This refitting allows a given system to adjust its predictions based on changes in the relative importance of given variables. This method allows a predictive system to produce more and more accurate algorithms—hence the machine is “learning” to improve its predictive performance. This ability for a system to recursively improve its performance is what is driving the hype behind AI systems.

Analysts and researchers still heavily debate when the tipping point for AI systems to independently develop the means to improve their performance through machine learning will occur. However, the rate at which AI systems, such as Google’s DeepMind, are demonstrating such performance is astounding. This system went from having to be taught the rules of various games then dominating them to self-learning these rules and recursively improving its performance to unparalleled levels. Many view the results of Google’s DeepMind experiments as both electrifying and alarming.

Recently, Harvard Business Review reported that nearly half the Fortune 1000 companies are achieving measurable results from investments in big data and predictive analytics—not just in improving their bottom line—but how they do business.

Victor Nilson, senior vice president for big data at AT&T, has argued for the benefits in applying big data and analytics to aid strategic decision-making. “We’ve used big data techniques to analyze all the different permutations to augment that experience to more quickly resolve or enhance a particular situation. We take the complexity out and turn it into something simple and actionable,” he told the McKinsey & Co. management consulting firm in April 2016. Ingesting complex data to produce straightforward guidance is not just what corporate leaders want—it’s what military commanders demand of their staff.

For many analysts and researchers, one of the central questions they have concerning the rise of AI systems relates to the future nature of work. What will humans do? What will they outsource to these systems? Alec Ross in The Industries of the Future, Martin Ford in The Rise of the Robots: Technology and a Jobless Future, as well as Richard and Daniel Susskind in The Future of the Professions: How Technology Will Transform the Work of Human Experts, argue that most knowledge workers will become obsolete.

DoD and the Army should consider what work within military formations may also be replaced by AI systems—or at least enhanced by them—to improve the effectiveness of warfighters. 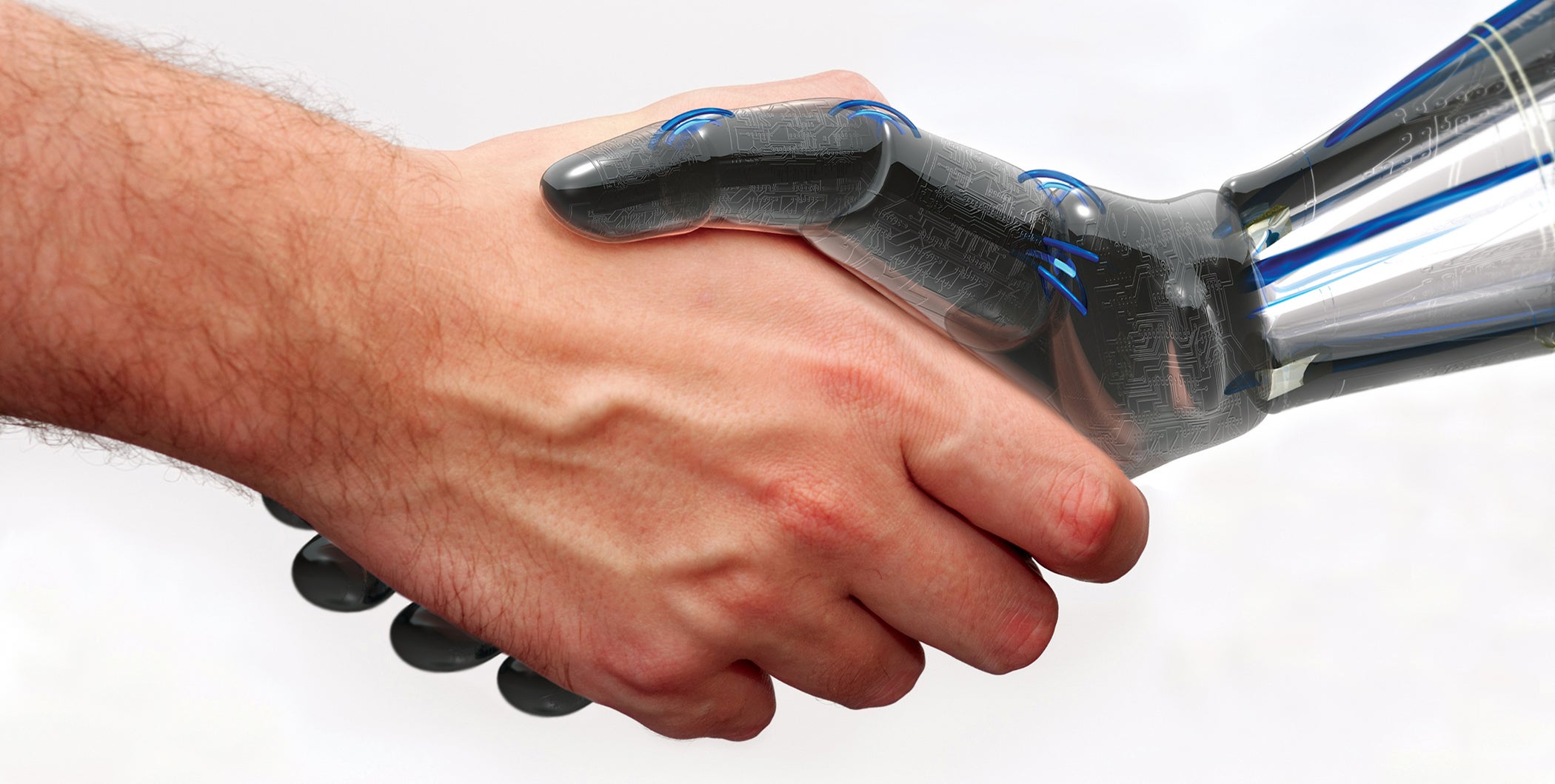 For corporations as well as the military, the combination of ubiquitous digital devices, omnipresent connectivity and big-data opportunities offers the means to gain a level of awareness previously unimagined. Data, flooding in continuously from public sources as well as the military and intelligence community’s assets, will require increasingly capable AI systems.

Much of the promise of AI systems employed at the operational and strategic levels of an organization’s decision-making stems from emerging evidence that they can provide such an advantage. The military that gains and maintains digital-awareness dominance will be rewarded with profound insights regarding an adversary’s actions and likely intentions. It may also find itself relying more heavily on AI advice on how best to win.

The concept of human-machine teaming centers on a synergistic relationship between the best of human and machine capabilities. At the tactical level, this means adding tech-to-task as part of the broader troop-to-task analysis. Where do combat leaders want to buy down risk and how can they leverage AI unmanned systems to enhance combat effectiveness?

Three primary areas appear as good starting points for the Army to investigate:

AI systems, fed big data and powered through predictive analytics, have demonstrated their value in the commercial world. For instance, doctors, paired with an AI assistant, have shown themselves better able to diagnose symptoms and direct treatments. AI systems have passed medical exams, outperformed radiologists in diagnosing pneumonia, and made their way into a booming medical device market. Building on these advances to enhance combat medics’ effectiveness is just one example of a ready-now capability the Army could pursue, but there are many more.

Many AI systems are proving they can handle basic decision-making. For example, self-driving cars have demonstrated they can navigate complex environments autonomously. Once the nascent AI systems such as Apple’s Siri and Amazon’s Alexa evolve into next-generation human-like consultants, new paradigms for cooperative problem solving and AI-enhanced decision-making will emerge. In combat, this means future commanders may have real-time AI staff members analyzing likely outcomes and offering advice. But for this to become a reality, the Army must make investments now to begin collecting the data these AI systems will require to improve their performance iteratively through machine learning.

Advancements in AI systems have led to the development of robots endowed to complete the dull, dirty and dangerous work most cannot do, or just do not want to do. Simple, remote-controlled robots have long been used by explosive ordnance and disposal units to investigate dangerous devices. The Army aviation community has recently sought to incorporate more unmanned systems into their formations. Likewise, unmanned vehicles are making their way to infantry brigade combat teams. Efforts are also underway to support dismounted personnel. For example, the U.S. Army Research Laboratory is researching ways robots can manipulate objects and maneuver through changing environments with human-like dexterity.

The pairing of AI controlled unmanned systems as advanced scouts or protective centurions sounds appealing. However, the ethical and legal challenges surrounding the use of these systems remains contentious.

Autonomous systems, when programmed with a set of strict criteria, can find, fix and attack targets without human intervention. The ongoing challenge for policymakers concerns the rules of engagement for the employment of such systems. When can they take a human life without a human decision-maker’s approval?

Advances in sensing, communication and control will enable ever-increasing sophistication in the employment of autonomous systems. Therefore, the Army will have to establish clear guidelines for their use and ensure its policies keep pace with advances in these technologies.

With the rise of robots and human-machine teaming come other concerns beyond these ethical questions. The overdependence on advanced communications systems has been identified as a critical vulnerability and will become an ever-greater risk should future systems continue to depend on them for basic functionality. Cybersecurity and concerns of these systems either being degraded or manipulated by an adversary will keep many wary of adopting AI systems.

Also, as ubiquitous digital awareness permeates training environments and battlefields, more personal data will be captured and stored digitally, leading to increased concerns about privacy. Finally, the Army cannot ignore ongoing public debate about whether future AI systems will rebel against their human developers. Malevolent machines do not exist, but some leading thinkers are concerned they will appear.

Governments and militaries alike are at a point where they cannot ignore the abundance of research and anecdotes pointing to broad operating environment changes due to the expansion of big data, predictive analytics and the rise of AI systems. Army leaders must understand these changes and develop new approaches at the strategic, operational and tactical levels to ensure the service maintains the decisive advantages it has today.

While AI may be overhyped, there is something there.