Since their invention in the first half of the 19th century, binoculars have played a critical role in many tactical military operations. It has only been in the last decade, however, that U.S. Army binoculars have been optimized to meet the unique needs of individual
warfighters.

“Before 2000, the Army considered binoculars to be a ‘one size fits all’ type of item,” explained Barbara Muldowney, deputy product manager for Individual Weapons within the program executive office—Soldier. “And that’s pretty hard to do. But after 2000, the Army decided that they needed mission-specific binoculars.” 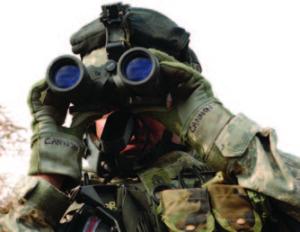 The Army's M22 Binocular is the primary field binocular for both the Army and the Marine Corps.
DoD, SSgt Kevin L. Moses Sr.

Briefing on binocular programs at the October 2006 AUSA Annual Meeting, Muldowney noted that the decision to provide mission-specific binoculars has led to the current Army family of three different binoculars: M22, M24 and M25. Moreover, continual development efforts have recently expanded the potential application of one of these systems through a new image intensification (I2) attachment device that can now be requested by warfighters.

The M22 binocular is the primary field binocular for both the Army and the Marine Corps. The 7 x 50 (7X magnification; 50 mm objective lens) measures 7.1 inches x 8.2 inches x 7.4 inches and weighs 2.7 pounds. It is available through Northrop Grumman Corporation, the prime contractor.

The M22, however, was too large to meet the needs of all warfighters. As a result, the Army procured a smaller version of the binocular system, which has been designated as the M24 mini binocular.

Although smaller (5.31 inches x 4.92 inches x 2.68 inches) and lighter (1.26 pounds) than the M22, the M24 provides the same 7X magnification with a 28 mm objective lens diameter. Northrop Grumman Corporation is also the prime contractor of the M24 system.

At the other end of the size spectrum is the M25 stabilized binocular. Manufactured by Fraser-Volpe Corporation, the M25 features 14X optics that allow warfighters to perform tactical reconnaissance at extended ranges with enhanced on-the-move sighting capabilities.

To  achieve stabilization, the M25 features a precision miniature gyroscope mounted on a gimbaled platform in the middle of the optical pathway. The platform holds prisms that provide a steady visual image regardless of movement of the objective or eyepiece lenses.

Company literature quantifies the capability by noting that the M25 “removes up to 98 percent of image motion caused by hand tremor and platform vibration, providing exceptional viewing from all types of moving vessels, aircraft and vehicles.” 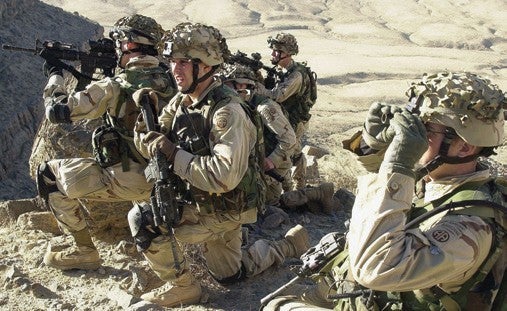 Some PEO—Soldier representatives characterize the M25 extremely high resolution capabilities as being able to see a golf ball a mile away. Others quantify the capabilities, crediting the system with a maximum range of 4,000 meters with an effective range of 2,500 meters.

“You really can’t appreciate it while you’re sitting down,” Muldowney said. “You have to be in a vehicle. In a vehicle, when you try to see something that’s moving [with conventional binoculars], you’re all over the place, but there’s a stabilized gyro inside these that stabilizes the image, so you could be moving but the image stays still.”

Not surprisingly, the capabilities of the stabilized M25 come with both size and weight implications. Measuring 8.25 inches x 9 inches x 7.5 inches, the system weighs 4.5 pounds. Two AA batteries provide the system with at least eight hours of use.

The M25 entered the inventory in 2006. According to Muldowney, “One of the problems was that [the user community] wanted the stabilized M25 to be near the same weight as the M24. So there was a big trade-off that the user community wasn’t willing to make. The [stabilized] technology was ready but it wasn’t ready for dismounted soldiers—it just weighed too much. But with a stabilized gyro in it you’re just going to have the weight. When the people in Humvees and other vehicles found out what the M25 can do, they wanted it. So fielding to those soldiers went first.”

The M25 stabilized binocular provides twice the magnification of the other two binoculars and holds a steady visual image regardless of movement.
Scott Gourley

PEO—Soldier representatives also used the 2006 AUSA Annual Meeting to unveil the latest binocular development designed to enhance the capabilities of today’s warfighters: an optional I2 night vision attachment for the M25.

“When the M25s were originally designed and fielded, they did not have an I2 device/attachment,” Muldowney said. “Now they do. We have come out with an I2 device that you can attach onto the binoculars.”

Although the original night vision binocular requirement reportedly dates back to a 1993 operational requirements document, Muldowney attributed the fielding delay to the same sorts of size and weight tradeoffs facing warfighters over the M25 stabilized system.

“Before this, warfighters had some I2 devices but nothing to go with their stabilized binoculars,” she said. “But this is a brand new capability. There is no modification required to the basic binoculars. You just put the I2 attachment on the front.”

Although plans call for the eventual retrofit of large numbers of M25s with the I2 add-on, Muldowney emphasized that warfighters who want the capability early should request it.

“The plan is to eventually retrofit large numbers of M25s, but with the budgets the way they are we can’t do it in a timely fashion. If warfighters want the I2 upgrade attachments they can request them and receive them through the Rapid Fielding Initiative.”