A retired colonel who for almost two decades has helped shape the Army’s doctrine about professional ethics and morality is being lauded for his work as he takes a slight step back from the front lines.

Don M. Snider taught political science at the U.S. Military Academy and has been a professor at the U.S. Army War College's Strategic Studies Institute for several years.  Simultaneously, for the past 6 years, Dr. Snider has also been the senior fellow for the Center for the Army Profession and Ethic, known as CAPE.

After more than five decades of combined military and civilian service, Snider still isn’t ready to stop. He’ll continue as an adjunct professor while doing research and writing at the War College. 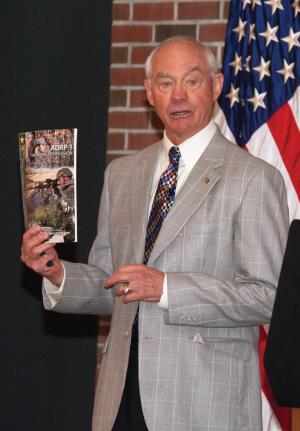 Snider, a 1962 West Point graduate with three combat tours, specialized in defense policy and national security strategy in posts that included being part of the National Security Council staff in the Reagan and first Bush administrations, and led to a final active-duty assignment in the Office of the Chairman of the Joint Chiefs of Staff under Army Gen. Colin Powell.

In his post-service life, Snider became a leading scholar pushing the idea that a strong Army requires moral and ethical leaders who see what they are doing as a calling, not just a job.

“His teachings are cemented into our curriculum, where they will continue to positively impact students and faculty for decades to come,” said Maj. Gen. William E. Rapp, Army War College commandant, who called Snider “one of my personal heroes and inspirations.”

“Don Snider is an American treasure,” Rapp said. “Since his graduation from the U.S. Military Academy 54 years ago, he has dedicated his life to the Army profession.”

“Like the legendary mentor of Marshall and Eisenhower, Fox Conner, did in the 1920s and ’30s, Don has put his mark on literally thousands of Army leaders,” said Rapp, referring to Maj. Gen. Fox Conner, an 1898 graduate of the U.S. Military Academy who is considered one of the Army’s greatest mentors.

Rapp said to listen to Snider “speak so eloquently about what it means to be a professional, and how much work is needed to be done by leaders every day to prevent the Army from falling into the bindings of bureaucracy, is to be transfixed and energized.”

Lt. Gen. Robert L. Caslen Jr., who became superintendent of West Point in July 2013, said Snider has had “an immeasurable impact on the Army as a whole as well as on the thousands of soldiers he has led, taught and mentored.”

“As a key architect of the doctrine establishing the Army Profession and the Army Ethic, Don has been a leader in ensuring officers understand their roles and moral obligations as members of the profession of arms,” Caslen said.

“His ideas and scholarship also led to the content of West Point’s capstone course on officership, which continues to integrate much of his work on the Army profession. His input into this course ensures that future generations of West Point graduates will understand the Army profession and their moral responsibility to serve as commissioned leaders of character in the Army.”

Service Is a Calling

In Snider’s view, military service is a calling. “You cannot just walk around and declare yourself a profession,” he said in a 2012 lecture. “That doesn’t work.”

A profession, Snider said, requires expert knowledge gained through lifelong learning. It requires practice, adaptability to new situations, and measures of effectiveness. A profession requires being in a position of trust, with some autonomy, and also requires self-policing ethics and intrinsic motivation. It is not a job, he said, but “a lifelong calling.”

“If you find yourself doing the same work every day, that is the work of a bureaucrat,” Snider said. “If you are just here for the work, you picked a very arduous place to earn a paycheck.”

“The great challenge of a military profession in an increasingly pluralistic society is that we now have people coming into the profession who have far different and wide-ranging personal moralities than the institutional ethos,” he said.

Part of a profession is for the individual and institutional ethos “to be compatible.” What an institution believes is good, right and just may not be the same as an individual, he said. “This is a significant issue,” he said. “We have had some serious breaches of moral conduct in the Army.”

In a 2015 lecture at Fort Benning, Ga., Snider said it’s hard for the Army to relate to the rest of the nation “when only one-half of 1 percent of the American people ever touch or rub the Army, or the other armed services.”

“We have to earn the trust of the American people so they give us autonomy because you’ve got to have autonomy to be a professional. You don’t want Congress telling you how to do things,” Snider said.