There are many leadership books published each year, but the newest addition to the AUSA Book Program is truly unique. Breaching the Summit together the stories of six former senior enlisted advisors to the Joint Chiefs of Staff:

Each tells in their own words how they got their start, how mentors encouraged them along the way, and how they eventually became the highest-ranking enlisted member in their respective service. 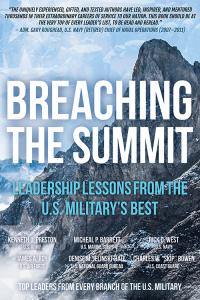 SMA Preston, who was recently appointed as an AUSA Senior Fellow, sat down with the Book Program to talk about the book:

AUSA: How did the co-authors come together as a group to write this book?

SMA Preston: All of the authors served together in the Pentagon at the same time for their respective service chiefs. The six of us formed an LLC called Summit Six, focused on leadership, team building, and relationships among employee workforces in businesses and organizations. Collectively, the group agreed to author a book on the key leadership principles and experiences from their careers.

AUSA: Many of the leadership lessons you provide relate to early phases of your military career. How did your role as a leader change when you were named Sergeant Major of the Army?

SMA Preston: My focus on leadership lessons as a young Soldier and noncommissioned officer set the foundation for leadership positions throughout my career. As the senior enlisted advisor to my service chief, supporting our Army and a nation at war with two countries, the operational pace of the Army was immense. During times of stress and long work hours, focusing on the fundamentals kept our units focused on standards and maintaining discipline among the ranks.

AUSA: What was your proudest achievement as an Army leader?

SMA Preston: There were many personal achievements anyone would be proud of during a military career. I believe as a leader, the greatest achievement is the group of leaders you develop throughout your career. Our role in the Army is to build the bench, the next generation of leader who will continue a legacy of service to our Nation.

AUSA: Your co-authors, also fellow former senior enlisted advisors to the Joint Chiefs, represent every branch of the US military. Do you feel that the different services call for different leadership styles?

SMA Preston: When you read through all six sets of experiences you will find they all come from humble beginnings prior to entering the military service. All six dedicated their lives to our Nation's military service and their respective service members. Their individual acts may differ, but in the end all were focused on excellence and led by their own example.

AUSA: What one piece of advice would you give to a young Soldier in today’s Army?

SMA Preston: Be a good Soldier every day, at work, at home, off duty and on social media. Treat people with dignity and respect. Be an expert in your profession, know your warrior tasks and battle drills, and be physically, mentally and spiritually fit. As you get promoted or you are given the opportunity to lead, use what you have learned to teach and make those Soldiers in your care as good as you were. Leadership and teaching go hand in hand as a noncommissioned officer, regardless of your rank, even as an SMA.

To order a copy of Breaching the Summit, please visit www.ausa.org/books.