During the weeklong celebration of the 101st Airborne Division’s 75th anniversary, soldiers and community members were invited to witness the inauguration of a champion of Fort Campbell at Division Headquarters.

The Champions of Fort Campbell program honors and recognizes the efforts of private-sector citizens in the local communities surrounding Fort Campbell in supporting the post.

Sheryl Ellis, vice president and general manager for Kentucky New Era Media Group, was selected to receive the award this year. Ellis said she was not expecting this accolade, but is grateful for the opportunity. 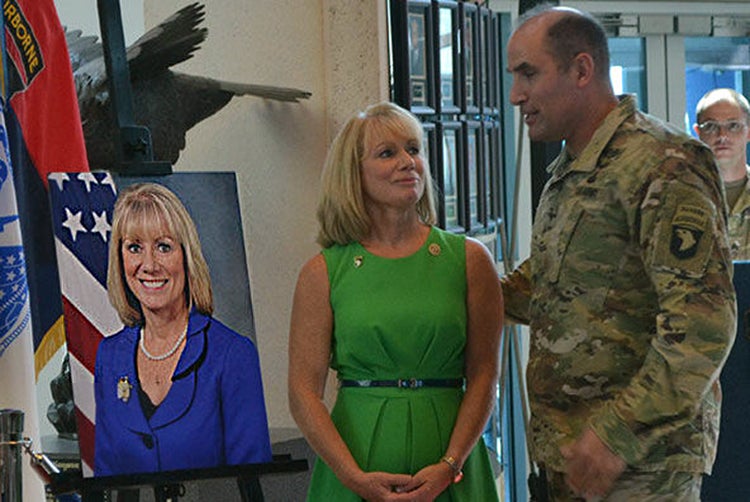 Ellis also has served as the Association of the U.S. Army’s Second Region secretary since 1998.

She also serves on AUSA’s Fort Campbell Chapter board and served as its chapter president from July 2013 to December 2014.

She is also chairperson-elect for Christian County Military Affairs.

Adding, “I thought he was calling to ask me to help with something on post. When he told me I was selected as a champion of Fort Campbell I was shocked. There were so many emotions, including tears.”

“The Champions of Fort Campbell program allows for the Fort Campbell community to give back to the local champions through recognition of the individuals for their hard work and support given to Fort Campbell,” Bankhead said.

Through her work with the Association of the United States Army, Ellis has served refreshments to waiting families at welcome home flights. She has lead and participated in several events including a Texas Hold ’Em tournament, an annual golf tournament, a 101-mile bicycle ride and a skeet shoot.

Ellis said these activities have helped to connect civilians with soldiers.

“Each is rewarding in its own right, but everyone should attend a welcome home ceremony, because it will touch you in a way you can’t explain or imagine,” she said.

She added, “When you see the excitement of a family [member’s] face in anticipation of their soldier coming home, whether it’s a parent, spouse or child, you can’t help but get excited too.”

Ellis also has volunteered with the Fisher House and the Armed Services YMCA.

“In 2005, I worked to bring Talking Service to Fort Campbell through a grant with the Kentucky Humanities Council and the National Endowment for the Humanities,” she said.

Adding, “Talking Service is a four-week program to bring veterans together for an open discussion about their experiences in the military service. The group enjoyed the program so much they extended it an additional two weeks.”

This year, Ellis attended the American Defense Communities conference in Washington. She said the conference was an enlightening experience because she learned how other installations support the military and she gained new ideas to bring back to Christian County, Kentucky.

“The annual Citizens for Fort Campbell trip is always a great way to support Fort Campbell,” Ellis said. “Meeting with Army leadership and discussing their needs and concerns and then taking that information to Capitol Hill. Maintaining a strong voice for Fort Campbell with our elected officials on both sides of Fort Campbell is very important.”

Ellis began volunteering at Fort Campbell more than 20 years ago through the Kentucky New Era (KNE).

The late Robert Carter, former chairman of the KNE board, and Chuck Henderson, its president and general manager, asked her to help with some programs through AUSA. Carter and Henderson have both previously been named Champions of Fort Campbell.

Growing up, Ellis was always surrounded by the military. Her dad served in the Air Force and her four uncles served in different branches of the armed forces.

Despite the long hours, Ellis said she continues to serve and volunteer because it is a way for her to give back to the community. She said others should join in because it is a rewarding experience.