SFABs Are Great, But They Can’t Build Nations

SFABs Are Great, But They Can’t Build Nations

The Army’s decision to create security force assistance brigades is the right decision at the right time. The Army is taking great pains to staff these units with the best people, place them in the right locations and create personnel systems that help sustain the initial quality. These efforts will pay big dividends for the Army as well as the nation. As necessary as these brigades are, however, they are not sufficient.

No analogy is perfect, but picturing an army as a spear does highlight several important features. At the tip of the spear are an army’s combat units, its fighters. At the far end of the spear’s shaft is a nation’s ministry of defense, and in between are the senior institutional army headquarters and echelons of command.

Security force assistance brigades (SFABs) are the near-perfect answer to sharpening the tip of any army’s spear, but they lack the capacity to harden the shaft. Combat power, fighting power, resides in the tip of the spear and is a function of six dimensions of confidence: each soldier’s confidence in themselves, their buddies, their training, their equipment, the leaders and the systems that are supposed to support them. The first five are relatively self-evident. The last is not, but its importance becomes clear upon just a minute of reflection.

A soldier’s confidence as well as the confidence of a unit decrease when the intelligence received is usually wrong or late; when fire support doesn’t arrive on time or on target—or at all; when trucks intended for transport don’t arrive or break down consistently; when the supply system routinely can’t deliver food, ammunition or critical equipment; or when senior headquarters issues late, ambiguous or conflicting orders.

Conversely, when these systems work, confidence and combat power increase. Confidence at the tip of the spear, military confidence, is a function of sufficiently capable systems that emanate from the end of the spear’s shaft and are delivered through interceding echelons of civil and military commands to the spear’s tip.

Hence, combat power and military confidence derive from a second form of confidence, institutional confidence, which comes from three sources. Ministries of defense that are sufficiently capable of executing eight important functions—determining the size and composition of the nation’s military services based upon the nation’s strategy, perception of the threat, alliances and socio-economic foundation; acquiring the personnel, equipment and weaponry for its military services; distributing individuals, units, equipment, supplies and weaponry as necessary; deploying the services as strategy and threat require; sustaining the services at home and when deployed; separating service members, equipment and weaponry when required; managing the funds provided to the ministry; and running the ministry and services in a transparent and accountable way.

The second source of institutional confidence comes from senior institutional military headquarters that can do well enough at translating the products of ministerial work into usable military goods and services for their particular services. These senior military headquarters may, for example, be organized around personnel and talent management; advanced military training—individual, leader and unit; doctrine development; combat, combat service and combat service support materiel development; and other specialty commands or administrative headquarters as necessary.

Finally, the third source of institutional confidence comes from echelons of military command that can act as the sinew connecting senior military headquarters with combat units at the tip of the spear. At all three levels, trust and integrity matter.

If ministries of defense, senior service military headquarters and echelons of command lack the systemic capacity to deliver goods and services effectively, efficiently and with minimum corruption to the tip of the spear, the result is eroded combat power. If the lack of systemic capacity is significant, combat power may be fleeting, if it exists at all.

An army is also a social construct, arising out of and reflecting that society. In this way, no two armies are alike, for they develop according to technical capacity, education level, social mores and other important aspects of a particular social-political community. That community must have confidence that its army will serve its interests, and the army must have confidence in the stability, longevity and legitimacy of the political community. Absent this mutual confidence, armies begin to break down and combat power suffers.

Understanding what an army is, a spear, helps identify the significant strengths of the Army’s SFABs and their shortcomings.

SFABs are nearly perfectly designed, organized and staffed to succeed in producing military confidence at the tip of the spear. That is, the leadership and skills resident in SFABs can create confidence within front line combat units and perhaps the first couple of echelons of command below the tip. SFABs can accomplish this mission well and in doing so, they can create important but short-term success. Depending upon how dull the tip of a particular army’s spear is, sharpening it may take many months—but SFABs are capable of the sharpening expected of them.

Without sufficient improvements in institutional confidence, however, that short-term success will erode quickly. Even when an SFAB improves the fighting skills, leadership and systems within front line units, those skills, leaders and systems ultimately emanate from institutional processes that run the length of the spear’s shaft. Long-term success at creating a self-sustaining army needs more than SFABs can offer. A sharp tip does not a spear make.

In some narrow sets of conditions—that is, when an army’s deficiency consists in tactical weakness only—SFABs are all that may be needed. Unfortunately, those conditions don’t reflect the norm. Quite the opposite. SFABs will normally be deployed in situations where tactical and institutional weakness abounds. SFABs do not have the capacity to address institutional weaknesses, nor should they.

Addressing institutional weakness and creating a self-sustaining army bring at least three difficult realities to the fore, for success at these tasks requires: leaders who have the right level of seniority and skill sets, a long-term focus, and a sufficiently productive national economy as well as a government that will prevail.

Such leaders are not those assigned to tactical units; rather, they reside in senior service headquarters, the joint staff, as well as the staffs of military and civilian departments. One answer to this requirement might be to create security force assistance divisions or corps, but such an approach would not really address the central issue. U.S. Army divisions and corps do not have the requisite skill sets to advise on institutional matters. 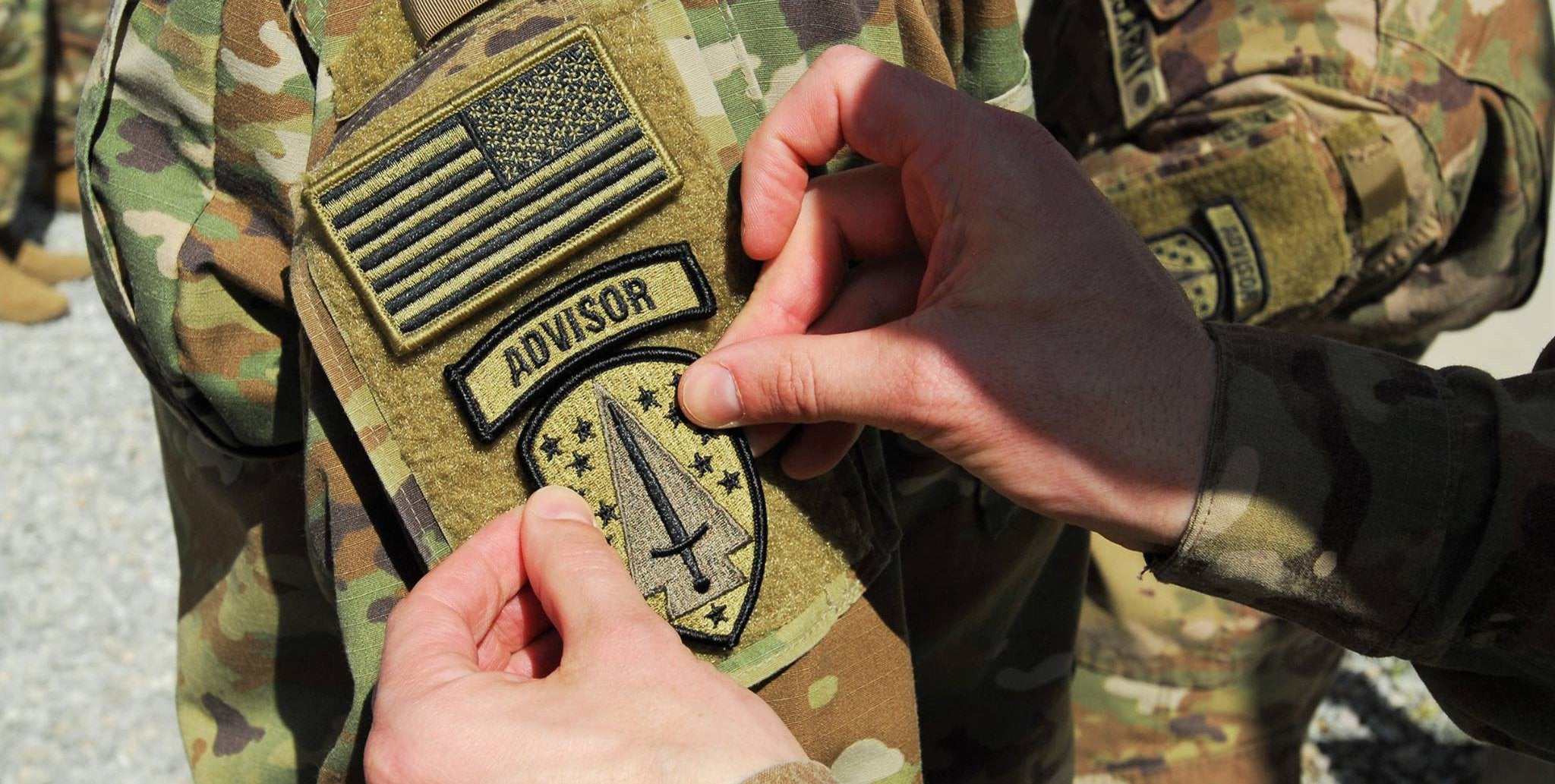 Divisions and corps lie in the middle of the spear’s shaft. On one hand, these units support and help maintain systems that produce combat power and military confidence at the tip of the spear. On the other hand, these units are recipients of what institutions produce—trained recruits and leaders, sufficient numbers of various types of units, adequate equipment and maintenance capacities, intelligence products, budget allocations, etc. Often the more senior staff officers in divisions and corps—and sometimes even the commanding generals themselves—are clueless as to how the institutional processes from which they benefit work.

Addressing institutional weakness and creating a self-sustaining army need a different solution. Some organization must be identified, then given the task to build a team—whose composition will differ relative to the country it is designed to assist—prepare that team for deployment, then sustain that team over the time necessary to build sufficiently capable institutional processes.

This is a large and difficult task, one that the U.S. has gotten right only episodically since 9/11. Furthermore, when the U.S. did get it right, it didn’t sustain the focus long enough to have the desired durable effect all hoped to achieve.

Even in the best of circumstances, building institutional capacity takes a long time. It takes even longer in countries whose bureaucracies are gutted by American policies (e.g., Iraq), countries with fledging bureaucratic capacity (e.g., Afghanistan and Libya) or countries whose bureaucracies are at war with themselves (e.g., Syria). There is no quick fix to this kind of institutional capacity-building problem.

Think of what a bureaucracy consists of: sufficiently capable managers and senior executives, a sufficiently trained workforce, stable funding, a stable government, low levels of corruption and repeatable processes.

Helping a nation create and develop its security sector institutional capacity involves more than what most people think about. The U.S., if it is serious about the task at hand, should rethink its approach to offices of security and cooperation. Traditionally, these offices have had too narrow a focus on delivering military equipment and the individual training necessary to use that equipment. That focus does nothing to address institutional capacity.

Perhaps the U.S. should consider, for those situations that demand it, some type of Office of Security Sector Assistance or U.S. Security Sector Development Group specifically designed for such a task. Then staff that office with the requisite leaders and skills and place the office under the ambassador for long-term direction and integration with other development activities. Such an approach would be in line with the third requirement associated with addressing institutional weakness and creating a self-sustaining army.

Armies are supported by their nation’s economy. A strong oil sector, for example, helped the Iraqis grow their army in 2007 and 2008. When the price of oil dropped in late 2008–2009, it affected Iraq’s ability to sustain the army it needed. Luckily, the price of oil improved and held itself at a sufficient level through 2014, but it dropped again, which had a negative effect on Iraq’s ability to fund the army it needs.

Afghanistan is in a worse situation; it simply cannot afford the army it needs. More to the point, without significant and continued development assistance from the U.S. and other contributing countries, its army will not be self-sustaining for some time to come. Sufficiently productive economies are a necessary condition for self-sustaining armies.

A government that will prevail is also vital for an army. In stable, mature states, citizens take the continued existence of their government for granted. Not so in states that are still struggling to prevail against either internal or external threats.

The reason is simple: Soldiers not only risk their lives for their government, but also put their families’ futures on the line. If the enemies they are fighting win, nothing good will happen to them or their families.

Afghanistan and Iraq are two good examples. The return of the Taliban is a real possibility, at least in the hinterlands and ultimately maybe even in major cities. A bet the Afghan government will ultimately prevail is not a sure bet, and for Afghan soldiers, the ante is one’s life and that of one’s family. Iraq was a similar case, especially in 2006–2007 then again in 2013–2014 when it was far from sure that Nouri al-Maliki’s government would prevail.

Institutional capacity, a sufficiently robust economy, and a government that will prevail—all combine to show that an approach that puts primary focus on training and equipping, or a strategy that is overly focused on building tactical military proficiency, will not work over the long term. Simply put: Creating a self-sustaining army demands much more.

The U.S. Army has done the nation a great service in creating SFABs. These formations will deliver the results they are designed to achieve: significant improvement in a foreign army’s tactical proficiency. Now the nation has to step up to finish the job by creating a capacity that can address what SFABs cannot: the associated institutional, economic and governmental capacity required to create a self-sustaining army. Otherwise, the SFABs will be just another tactical success leading to strategic failure.