In the long and storied 243-year history of the U.S. Army, the exploits of Sgt. Alvin C. York on Oct. 8, 1918, in the Argonne Forest in World War I stand as one of the all-time greatest individual feats of an American soldier. In battle that day, then-Cpl. York killed 25 Germans, captured 132 and knocked out 35 machine guns.

After the war, York excelled as a contributing citizen to his community and nation. He worked to improve the lives of the children in his rural Tennessee community, especially in the area of education, and helped promote the homefront war effort during World War II. His life is a shining example of a Soldier for Life. 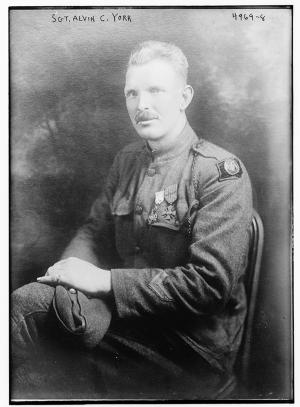 York came from humble beginnings. He was born on a farm near Pall Mall, Tenn., on Dec. 13, 1887. Raised in poverty as one of 11 children, he worked to help support his family, particularly after the death of his father. He was prone to fighting and drinking as a young man. However, after finding God in early 1915, York’s life changed dramatically. He became a solid citizen of his community.

Meanwhile, World War I was raging in Europe, Asia and Africa. When the U.S. declared war on the Central Powers in April 1917, the Selective Service Act of 1917 instituted a draft. York was notified to register. Though he had asked for an exemption from the draft for his religious beliefs, identifying himself as a conscientious objector, his request was denied, and he was subsequently drafted. He reported to Camp Gordon, Ga., in November 1917; he began training while wrestling with his conscience as he pondered the Bible’s Old Testament admonition against killing.

York’s chain of command, specifically his battalion commander, Maj. George Buxton, and his company commander, Capt. E.C.B. Danforth Jr., won his respect and admiration for their professional and understanding methods of leadership. Granted a pass to go home to ponder his situation in March 1918, York decided to go with his unit to war.

Shortly after World War I, York visited the hill where his heroics occurred.
(Credit: Library of Congress)

In February 1918, York was assigned to the 82nd “All American” Division. He deployed to France in April 1918. Before moving to the front, York stayed true to his Christian beliefs, avoiding alcohol, cursing and fighting. His favorite companions were his Bible and his diary. His unit, G Company of the 328th Infantry Regiment, moved toward the front in July 1918. As part of the 82nd Division, they were destined to push forward in the Meuse-Argonne Offensive beginning in late September until the armistice on Nov. 11, 1918.

The offensive was an all-out push by the Allies across the Western Front in Belgium and France to break the German defensive lines. The offensive would eventually place growing pressure on the German defenses in and around the Hindenburg Line to wear down and ultimately break the Imperial German Army. Nine U.S. divisions began the assault, followed by four divisions in reserve. The number of units engaged would grow as the fighting continued.

On the day of his historic action, York was part of a 17-man section moving just behind German lines looking for a gap for his company to advance in the Argonne Forest. The terrain was wooded, hilly and marshy, and the Germans had had four years to fortify it. The Argonne Forest fighting has been described as similar to the Hürtgen Forest fighting in World War II in Germany, a terrible place for a battle.

York’s company was tasked with moving over a hill and cutting the German resupply route, the Decauville Railroad, in the center of the forest. York’s company took heavy fire and suffered casualties. That led to the 17 men, under Sgt. Bernard Early, moving to find a gap in the German lines to flank and silence the machine guns holding up the advance.

Surprising some German medics as they moved deeper behind the enemy’s main line, the Americans followed the fleeing medics into a German command post, taking the command post by surprise and capturing the Germans there. While rounding up their prisoners, the Americans came under fire from nearby German machine gunners. The German fire killed several American soldiers and badly wounded Early, leaving York in command of the remaining troops.

York began shooting from the prone position with his bolt-action rifle, picking off German machine gunners as they raised their heads to spot targets. The prone firing position was familiar to York from his days of shooting matches in the Tennessee hills. At one point, six Germans tried to rush him. York killed them with his pistol, shooting from the farthest to the closest, a shooting trick he learned from his turkey hunting days back home.

The German major at the captured command post, seeing York’s shooting, offered to signal the remaining Germans to surrender. York agreed, and the surviving Americans took 80 to 90 German prisoners and had them carry the three wounded Americans as they began moving toward American lines. Going back through the German front line, York forced the major to signal German units around them to surrender, eventually winding up with 132 prisoners. In the fighting, York killed 25 Germans and silenced 35 machine guns.

York saw additional fighting up until Nov. 1, 1918, when his unit was pulled back to a rest camp. Word of the Nov. 11 armistice reached York’s unit while they were recovering at Aix-les-Bains. As was his habit, York went to church that day, wrote home and read a little. He was glad the fighting was over.

Word of York’s incredible feat spread through the ranks and he received various decorations for his exploits. Marshal Ferdinand Foch, Supreme Allied Commander in 1918, said when decorating York with the Croix de Guerre, “What you did was the greatest thing accomplished by any private soldier of all the armies of Europe.” Gen. John J. Pershing, commander of the American Expeditionary Forces, presented York with the Medal of Honor in 1919.

Amazingly, York’s exploits were unknown to the American public until The Saturday Evening Post ran an article about him on April 26, 1919. The publicity turned York into a national hero. Though offered numerous financial opportunities upon his return through New York City to Tennessee, York declined them all. He continually stated, “This uniform of Uncle Sam’s ain’t for sale.” He sought a return home to Pall Mall, respite and marriage to his fiancée Gracie.

A statue on the grounds of the Tennessee state capitol in Nashville honors York.
(Credit: Sgt. York Patriotic Foundation)

York then dedicated himself to bettering his community. He successfully petitioned the Tennessee Department of Highways and Public Works to build a road through the mountains around his home. This galvanized the surrounding counties to do the same, providing a much-improved road network in that area of the state.

He then began a push to get a modern school in the area, a dream realized in 1929 when the York Agricultural Institute opened, named for him. York also pushed for military preparedness leading up to World War II, then tried to enlist upon the United States’ entry into that war. Denied enlistment due to poor health, he was commissioned as a Signal Corps major and traveled to help sell war bonds and inspire recruits at training bases.

York suffered from strokes, pneumonia and failing eyesight in his later years. He passed away in Nashville, Tenn., on Sept, 2, 1964.

York’s life story has been told in several books. In 1940, he agreed to the cinematic telling of his story by Warner Bros. in the Howard Hawks’ movie Sergeant York. The movie was the highest-grossing film in 1941, and Gary Cooper earned an Academy Award for Best Actor for portraying the title character. York is also recognized in the U.S. Army Center of Military History’s American Military History textbook used by Army ROTC departments to this day.

York exemplified Army values in his life. His personal courage in combat, his selfless service to his community in using his fame to better their lives, his loyalty to God and nation in his conduct during and after World War I, and his sense of duty to serve in one war and volunteer to serve in another stand as shining examples to all who serve.

A graphic novel about Medal of Honor recipient Sgt. Alvin C. York was released by the Association of the U.S. Army on the 100th anniversary of York’s heroic deeds during the Meuse-Argonne Offensive. This first illustrated digital book published by AUSA is available here: www.ausa.org/york.