Radical Redesign: British Army Changes in Step With Its US Counterpart

Radical Redesign: British Army Changes in Step With Its US Counterpart

The U.K.’s recent Integrated Review of Security, Defence, Development and Foreign Policy has important consequences for the British Army, which in turn will affect its interactions with the U.S. Army.

The U.K. government determined in late 2019, directly after its election, that “the most radical assessment of the U.K.’s place in the world since the end of the Cold War” was required. It is vital to understand the inclusion of defense as just one component of this comprehensive study, and the significance of such a pandepartmental approach to defining the nation’s future direction.

Clearly, Britain’s Jan. 31, 2020, departure from the European Union, known as Brexit, was an important driver of the ambition behind the study, but importantly, the process was initiated well before COVID-19.

The Integrated Review revolves around a vision for the country in 2030. It includes a “Strategic Framework that establishes the Government’s overarching national security and international policy objectives, with priority actions, to 2025.”

It is conceptually similar to the U.S.’ multidomain integration work. Critically, the review’s assumptions were substantially bolstered by the November announcement of a 14% increase in the U.K. defense budget over four years, within which 85 billion pounds (approximately $118 billion) is earmarked for new equipment and support. Of note, within this uplift is a significant portion earmarked for investments in cyber and space, including establishment of a National Cyber Force and a U.K. Space Command.

A week after the review was published, the Ministry of Defence’s Defence Command Paper was issued, followed shortly by the Defence and Security Industrial Strategy. This intellectual process has been thorough, progressive and coherent across government, and inclusive of the private sector.

The British Army’s end strength will fall, from a target figure today of 82,500 regular soldiers (U.S. active component equivalent) to a new level of 72,500. This has been a conscious tradeoff, and there is solid logic behind it. The Army will receive the largest investment of all three services to make it more mobile, better protected and more lethal.

There is important context to consider here. The British Army has neither reached nor maintained 82,500 (the real number is around 76,500 on average). So, the reduction is more accurately around 5% (as opposed to a notional 12%).

That 72,500 is approximately 1.1% of the U.K. population, whereas 485,000, the size of the U.S. Army active component, is about 1.5% of the U.S. population. These positions are relatively comparable, as are the force structures they aspire to service.

In the words of our Chief of General Staff Gen. Sir Mark Carleton-Smith, we will be a “smarter, harder, sharper, more dangerous Army.” We will be more persistently engaged globally, and will retain our ability to fight at the divisional level (tested in April alongside a French divisional headquarters in Texas under the command of the U.S. Army’s III Corps during the Warfighter 21-4 exercise).

We will modernize and retrain in step with the U.S. Army. Such is the quality and extent of our work together on this effort that our plans are already remarkably well aligned. The British Army’s eight capability priorities mirror U.S. modernization plans. For example, the British Army’s future Digital Backbone parallels the U.S. Army’s modernization of its network technologies. [For more, see chart, Page 29.]

This is a generational opportunity to design interoperability collaboratively, starting with networks. It is founded on our top key tenet that the U.S. remains the British Army’s partner of first choice. And its implications already (and not by accident) infuse our bilateral Strategic Vision Statement, our five-year plan, our Memorandum of Agreement and our privileged involvement in Project Convergence, an effort to test and develop new technologies.

First, we will restructure our existing brigades into brigade combat teams (to reflect the integration of combat support/combat service support at lower levels).

The 3rd Division will remain the heart of our warfighting capability, leading NATO with two modernized heavy brigade combat teams. We will address an overdue prioritization in warfighting investment in favor of the deep battle, to include a deep reconnaissance/strike brigade combat team (not dissimilar to the U.S. Army’s former armored cavalry regiment concept); to find and strike by connecting longer-range artillery, electronic attack and attack helicopters with Ajax and unmanned aerial systems.

We will also include an information maneuver group, somewhat like the Intelligence, Information, Cyber, Electronic Warfare and Space unit in the U.S. Army’s Multi-Domain Task Force, to enable greater competitive edge in this area.

The 1st Division will consist of two light brigade combat teams: one light mechanized and the other light infantry. The 1st Division will also have an information maneuver group and a security force assistance brigade to operate alongside indigenous forces forward and to build their capacity.

The 6th Division will continue to provide our information maneuver core in the 77th Brigade, but will also grow a new Ranger Regiment (consisting of four battalions selected from across the Army) designed to support and conduct special operations discreetly in high-risk environments. The supporting logic is not dissimilar to that which originally gave rise to the U.S. Army’s Green Berets.

We will formalize our Combat Aviation Brigade Combat Team, and its relationship with our Air Manoeuvre Brigade Combat Team will generate our Global Response Force (for which the responsibilities of the U.S. Army’s 82nd Airborne Division are an exact parallel).

We will establish a permanent unit dedicated to radical experimentation to maintain our technological edge, similar to the U.S. Army practice of dedicating a brigade combat team to experimentation.

We will switch focus from “fight” to “operate,” recognizing that prevention is better than cure. We will be persistently engaged, with more of our Army deployed overseas more of the time. This includes a “tilt” to the Indo-Pacific, but for the Army, it will exploit in particular our network of overseas bases in Oman, Kenya, Brunei, Belize and Germany.

Finally, we will continue to develop the equipping, training and employment of our 30,000-strong Army Reserve. In parallel, a new Army Industrial Strategy will consider the best ways to work with the private sector—domestically and internationally—to realize maximum capability gains at the best possible value for the money.

Much of the language the British Army proposes to adopt will strike a chord with American soldiers—among it, brigade combat teams, security force assistance brigade, Ranger Regiment and Global Response Force. The adoption of U.S. Army terminology is no accident and merely formalizes what we already know—that our armies think, train and operate in strikingly similar ways.

But we will not imitate the U.S. Army for its own sake. What will not change as we work toward this new model is the “Britishness” that marks our soldiers and our structures, and the same hunger for professional excellence.

But now, in place of a potentially hollowed-out force wrestling with expiring legacy equipment, expect a reenergized force, enabled with the latest kit, trained and equipped to the divisional level, and persistently engaged and visible in more places around the world.

This is genuinely exciting, and we look forward to making the journey side by side with the U.S. Army enterprise. 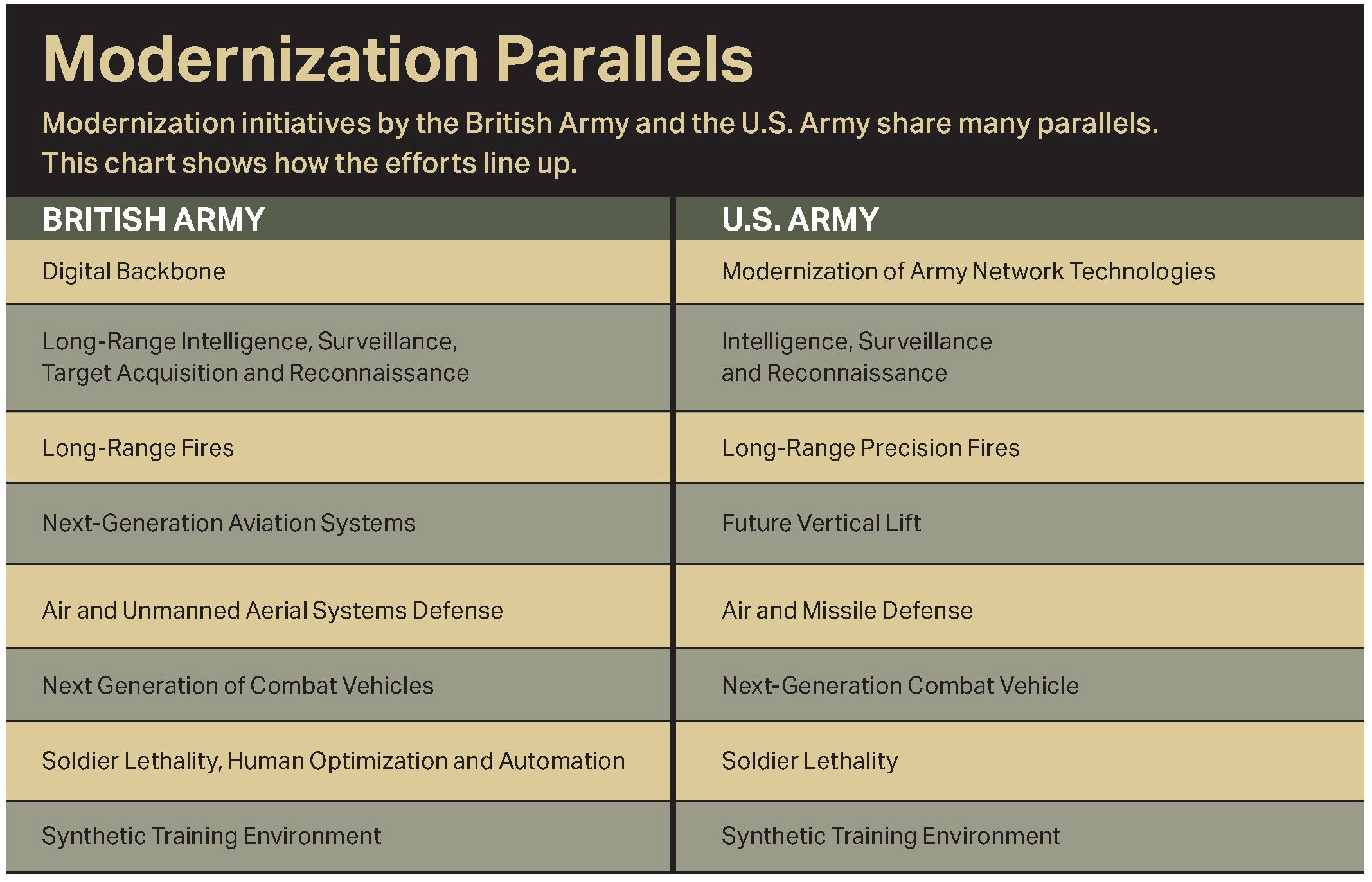 Brig. Paul Tennant, British Army, is the British military attache to the United States. Previously, he spent a year studying at the Royal College of Defence Studies, London. Before that, he was chief of the Joint Fires and Influence Branch, Headquarters, Allied Rapid Reaction Corps, NATO. He also served on exchange to the U.S. Army as special assistant to then-Chief of Staff Gen. Raymond Odierno. He is an Army aviator and served on multiple deployments in Northern Ireland and Afghanistan.