A Question of Balance

In 1970, the Moody Blues, a rather innovative British rock band, released their sixth collection. The group was known for “concept albums,” tying all of the songs to a central theme. This one didn’t disappoint. Released in the middle of the grim Russian-American Cold War, coincident with the grinding later years of the fighting in Vietnam, the album raised—and tried to answer—questions of “hate and death and war,” to quote from one of the songs on the album. The Moody Blues called it A Question of Balance. It was typical of the era. Today, it’s a quaint period piece from another century, yet their provocative lyrics and haunting melodies got one thing dead right: When you talk about war, and especially preparing for war, it’s always a question of balance.

Americans have known this from the outset. America’s Army, established on June 14, 1775, predated the country itself by more than a year. Yet going all the way back to those desperate first days on Lexington Green and Concord Bridge, we faced some challenges with balancing our effort. Brave minutemen, rallying from farms and villages, reported quickly for duty. For amateurs, they fought well. We like to trumpet the successes. Schoolchildren hear of a bold stand at Bunker (Breed’s) Hill, a daring night raid at Trenton, a spirited fight at Monmouth, a neat maneuver at Hannah’s Cowpens, a good afternoon at Guilford Courthouse and, finally, a successful siege at Yorktown.

Nevertheless, in our rightful celebration of independence won, we avoid some unpleasant truths. Our untrained, part-time bunches of volunteers struggled in battling skilled, tough, well-led enemy regiments. We had a few long-service Continentals but, in the final reckoning, too few. We got the balance all wrong. As a result, British Regulars and their Hessian auxiliaries won almost every stand-up fight. They handily took New York; Philadelphia; Charleston, S.C.; and Savannah, Ga., and ranged where they chose for eight years. Historians note that the Patriots enlisted about 400,000, and the British never numbered much more than a tenth of that force. In the end, the British lost heart and quit, urged on their way by a French expeditionary force.

Well, winning ugly is still winning. In the next round, the War of 1812, we resorted to what we figured to be a winning formula. If anything, it went worse. Distracted by the main effort against Napoleon’s French armies, the British and Canadians deployed an average of about 16,000 men. We eventually called up about half a million. We did not take Canada—far from it, as we watched Redcoats burn our capital city and very nearly snap up Baltimore in the bargain. Our biggest victory came after the formal end of the war, when an overly aggressive British commander chose to charge across open ground into the muzzles of defending Americans at New Orleans. Once again, we got the balance all wrong, getting little practical military utility from a tiny active force, a late call-up of rather disorganized militiamen, and an attempt to substitute will for skill. We were fortunate to escape with a draw.

We have seen the pattern repeat itself time and again. You can read all about it in the classic historical compendium America’s First Battles: 1776–1965, edited by Charles E. Heller and William A. Stofft, which features the writings of some of our country’s premier military historians. We have a bad habit of getting the balance wrong. The Revolutionary War and the events of 1812–15 set the template. We have followed it all too often—not always, but often enough that we should know better.

One of our wisest military leaders, and arguably our finest strategist, considered just this matter during the early months of World War II. On December 28, 1939, Gen. George C. Marshall, Army Chief of Staff, spoke to the assembled luminaries of the American Historical Association and the American Military Institute. Imagine that audience, composed of the greatest historical scholars of the era. They understood the world situation better than most Americans, and they knew that when the world war came to the United States, reliance on the usual trends did not bode well for a rapid or effective response. 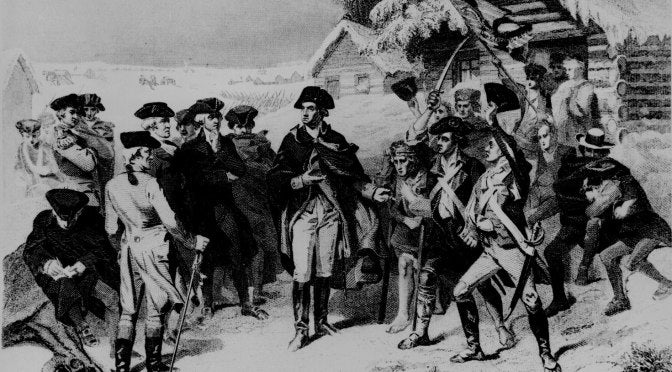 No mean historian himself, Marshall offered a tough message for that august gathering. In their lectures and writings, the assembled professors had too often reinforced comfortable popular legends at the expense of hard facts. Marshall recounted “the old story of unpreparedness.” He reminded them of the numbers from the Revolutionary War and War of 1812, the bloody fumbling of the Civil War, the confused frustrations of the 1898 war with Spain, and the maddening delays and miscues in World War I. Now, the vital matter was again on the table. Would America get it right this time? Or would the country fall back into “the next chapter of repetitions”? Marshall challenged the historians to do their part. “The influence of a well-informed public,” he concluded, “is of profound importance.”

Marshall’s words of 1939 went unheeded. Heller and Stofft’s book includes accounts of what happened at Buna in New Guinea in 1942 and Kasserine Pass in Tunisia in 1943. Those two battles demonstrated the same old recipe: A small active cadre, a hastily raised, partly trained citizen-soldier force, and potent, veteran foes resulted in costly American reverses. Once the war starts, it’s too late to get the balance right.

We have seen mixed outcomes since Marshall’s time. In Korea, we went in out of whack and paid. In Vietnam, we started out OK but never mobilized most of our National Guard or Army Reserve, and as a result we came out far worse than we entered—an unwelcome reversal of the usual narrative but just as much out of balance. The Gulf War of 1990–91, the Balkans intervention later in that decade, and the Afghanistan and Iraq campaigns found America’s Army in pretty good balance at the outset of each operation. To borrow from former Secretary of Defense Donald Rumsfeld, you go to war with the Army you have. We had a pretty good one: active, Guard and Reserve, trained and ready, and about as balanced as they needed to be. When the country called, America’s Army delivered from the start.

Now, the conventional phase of the global war on terrorism is winding down. Driven by money matters, mesmerized by technological promises of drone warfare and precision strikes, sickened by 14 years of face-to-face firefights in faraway, unhappy places, we again hear voices calling for a drastic reduction in our active ranks. Some propose never again to fight a ground war at all. It’s a nice thought, but as people live on the land, it’s unlikely. The citizens of Ukraine learned that the hard way in March. There will be more such pain, and sometimes it will draw in the United States, ready or not.

Others argue from our national tradition. Keep a small active force, as small as it can be, maybe even a bit smaller. Then, if trouble brews, call up a more numerous National Guard and Army Reserve. In the meantime, they’re a bargain: 39 days a year of funded cost versus 365 days for a Regular. Of course, Marshall warned about that old saw in stark terms, as our “most serious military problem,” leading to “plights and frights” and eventually to “military arrangements emasculated.” How many first battles do we need to lose to (re)learn that hard lesson?

Our war planners today know their business. They will tell you, if you have a mind to listen, that the requirement for our country to stand ready for trouble at home and carry out its current obligations overseas—including forward stationing in the Pacific and Europe, following up in Afghanistan, and preparing for contingencies in northeast Asia or the Middle East—demands 550,000 soldiers. That’s the operating strength, and it can be (and is) a mix of active, Guard and Reserve forces. How much of each element remains to be determined. We will do well to listen carefully to our Army leadership—active, Guard and Reserve—as we sort out the proportions.

If nothing else, the hard years of war in Afghanistan and Iraq remind us that it is not realistic to think we can keep units ready with only 39 funded days of training. That’s a model from another era. It no longer works (if it ever did). Today, we make up the gap between 39 days and reality drawing on the sweat and dedication of Guard and Reserve soldiers who work days, nights and weeks on end without compensation. That’s unfair to employers, not right for Guard and Reserve families, and deceptive to the American citizens who believe they’ve gotten a 39-day bargain-basement deal. The Guard and Reserve proportion of the 550,000 that will make up America’s Army operating strength deserves the right resourcing of full-timers and training days to be truly ready. Between wars, readiness costs time and money. Once the bullets fly, the price gets a lot higher, mortally so. One way or another, we will pay for it.

So there it is. Whether active, Guard or Reserve, all 550,000 must be trained, equipped and ready. There’s no military equivalent of instant coffee, where you just add water and boil a bit and you’re good. The days when a citizen could pull his Kentucky long rifle off the mantel and be ready to go in a minute are long gone. Gen. George Washington thought as much way back in 1775. He insisted on a hard core of well-trained, well-equipped Continentals. With never enough, the war dragged on for eight long, difficult years.

Modern war is not a part-time affair. Our National Guard and Reserve soldiers train far more than the famous 39 days a year when they prepare to deploy, and we would want it no other way. Now we must fund it. Our country’s landpower depends on trained, equipped, ready manpower. George Washington called it back in 1775. George Marshall echoed it in 1939. Even the Moody Blues got it in 1970. It is indeed a question of balance. We know the requirement is 550,000. It’s past time to get the balance right.