In his first day as the 40th Army chief of staff, Gen. James C. McConville declared that people are his No. 1 priority.

From soldiers and family members to veterans and Army civilians, the Army is about people, McConville said during his Aug. 9 swearing-in ceremony, and he’s not wasting time putting his promise into action with sweeping initiatives designed to better identify and manage soldiers’ and civilian employees’ talents and skills.

He also has identified five priorities to improve quality of life for soldiers, veterans and their families, including better housing and health care.

“People are the Army,” McConville said. “Without our people, we’re just a bunch of combat equipment sitting in motor pools, hangars and arms rooms.”

Over the past two years, the Army has worked hard to restore its readiness levels, and as it transitions from almost two decades of counterinsurgency and counterterrorism operations in Iraq and Afghanistan, the service is at an inflection point, McConville said.

“At the tactical level, the Army is ready to fight and win on any battlefield tonight, so I feel very, very good about that,” he said. “But what I would tell you is the Army also, I feel, is at an inflection point … where we’re entering an era of great-power competition with China and Russia.”

To meet the challenges of fighting a near-peer adversary, the Army must not only modernize its equipment, but it also must adopt a new concept for the way it fights and put in place a 21st-century talent management system, McConville said.

“Winning matters,” he said. “You send the United States Army somewhere, we don’t go to participate. We don’t go to try hard. We go to win because there’s no second place or honorable mention in combat.”

One major focus is to make sure the Army is putting the right people in the right jobs, McConville said, and much of that effort hinges on getting the three Army components onto one personnel system.

The Integrated Personnel and Pay System-Army (IPPS-A) is an online, data-driven human resources system that will combine personnel, pay and talent management capabilities into a single place.

The Army has fielded it to the Army National Guard in nine states, with plans to have it in every state over the next year. The rest of the Army will follow suit over the next few years, McConville said.

“The value of this is it’ll allow us to see the talents of all our soldiers with one system,” he said. “We’ll be able to incentivize them with pay for their knowledge, skills and behaviors.”

The Army is also putting in place the Army Talent Alignment Process, which allows active-duty officers to showcase their talents, knowledge and skills to commanders who are looking to fill jobs within their formations.

“It’s almost like applying for a job,” McConville said about the talent alignment process. “We believe that in order to keep the best talent, we have to compete for it.”

Today’s soldiers—and the young people the Army is trying to recruit—don’t want to be treated as “interchangeable parts” in an industrial age system, McConville said.

The Army is filled with soldiers who have talents and skills beyond their rank and MOS, and the Army needs to find a way to harness those abilities, McConville said. 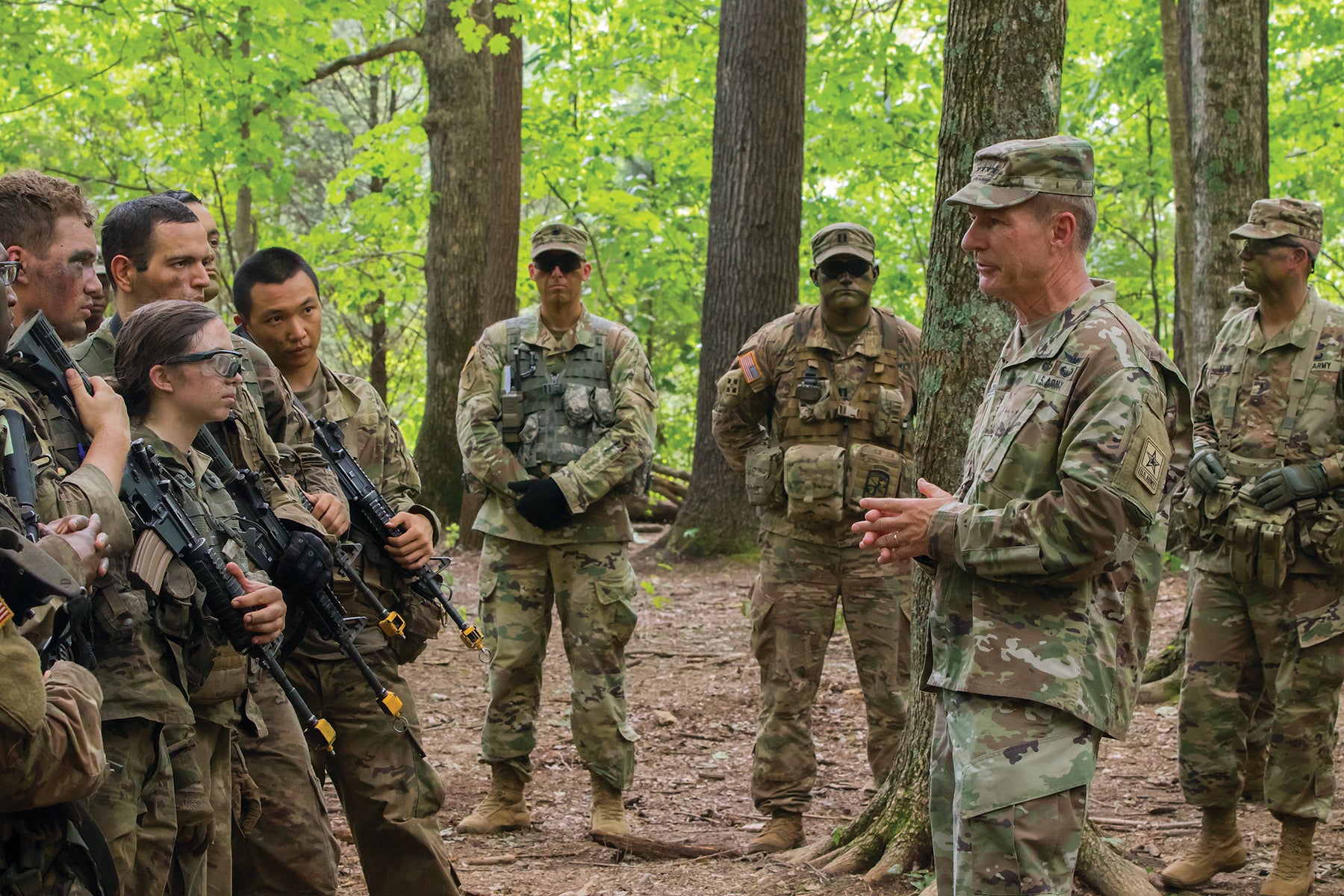 To lead a new Chicago-based organization tasked with building the Army brand and marketing, the service tapped a U.S. Army Reserve logistics officer who is a vice president for marketing in civilian life, McConville said.

McConville has some experience in tapping into soldiers’ additional skills.

As a one-star in Afghanistan, as the U.S. military prepared for the troop surge in 2008, McConville tasked the Army National Guard and Army Reserve soldiers assigned to him with filling out a spreadsheet listing their civilian jobs.

“I found out I had a sergeant who owned an engineering design firm and was an engineer. He’s the one that actually designed most of the combat outposts and forward operating bases in Afghanistan for that time,” McConville said.

A major who worked for the Texas highway department was tasked with helping design roads, while farmers from Nebraska and Iowa were called to help Afghan farmers.

“We found that if we could take their talents and actually apply them to the problem set, we were much better off,” McConville said.

Another initiative McConville is assessing now is a pilot program to test a new way to select battalion commanders. Under the Battalion Command Assessment Program, the Army brought the 30 or so officers chosen as alternates on the infantry and armor battalion command list to Fort Benning, Georgia, for a four-day assessment.

Battalion commander is arguably one of the most important leadership positions in the Army, he said. Battalion commanders and command sergeants major “influence the future of the Army probably more than anyone else because all the new soldiers, all the new officers, new NCOs, they’re coming to these battalions, and when they look up, the type of leadership they receive is usually going to determine whether they stay in the Army or they get out of the Army,” McConville said.

These officers also are the Army’s future leaders, he said, adding that only about 10% of officers in a year group will be selected to command a battalion.

The Army continues to assess the success or viability of the pilot program, but the recent test did shake up the alternate list. An officer who had a “piece of paper that was not well written because of circumstances” came out on top after the four-day assessment, and he will go on to command a battalion, McConville said.

“What I think will happen is people will start looking at it and they’ll go, ‘I’m more interested in developing my talents and being a good leader’ than worrying about a zero-defect piece of paper,” McConville said.

McConville isn’t afraid to shake up the system, citing as an example a highly trained cyber soldier who was nearing the end of his enlistment.

“We had this young person who had the opportunity, probably, to make mid-six figures if he left the Army, and he made one request,” McConville said. “He said, ‘I will stay in the Army if you make me a GS-13.’ There are 10 people that have [his] skill set in the world, and our system had a hard time with that.”

The way he was being managed, that soldier would typically have only been able to enter the civilian system as a GS-6 or -7. But McConville stepped in, adding that “if you have anyone else with that talent, I will make them all GS-13s.”

McConville knows it’s going to take time to implement such a fundamental shift in how the Army manages its people, but he is convinced it’s critical to the service’s success.

McConville also is focused on soldiers outside work.

“One of the things, when you’re talking about people, is recognizing the type of force that we have,” he said. More than 50% of soldiers are married, and a little more than that have children, he said. Many soldiers have spouses who have careers and want to continue their employment.

At the top of the list is housing, to include the barracks. “We’ve had problems with housing, and we’re owning it, we’re fixing it,” McConville said. “We’re holding our private partners accountable and making sure that they invest and recapitalize the housing.”

The Army also is paying close attention as the service transitions its medical treatment facilities to the Defense Health Agency under a sweeping DoD reorganization. “We’re watching that very closely because we realize that quality health care is very, very important to our soldiers and families, and we want to make sure, along with our retirees, too, that we maintain that.” 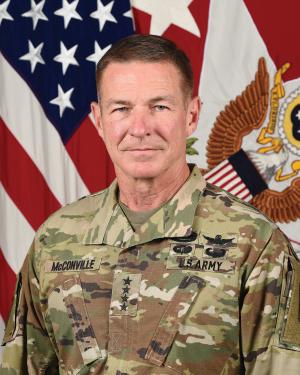 The Army also is looking for ways to provide more access to quality child care and overcome, in some locations, a shortage of qualified child care providers. “We have good child care, but it can be better,” McConville said. “I’m never happy with what we have. We want to be the best, the best there is.”

Another ongoing effort looks to make it easier for spouses to get or keep employment, whether it’s transferring licenses from one state to the next or looking for ways to keep soldiers and families at the same duty station for longer periods of time.

The fifth priority is improving PCS moves, in response to widespread problems during recent moving seasons, when families dealt with delayed or broken furniture and other issues. “There’s a trucking crisis in the country right now,” McConville said. “We don’t have enough people in the country that want to drive trucks and move heavy furniture.”

The Army has two options, he said. It can incentivize people to do their own moves or it can move them less frequently.

Looking ahead, McConville said he’s confident the Army is on the right track.

“We’ve made some good gains over the last two years,” he said. “We don’t want to lose any momentum on what we’re doing. We’re at a good place in the United States Army right now, and we’re trending up.”

The Army must continue on this track, to include pushing ahead with its six modernization priorities, to stay ahead of the competition.

“We need to make sure that we have an Army that’s ready now and is fully modernized,” he said.