A recurring cliché of Hollywood war movies is the newbie lieutenant who falls to pieces in his first battle and has to be rescued by his crusty old platoon sergeant. It is a trope of which I am heartily tired. And yet, I am compelled to admit that in the U.S. Army, it has a basis in reality. We, as an Army, have a moral obligation to do everything we can to ensure that our newest officers are capable of meeting and mastering the first shock of combat they encounter as small-unit leaders. We have this moral obligation, not to prevent Hollywood from making more clichéd war movies but to save the lives of as many of our magnificent enlisted soldiers as we possibly can. We have this moral obligation to bring into our Army the strongest junior officers we can because having such officers improves the odds of winning the battles and wars the American people ask us to fight. We need to make sure new lieutenants are more reliably shock-of-battleproof than new lieutenants have all too frequently been in the past.

I believe we should adopt, with appropriate changes, a few specific aspects of how the old German army selected and trained its junior officers. Certain traditional German practices can be modified to make a good fit on American Army culture.

First, however, I must make the necessary caveats about the dangers of emulating German military practices. We do not want to catch the German disease of winning battles but losing wars.

It is the consensus of most military historians that Germany lost both world wars because at the strategic level of war, it was bankrupt. In both World War I and World War II, it was the victim of its own arrogant folly in taking on coalitions of enemies whose combined resources of men and materiel were multiple times those of Germany’s. But those same military historians mostly agree that at the tactical level of war, the German army, when at the top of its form, was a showpiece of excellence. Granted, by the late summer of 1944, the American Army had overtaken and surpassed the Germans in quality at the tactical as well as the strategic levels of war, but that was only because of the catastrophic attrition of their best people the Germans had suffered in Russia and Normandy.

Many military historians agree that the German army as it existed in the spring of 1918 and in the spring of 1941 was, at the tactical level of war, one of the most superb armies the world has seen. Both world wars lasted as long as they did, both world wars were as painful as they were for the victorious Allies, because German tactical excellence went a long way toward compensating for German strategic folly. The point is that the tactical level of war is the province of junior officers leading small units—and selecting and training junior officers to lead small units in battle is my theme. How did the old German army acquire and develop new lieutenants who were so consistently excellent?

The old German army was recruited and organized on a regional basis. Every town of any size in Germany had its own army regiment that was raised from the young men of that town and the surrounding countryside. Young men aspiring to become army officers first applied to the commanding officer of their local regiment. Those who received passing marks in a rigorous initial winnowing process of exams and interviews became officer candidates.

Only upon successful completion of one year of enlisted service did the officer candidate first set foot in an officer cadet school. There, the officer candidate received an education in all the academic aspects of how to lead soldiers that was analogous to what our West Point and ROTC cadets learn in the classroom today.

Upon successful completion of his academic military instruction, the German officer candidate returned to his home regiment. But he still wasn’t fully an officer. Rather, he served as a junior officer in a trial status under the close scrutiny of his regiment’s officer cadre. This experience was analogous to Cadet Troop Leader Training (CTLT) as experienced by West Point and ROTC cadets today. During times of war, German officer candidates performed their equivalent of CTLT in real combat. If they displayed any weakness or deficiency, they were likely to be dropped from the officer training program.

Only after demonstrating the required levels of proficiency as trial status lieutenants were officer candidates finally accepted into their regiments as fully fledged new lieutenants. The admirable result of this traditional German methodology was that in the old German army, there was no such thing as a “newbie” lieutenant who was wearing the insignia of his rank but was still a walking question mark with regard to his ability to lead soldiers in battle.

Contrast the situation just described for the old German army with the situation in our Army today. New lieutenants who have just graduated from West Point or ROTC and their branch basic courses report to their first units as unknown quantities. The soldiers they will lead and the higher officers whom they will obey are strangers to them. And they are strangers to both the soldiers they are presuming to lead and to the higher-ranking officers who are depending on them to perform. The conditions have been set for another clichéd Hollywood war movie about a newbie lieutenant having his previously undetected shortcomings ruthlessly revealed in combat—and getting a bunch of his soldiers needlessly killed in the process.

Pieces of the traditional German method of selecting and training officer candidates can be modified and grafted onto our American Army of today. It will require a difficult and painful transition period. It will require more fortitude, adaptability and creativity from the Army’s bureaucracy than that bureaucracy will probably want to display. But if the process provides the Army with new lieutenants who are better proven in their competence to lead soldiers into battle before they actually do lead them into battle, it will be worth it. 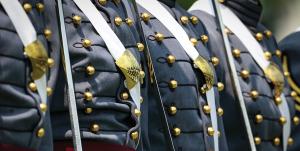 Building Army units so that each unit is raised from the population of a specific geographic locality—like the Germans as well as the British did—would be too unwieldy to implement in our American context. But we can do the following if we summon the will to follow through: Young people continue to apply to West Point and ROTC just as they do now. The big change will be what happens after they are accepted. Before they set foot on either West Point or the ROTC-hosting college campus of their choice, they must complete enlisted soldier basic training and advanced individual training to be awarded an enlisted soldier’s MOS. They must then serve for one year as an enlisted soldier in a line unit. Only upon successful completion of this period of enlisted service will they proceed to West Point or the ROTC-hosting college of their choice.

What this methodology would mean for West Point is that during the first plebe summer of the cadet experience, it will not be necessary to give a mass of pathetically clueless recent high school graduates their first military haircut and their first clumsily learned introduction to how to stand at attention, how to salute, how to march, how to say “yes, sir” and “no, ma’am,” and how to qualify with their individual weapon. The plebes will already be masters of these fundamental skills. Plebe summer could start off immediately at a higher level of training for people who have already proven themselves to be trainable. Similar benefits would be seen at ROTC programs nationwide.

Eventually, under the proposed system, West Point and ROTC cadets will be ready to leave their schools and return to the U.S. Army for their troop-leading experience. To the maximum extent possible, the units in which cadets perform CTLT should be the same units in which they performed their year of enlisted service.

A point to stress here is that the CTLT experience must be a much harsher winnowing exercise than is presently the case. A demonstrated lack of competence or character at CTLT would be grounds for dismissal.

Having mastered the challenges of a severe CTLT period, cadets would return to West Point or their various ROTC programs to complete their schooling. And, on fine days in May, they would walk across the stage, receive their diplomas and commissions, throw their hats into the air, and present a silver dollar to the first enlisted soldier to salute them. Then they would, as usual, proceed to their officer basic courses for their respective branches and to their first units of assignment. To the maximum extent possible, the branch assignments and the first unit assignments of these new lieutenants should be the same as the branches and units in which they served as enlisted soldiers and the same as the branches and units in which they completed CTLT.

The system I propose would likely save the lives of many of our enlisted soldiers and improve our odds of winning future battles and wars. There would be a cost-effectiveness benefit derived from this proposed system as well. The cost to the taxpayer to turn out each West Point graduate is enormous. Ditto for ROTC cadets on scholarships. Given the expense of creating these officers, the percentage of them who typically decide to leave the Army after serving their minimum obligatory term of service is too high. Taxpayers have the right to expect that the officers they pay so much to produce stick around for the longest careers possible. That is simply smart investment strategy.

The system proposed here, with its requirement for a year of enlisted service, would serve to scare off those young people who are not serious about committing themselves to the Army for life. It is true that the young people who are willing to meet the preliminary requirement for a year of enlisted service may have SAT scores that are a few points lower than the SAT scores of typical cadets under the current system. But I would rather have new officers who might have slightly lower SAT scores as long as they display the guts to commit themselves totally to a life in the U.S. Army.