Power to the People

Just months into his appointment as the 40th Army chief of staff, Gen. James McConville, right, has fully embraced people not just as the “top priority” military leaders often espouse, but as a valuable resource to be carefully nurtured.

The 60-year-old master aviator who served as deputy chief of staff for personnel and as vice chief has unveiled “our very first Army People Strategy,” fully embraced the deliberative talent management concept of not treating soldiers as replaceable cogs in the machine but as individuals, and unveiled “quality of service” initiatives aimed at helping soldiers and families.

“We will take care of all of our people,” McConville pledged in his first Dwight D. Eisenhower Luncheon address in October at the Association of the U.S Army Annual Meeting and Exposition, setting a goal of providing “a positive climate where everyone is treated with dignity and respect.”

“People don’t want to be treated like interchangeable parts in an industrial age process,” McConville said. “They want to be recognized for their unique talents; they want purpose, they want belonging, and they want a pathway to success.”

McConville believes this will make a big difference. “When our people are treated this way, we know that they perform better, stay longer, and they will make our Army stronger. So, as we move forward, we will manage our people and their talents more effectively,” he said. 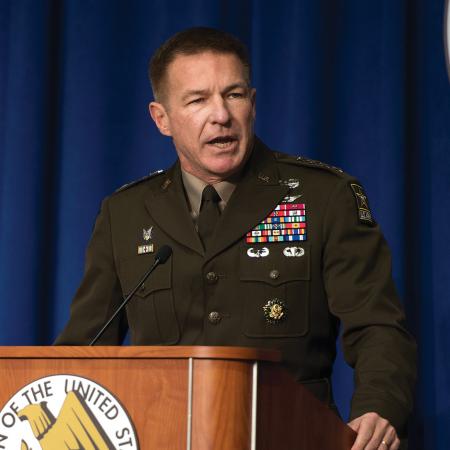 This is no simple task, because taking care of people spans recruiting and hiring, training and education, moving them from place to place, providing benefits including health care, and making certain soldiers are equipped and ready to do their jobs.

The Army People Strategy was unveiled Oct. 15 and signed by McConville, Army Secretary Ryan McCarthy and Sgt. Maj. of the Army Michael Grinston.

Also unveiled Oct. 15 was the quality  of service plan that focuses on housing, health care, child care, spouse employment and permanent change-of-station moves, including the timing of moves and overcoming problems with movers.

At a town hall meeting with military families, McConville thanked those who have been complaining about problems such as poor maintenance in family housing. “You have all helped us by bringing to the attention of the chain of command where there are issues,” he said.

McConville, who said he and his family have moved 22 times in his 38 years of service, said he understands the frustrations of military life and asked: “Give us some feedback.”

“We believe we owe it to you to provide quality of life that is commensurable, really, to quality of service,” McConville said. “The Army is people. That is what makes us the world’s greatest Army, so we have to take care of them.”