The Army has ambitious plans for solidifying and expanding engagement with Asia and Pacific nations, but this effort—like almost every military program—faces a budgetary threat.

Over the next five years, the Army plans to participate in 29 exercises as part of the Pacific Pathways concept of strengthening bonds with other nations, according to Gen. Vincent K. Brooks, U.S. Army Pacific commanding general. Those exercises will be held in 12 countries and involve soldiers from units throughout the U.S. and overseas bases.

What It Is
Most of the exercises will concentrate on humanitarian relief and disaster response, a good way of building teamwork and cooperation, Brooks said. “Each country we go to is permitting U.S. troops to conduct exercises on the sovereign territory of one of our friends, and that’s how these things should be viewed, so it’s creating broad effects in terms of the value we’re getting as an Army and as a joint team,” he said in March at a Washington, D.C., event sponsored by the Center for Strategic and International Studies.

He assured those attending the meeting that the Army’s shift to the Pacific is not cosmetic. “The strategic rebalancing in the U.S. is real,” he said, and it is getting results. Of the 12 countries that will be part of Pacific Pathways exercises over the next five years, five have existing treaties with the U.S. and seven do not.

Army Chief of Staff Gen. Raymond T. Odierno said the Pacific Pathways initiative “is really key for us reaching out to new and important allies.”

“We have very sophisticated and long-term programs when we deal with Korea, Japan, but now we’re able to reach out to other countries that we think are going to be really important to us: Indonesia, Malaysia, Vietnam and other places like that that are really important to us as we continue to develop our relationships and capabilities in the Pacific,” Odierno said March 17 before the House Armed Services Committee. “Pacific Pathways is allowing us to do this.”

The Association of the U.S. Army’s Institute of Land Warfare is hosting a symposium in Honolulu in May focusing on landpower in Asia and the Pacific. Known as LANPAC, the event will be held May 19–21 and will include representatives from about 30 nations taking part in discussions on people, partnerships and products related to informing capabilities in the Indo-Asia-Pacific theater. 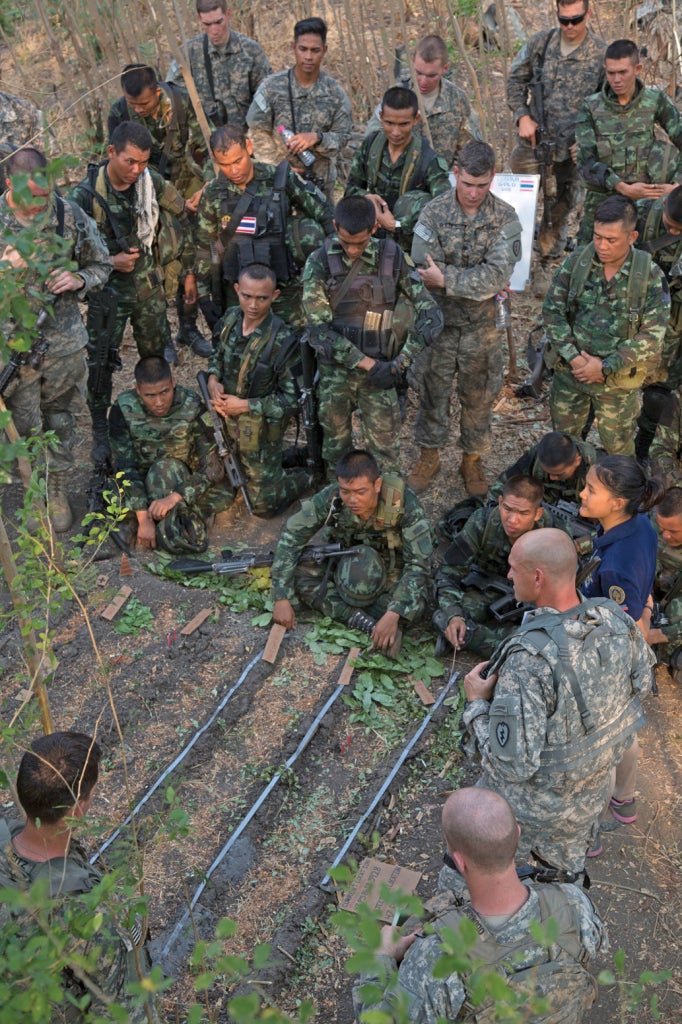 Happening in the Field
There are abundant opportunities for the Army to work with other nations. 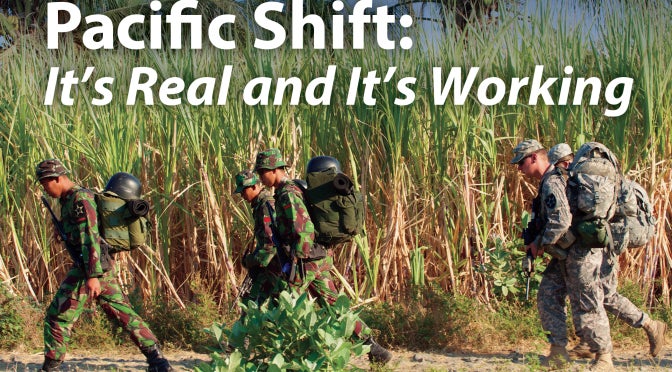 While Angkor Sentinel was underway in Cambodia, the Army also was involved in Exercise Key Resolve, annual training in South Korea that included deployment of the 20th Chemical, Biological, Radiological, Nuclear, Explosives Command from Aberdeen Proving Ground, Md., to the Korean Peninsula. Brig. Gen. JB Burton, the chemical unit’s commander, said the exercise helps strengthen a relationship with the South Korean army’s Chemical, Biological and Radiological Defense Command and is a “great training opportunity” for U.S. and Korean soldiers.

Support on Capitol Hill
Army leaders have lauded the progress in focusing on Asia and the Pacific.

Army Secretary John M. McHugh said the region has been viewed as an air and water domain, “but the Army has had substantial presence in that region for many, many years, and we see an opportunity at this moment to increase that.” He credited Brooks with the Pacific Pathways initiative and views it as being very efficient: “sending out forces to train through a variety of engagements and then return home.” 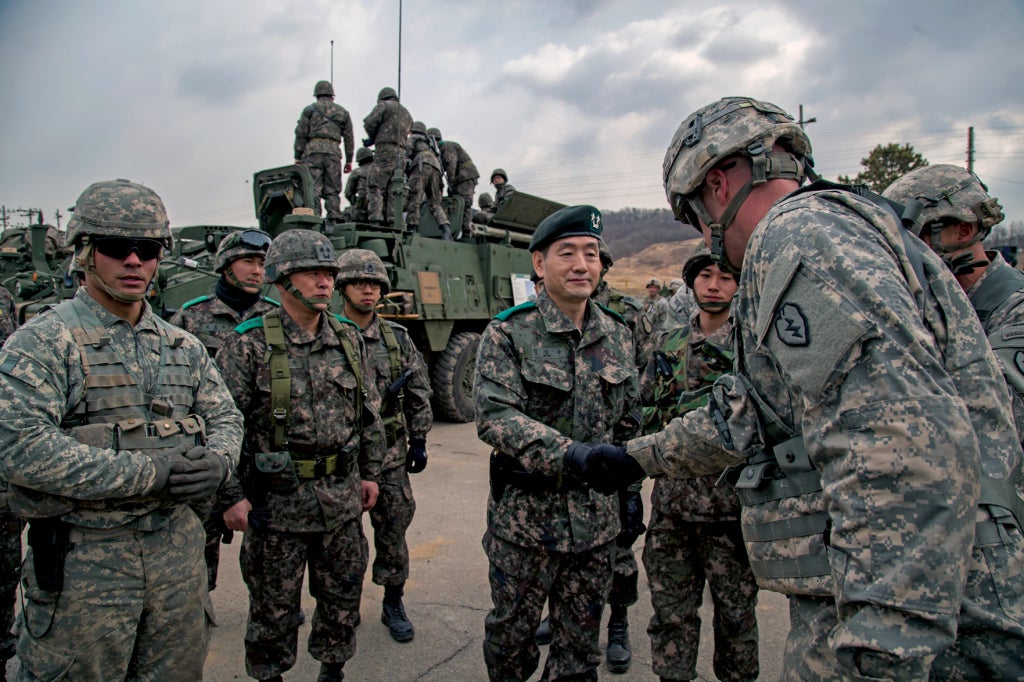 “Eight of the 10 world’s largest armies are located in the Pacific,” McHugh said. “Of the military forces throughout that region, the vast majority are headed up by Army officers, land force officers. So we have a natural affinity to deal with these partners and not to be warlike in our posture toward China but rather to build assurance, to build partnerships, and through Pacific Pathways,” McHugh said.

McHugh warned the Pacific Pathways rotations are subject to funding and that a cut in the Army budget resulting from sequestration would interfere with Brooks’ plans. Odierno was even firmer: “Sequestration will basically end Pacific Pathways for the next couple of years if we do not get that thrown out.” 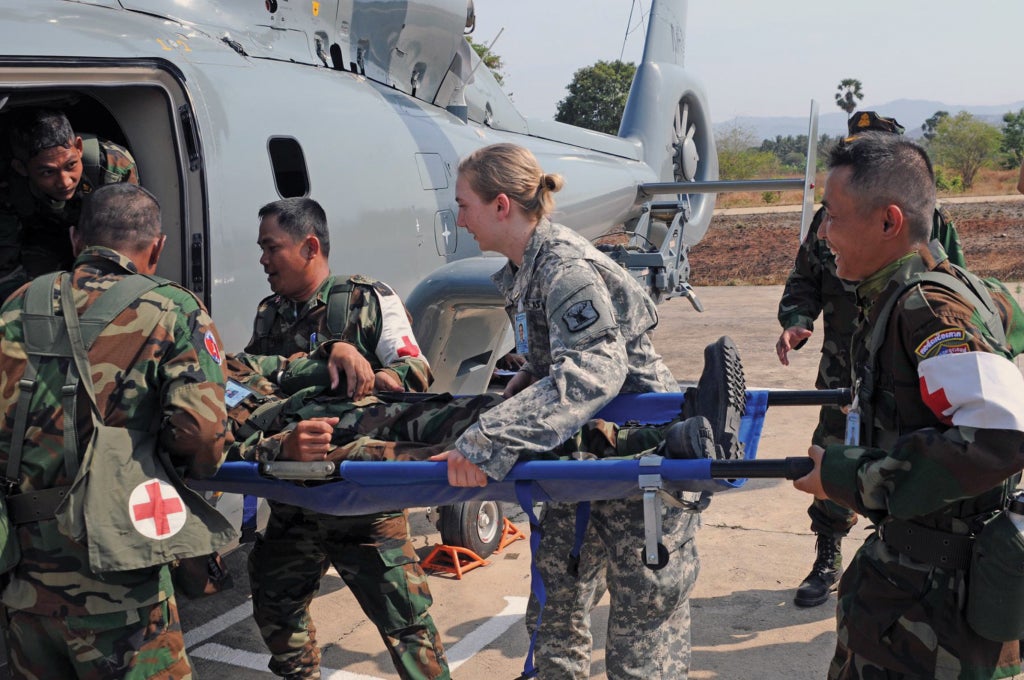 Defense Secretary Ashton Carter said rebalancing to Asia and the Pacific “is central to our strategy. That’s where half of humanity lives. That’s where half of the economy of the world is.” American presence in Asia and the Pacific “has been the central factor that has kept peace and stability and therefore prosperity going in that region,” Carter told the House Armed Services Committee.

Like McHugh, he warned funding—or the lack of it—could interfere with plans. “We are on the ragged edge of being able to satisfy all the ingredients of our strategy, of which the Asia-Pacific rebalance is a central ingredient,” he said. “If we don’t get some budget stability and we keep doing things one year at a time and one piece at a time, we are going to have to reconsider our strategy.” 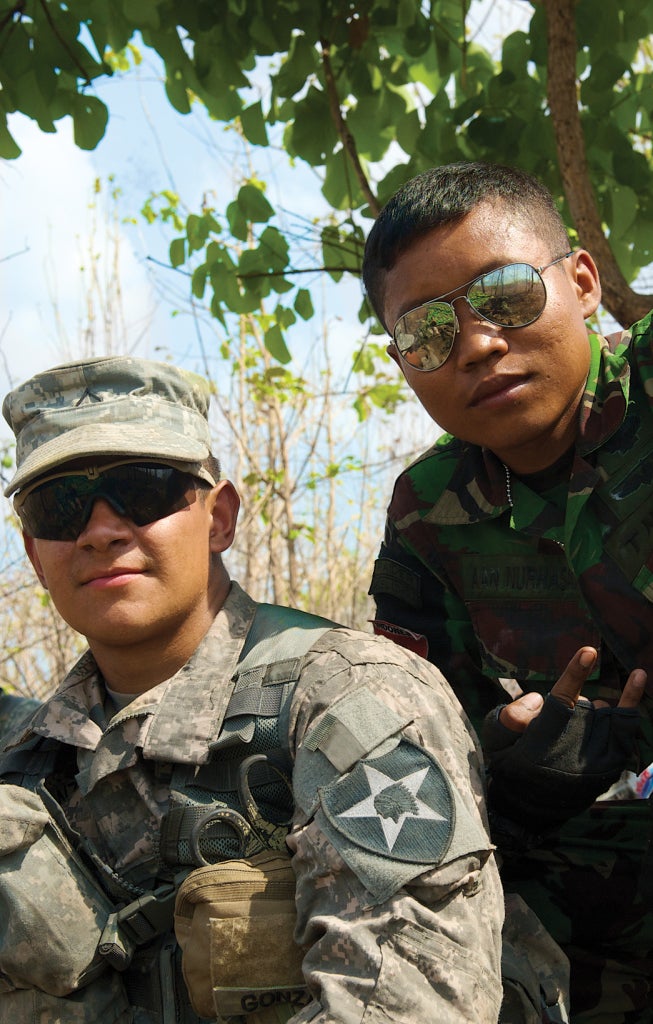 Pvt. Juan Gonzalez, left, of the 2nd Infantry Division and his Indonesian counterpart were among some 1,200 personnel who participated in Garuda Shield 2014. (Credit: U.S. Army/Sgt. Brooks Fletcher)

The five-year defense plan drawn up by the Pentagon is enough to sustain the Asia-Pacific strategy, Carter said, but this might not be possible under sequestration. If the budget is cut, “something will have to give.”

In addition to humanitarian mission and disaster relief, Asia-Pacific nations have been asking for other help, ways to make their militaries more professional, Brooks told the March forum. “It’s different for every single country, and the good news is we have sufficient flexibility and capacity in our military forces, in our joint forces and U.S. Army forces, and that has made a difference,” he said.