A robust alliance network and series of security partnerships have been the cornerstone of stability and prosperity in the Indo-Asian-Pacific region since the conclusion of World War II. However, since that time, many key economic and security issues have changed in this theater. This has created a new dynamic that must be addressed by those wishing to maintain the international order that has provided so much to the region. Indeed, we are at a crossroads with institutional and operational challenges facing the Army as well as the joint force, together with our multinational allies and partners.

According to many assessments, including by the Army chief of staff’s Strategic Studies Group, the character of war continues to change quickly, requiring us to reassess core beliefs. We must now test and refine our doctrine, capabilities and people to ensure our forces are ready for conflict today while also preparing our men and women for the combat of tomorrow.

Inevitably, conflict today and tomorrow will be more complex and distributed, involving actions across multiple domains—land, air, sea, space and cyber—by multiple military services and of many nations, at times simultaneously. While still in development and experimentation, nascent concepts for military employment such as Multi-Domain Battle are affecting operational and resource decisions, especially here in the Indo-Asian-Pacific. Given the operational environment in this region, where the international state of play is more tenuous than ever, a better mode of joint and multinational integration is sorely needed.

The region covers 36 countries in 16 time zones, contains over half the world’s population—including 24 of the world’s 36 megacities—and covers more than half the world’s surface area. We share the area with three of the largest economies, six of the 10 largest militaries and five of the United States’ seven mutual defense agreements.

According to the commander of U.S. Pacific Command, approximately $5.3 trillion in annual global trade relies on unimpeded access to sea lanes like those in the Strait of Malacca and the South China Sea, with $1.2 trillion of this sea-based trade destined to or exported from the U.S. Additionally, the Strait of Malacca alone sees more than 25 percent of global oil shipments and 50 percent of natural gas transits each day.

The Indo-Asian-Pacific region is also the most disaster-prone in the world with typhoons, earthquakes, volcanoes and tsunamis responsible for approximately 60 percent of the world’s disaster fatalities, according to a RAND Corp. study. In short, our global prosperity hinges on the stability and security of this vast and complex region.

These demographic and economic dynamics are exacerbated by the increased rate of technological change that adds to the political and military complexity found in the Indo-Asian-Pacific. Dramatic technological shifts created by unmanned capabilities, robotic learning and artificial intelligence, nanotech, biotech and big data are only expanding military competition among geopolitical rivals. Much of these new technological tools depend on the use of digital connectivity—with Peter Singer of the New America Foundation citing 7 billion things being connected to the internet in 2016 and a projected 50 billion by 2020—only increasing the already dangerous situation in cyberspace and its use of space assets for connectivity.

Technological shifts also are feeding and expanding security challenges in the region, which includes some of the world’s most intractable: an increasingly belligerent North Korea sharing its missile technology with Iran; a growing China that challenges international rules and norms; revanchist Russia, which is active in the Pacific with a provocative military posture; a continuing nuclear-backed friction between India and Pakistan; growing activities by violent extremist networks in partner and ally nations; and political and diplomatic instability from changes in executive leadership of key regional allies and partners. Sophisticated denial capabilities and less-than-military forces managed by the state, and backed by large militaries with interior lines of communication, create the danger of faits accompli.

Cargo is loaded onto a logistic support vessel in Hawaii in preparation for an exercise in Japan.
(Credit: U.S. Army/Staff Sgt. John C. Garver)

Like the international state of play, the military situation is also increasingly dangerous, with the character of warfare itself continuing to change dramatically. Our adversaries have learned from our successes and failures over the past few decades. They recognize that our strengths found through power projection, joint and multinational operations, and technological overmatch led to unprecedented tactical success. As such, they have developed capabilities and concepts that attempt to remove those advantages, increasing the complexity of the battlefield for our joint and multinational forces. This has led to an increasingly contested global commons, with a loss of our military dominance in the air and sea due to these denial technologies and tactics.

These strategic trends require that we better position ourselves and our partners to maintain our military advantages and recapture those that have been lost. Reducing the risk of conflict and ensuring the stability of the current international system is dependent on our ability to deter key actors from aggressive and detrimental actions. To do this, we must present potential adversaries with multiple dilemmas that would deter further aggressive behavior. If aggression leads to conflict, however, we must be prepared to provide multiple options to our national leadership to defeat our adversaries.

Operating as a joint or multinational force may not sound terribly different than operations of the past. From a land perspective, however, exactly how we will operate on the 21st-century battlefield must change. We can no longer leave the air and sea to other services. Nor can they simply focus on “their” domains. We all must better integrate our intelligence, planning, operations, command and control, and effects across all domains and among all partner nations.

More than anything, this will require a new approach and a new mindset. We must change our distinct service and national military cultures to one of inclusion and openness. We must further integrate a mentality of Mission Command, whereby every person is empowered to gain the initiative based on their role and function. And we must focus on the development of our leaders to not only be comfortable, but also to thrive in this environment of ambiguity and chaos. Any single domain advantage, or dominance, is over. Therefore, we must employ our remaining real advantages through our ability to reach true joint integration, and our people. With this mindset change in place, new concepts such as Multi-Domain Battle will affect three key areas: organizations/processes, technology and people.

Changes in organizations and processes are designed to provide different and better-focused tools to joint and multinational forces to overcome the loss of parity in multiple domains, particularly in the air, at sea and within cyberspace. We can no longer focus exclusively on the land domain. We must provide our sister services and partner nations effects in all domains to tackle their operational and strategic challenges as well—and vice versa. This means change must focus on a greater ability to have cross-domain effects and more seamless and effective integration across the joint and multinational forces.

Another key area is technological change and integration across services and nations. Instead of losing our overmatch capabilities through slow acquisition programs, we must overcome and leverage the velocity of technological change. We need to leverage momentum created by organizations such as DoD’s Strategic Capabilities Office at the Office of the Secretary of Defense to drive similar opportunities across national boundaries, providing solutions to allies and partner nations based on their operational needs and economic capabilities.

U.S. Army Pacific is tied tightly into efforts at the Strategic Capabilities Office. Including any and every piece of equipment and new concept into our exercises and experimentation, we need to ensure, where possible, that we also include the other services and our allies and partners. As has been the case in this theater for years, we are leveraging our great “battle lab” culture. In the end, we must view technology as a key tool to support decision-making, lethality and protection, and we must leverage technology that can empower our men and women to increase their lethality and effectiveness. 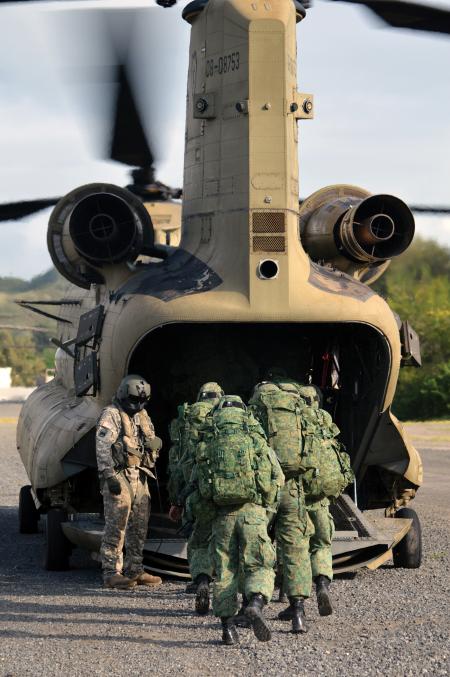 The final area we must address to increase joint and multinational integration is our people. We must support and empower our people to overcome the current battlefield geometry challenges of being outnumbered, outdistanced and outlearned by our potential adversaries. We can do this by developing agile and adaptive leaders among the nations friendly to U.S. interests, helping increase their ability to work seamlessly while thriving in ambiguity and chaos. The Army has done significant work on this as part of the U.S. Army Training and Doctrine Command’s efforts in the human dimension. Such ideas should be implemented at the operational level as well as incorporated across the joint force and supported in security cooperation activities with allied and partner nations.

At present, these are notional ideas for increasing our ability to integrate across our joint and multinational forces in the Pacific. What is clear is that no matter the geography or adversary, our Army, joint and multinational forces must be well-led, well-trained and well-equipped to operate in and across multiple domains on the 21st-century battlefield. One way to ensure this is through holistic operational testing, with our Army Service Component Command hand in hand with our sister services and allies and partners.

Today in the Pacific, this is occurring. We are getting at the joint integration, technology and people through rigorous inclusion of concepts and capabilities in our exercises as well as through integration into our intelligence, planning, equipping and leader-development efforts.

We cannot wait to resource and test this effort. The concepts and capabilities found in concepts such as Multi-Domain Battle are not just required for a future conflict, but for any near-term conflict that requires us to be ready to “fight tonight.” Make no mistake: Incorporating and testing these items will increase our readiness today as well as prepare our men and women to win future wars.