Entering a pivotal year in the Army’s energetic transformation effort, Army Chief of Staff Gen. James McConville is balancing the needs of a force that is very busy today with an urgent push to prepare for a future, more lethal battlefield.

This fall, the Army will unveil its new Multi-Domain Operations doctrine, and over the next 12 months, it plans to field or produce prototypes for 24 of its signature modernization programs. Together, these milestones could usher in significant changes to the way the Army trains and fights.

At the same time, the Army remains in high demand, with soldiers responding to the crisis in Europe, deploying to Iraq and Syria, conducting exercises and partner-building activities in the Indo-Pacific and Africa, deterring conflict in the Middle East and supporting disaster-relief and COVID-19 efforts at home.

It also is facing a serious recruiting challenge. The number of eligible and interested service-aged youth continues to shrink, and the Army sees increased competition from private-sector companies. 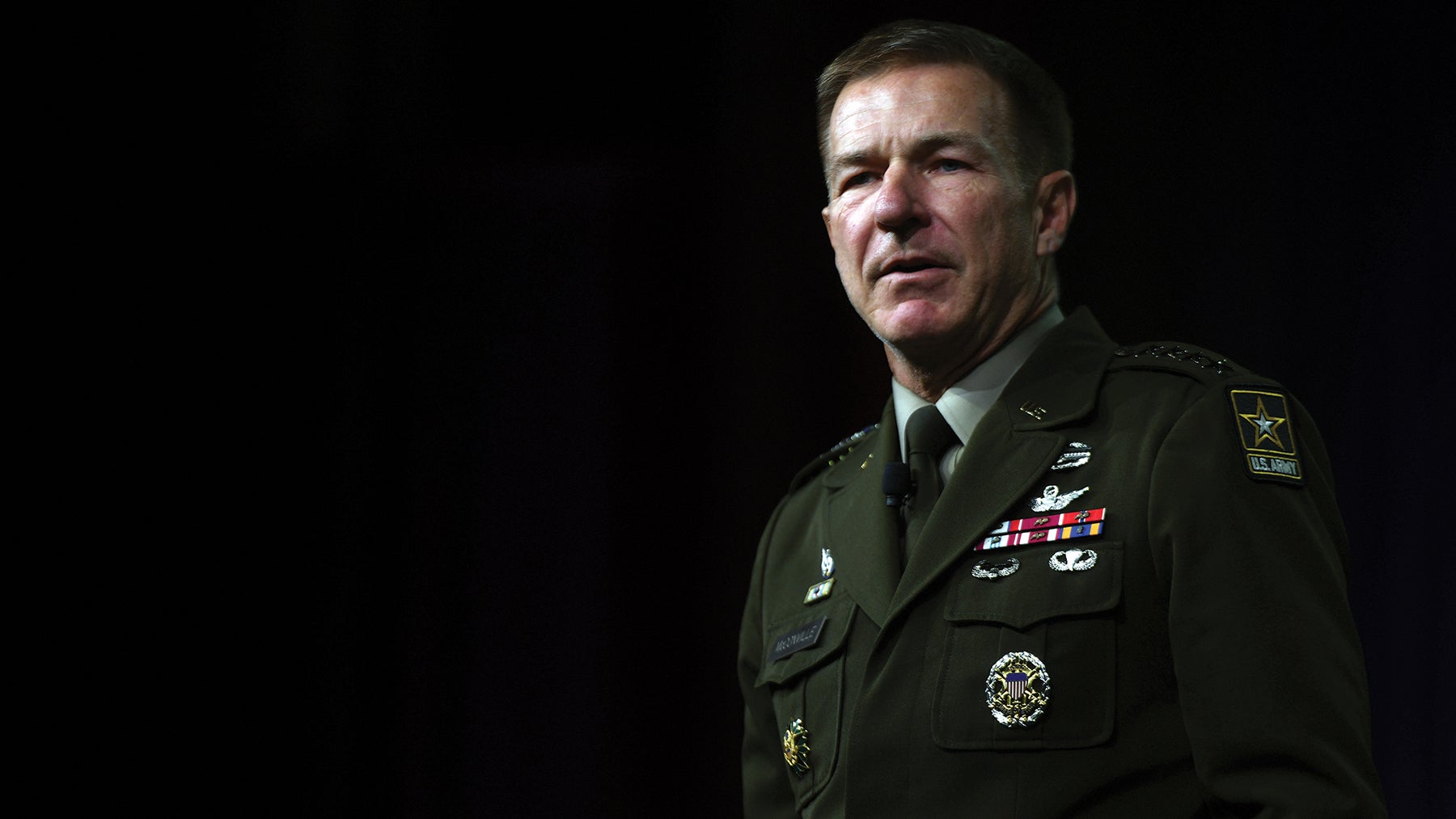 For McConville, maintaining this delicate balance comes down to taking care of people and investing in them. “We’re in a war for talent right now, so I would say people are more important than ever,” McConville said. “And when I talk about people, I don’t talk about ‘Soldiers First.’ I talk about ‘People First,’ because they are what makes our Army the greatest army in the world.”

This effort includes soldiers from all three components, their families, Army civilians, veterans and retirees, McConville said. His focus on people and their importance has not wavered since he became the Army chief of staff in August 2019. People drive the Army, McConville said. “You can’t execute strategy, you can’t execute plans, unless you have great squads, platoons and companies, because they’re the ones who actually do it,” he said in July.

People also are critical to the Army’s modernization plans. “You can have the world’s best warfighting capabilities, but they’re not worth much if you don’t invest in the actual warfighters,” McConville said then.

Faced with a recruiting shortfall, the Army is looking for new ways to reach America’s youth.

More than 80% of young people who join the Army today come from a military family or have a relative who served, McConville said. About 44% of them attended high schools with Junior ROTC programs.

“We’re learning [that] exposure to the military is extremely important” when talking about getting young people interested in military service, McConville said. “So, we’ve got to work hard to expose young men and women to the military, and we’re aggressively getting after that.”

One such initiative is the Future Soldier Preparatory Course, which was launched in August at Fort Jackson, South Carolina. “The intent of that program is to help young men and women meet the academic and physical standards of the United States Army within 90 days,”

McConville also has asked veterans and retirees for their help with the Army’s recruiting challenges. “I’ve asked them to help us inspire young men and women to serve, and they’re doing that for us, and it’s making a difference,” he said.

As the Army works to fill its ranks, those already serving remain busy and in high demand. But the Army’s years of hard work, planning and investment in rebuilding readiness across the force have paid off, McConville said

The Army’s tactical readiness—its ability to deploy soldiers and units that are ready to fight and win—is high, and it was on full display earlier this year when tens of thousands of troops were rapidly deployed to bolster America’s NATO allies in Eastern Europe, McConville said.

“We’ve seen that with the 82nd Airborne Division and many of these divisions that we’ve put around the world,” he said. “They’re highly trained, they’re disciplined and fit. They’re ready to fight.”

The service’s strategic readiness also is in good shape, McConville said, using as an example the deployment of the 1st Armored Brigade Combat Team, 3rd Infantry Division, to Europe from Fort Stewart, Georgia, earlier this year.

“They were able to get on a range in seven days as an armored brigade combat team mainly because we had pre-positioned equipment over there.”

He added, “Not only was it pre-positioned, it was ready to go, and the supporters that were over there were able to move it to [Grafenwoehr Training Area, Germany,] and have it all ready to go. We can never forget the importance of logisticians when it comes to making sure that we’re ready to conduct combat operations.”

To maintain those high levels of readiness, McConville said, the Army is using its Regionally Aligned Readiness and Modernization Model, a new force generation model designed to give soldiers and units predictable, dedicated periods for missions, training and modernization.

“When it comes to readiness, we’re not going to send any soldiers into a combat situation where they’re not trained and ready to go,” McConville said, adding that Army leaders are paying close attention to make sure soldiers also get much-needed dwell time.

McConville said he is concerned about the operations tempo placed on units such as the 82nd Airborne Division and Patriot air defense missile units, which are in “the highest demand.”

This includes families. “Our families are absolutely critical,” McConville said. “We enlist soldiers, but we retain families, and our retention is pretty good, but we should never take that for granted.”

The Army could not successfully carry out its missions without family support, McConville said. That’s why Army leaders continue to work on improving quality-of-life programs for Army families, whether it’s housing, health care, child care, spouse employment opportunities or smooth permanent change-of-station moves, he said. Gains are being made in all those areas, McConville said, but they are efforts that require long-term, continual attention.

On modernization, the Army continues to be “very aggressive,” McConville said.

Many of the programs are “coming in at a very good pace, and we’re very pleased,” McConville said.

“To me, the proof is in the execution,” he said. “Success, to me, … is these systems are in the hands of soldiers on the battlefield, giving them a decisive advantage against their opponents.”

Just as Army leaders in the 1970s used lessons from the Arab-Israeli wars to develop AirLand Battle doctrine, McConville said, today’s Army is learning from the war in Ukraine as it finalizes its Multi-Domain Operations doctrine, scheduled for release in October.

The war has “given us insight, but it’s also given us insight into our modernization priorities and the concepts that we’re going to have,” McConville said.

“What we’re seeing is the importance of speed, range and convergence,” he said. “The speed and range of weapons systems matter.”

Some have called the High Mobility Artillery Rocket System, known as HIMARS, a game changer for Ukraine as it battles Russian forces, McConville said.

With its range of 70–90 kilometers, some are “describing that as long-range precision fires,” he said. But compare that to the Precision Strike Missile the Army is developing, which is going to be “500 kilometers that rides on the back of HIMARS,” and “you start to see the importance of having speed and range, and what it can do on a battlefield changes the whole framework of how we will fight in the future.”

“You have to have sensors that can find the targets throughout the battlefield, and then quickly move that data through an integrated command system to the appropriate lethal systems to allow you to conduct those types of combat operations,” McConville said.

To put it all together, the Army is modifying its combat training centers so they’re ready to train soldiers on multidomain operations, “where they are contested in every single domain,” McConville said.

Large-scale combat operations against a near-peer adversary are “a very different operation” than the counterinsurgency and counterterrorism operations the Army conducted over the past 20 years in Iraq and Afghanistan, he said.

“Our commanders have to learn to operate in this environment,” McConville said.

McConville said he is “extremely proud” of the force and all it has accomplished.

“This has been a rough couple of years,” he said. “This Army, and this military, has faced adversity around the world. It’s done everything it’s been asked to do and, quite frankly, I think they’ve done everything we’ve asked them to do extremely well. I’m very proud of them, proud to be the chief of staff of this Army.”