Land power is the key to American military strategy. We must integrate other domains as well—precision missile strikes, cyberwarfare and freedom of navigation operations are all essential to modern warfighting—but as long as people live on the land, it will be necessary to seize and secure territory. 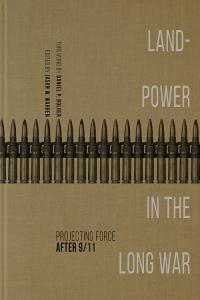 But land power strategy is at a crossroads. Nearly two decades of fighting in Iraq and Afghanistan have seen tactical and operational successes, but strategic results have been less positive. How we will fight future counter-insurgencies and regional conflicts is uncertain given the current shift in focus to near-peer competitors (specifically China and Russia).

Add to the mix subjects like robotics, artificial intelligence and directed energy weapons (or lasers), and it is clear that we need to stop and figure out the best way ahead.

Fortunately, we have Landpower in the Long War: Projecting Force After 9/11 to help with that task. This new entry in the AUSA Book Program is a comprehensive analysis of American strategic land power.

We spoke with editor Lt. Col. Jason W. Warren to get some insights into its findings.

AUSA: What inspired you to focus on this topic?

Warren: Some fellow field grade officers and I (and some civilian academics) were frustrated to watch the Army actively suppress measures, such as the Iraq report, meant to understand the wars post-9/11. This was done to protect the reputations of senior officers, many of whom had already retired, as well as politicians.

This sent the message that the lives of the officers and soldiers lost in com-bat, or whom could be potentially lost in future wars, were less important than Beltway politics.

Warren: We advertised an academic conference hosted by the Army War College and then selected the best pa-per abstracts we received and formed those into panels around particular themes.

We then selected the best papers from the conference to form the basis of the book.

Where we lacked coverage in the consideration of land power as a whole, I invited specialists from other fields to fill the gaps.

AUSA: Which discoveries in the book did you find most striking?

Warren: Just how large and di-verse the topic of land power really is. We approached the project with some humility based on this discovery, knowing the volume wouldn’t be the last word, but simply the first.

AUSA: What have been the most effective changes for the Army since 9/11?

Warren: Ironically, what the Army institution hasn’t learned from its own changes—that a brigade-based model, or perhaps even lower, is the correct formulation for modern combat.

Instead, senior leaders are tripping over themselves to reassert the failed division-based model of the ’80s and ’90s that can only work in the Fulda Gap Cold War scenario.

Our Western allies have rightly moved in the opposite direction, task organizing at the battalion level, which is more appropriate for high-tech, well-trained modern armies.

AUSA: What is the best way for the Army to expand its role as it develops the concept of Multi-Domain Operations?

Warren: First, we have to under-stand Army military and institutional history as a baseline for future changes.

There are two ways to prepare for the future: using modeling, which often results in capabilities-based changes, or using history, which is based on near-term threats.

The latter has always proven more effective, but because military historians are not accepted in academia or Beltway think tanks, more often than not the wrong capabilities are produced in interwar time periods.

Clear examples of this are the downplaying of armor between world wars, the Pentomic army, and the 1990s-based RMA [revolution in military affairs] army that wasn’t prepared for Bosnia, Kosovo or Iraq after 2003.

The best way to prepare for multidomain operations is to invest in professional military education and understanding the past to inform the present.

To order a copy of Landpower in the Long War, please visit us online at www.ausa.org/books.