Military science has a well-known dictum that the nature of warfare is constant but the character of war—the ways and means in which it is fought--is always changing. This is a central theme of Vom Kriege (“On War”), the famous work by the 19th-century Prussian general and military theorist Carl von Clausewitz.

Clausewitz wrote in a time where armies moved at the speed of pack animals firearms had an effective range of a few dozen yards. So even he might be surprised at how much the character of warfare has changed in the modern era. 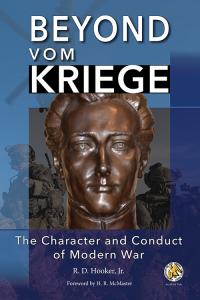 Beyond Vom Kriege: The Character and Conduct of Modern War, the latest addition to the AUSA Book Program, examines the changing face of contemporary warfare, military theory, and national security.

Author R.D. Hooker, Jr., brings first-hand experience to the subject, having taught at West Point and the National Defense University as well as serving 30 years in the U.S. Army.

The AUSA Book Program sat down with Dr. Hooker to discuss the new book:

AUSA: The essays in Beyond Vom Kriege are informed by your extensive experience both as an Army infantry officer and as a national security professional. Which moments from your Army career had the biggest impact on your thinking about strategy?

Hooker: As a captain I completed a doctoral program in international relations at the University of Virginia, followed by a year as a White House Fellow with the National Security Council. Those experiences, plus three years teaching in the Social Sciences Department at the United States Military Academy, provided the foundation and impetus for my study and practice of strategy.

AUSA: The title of the book references Carl von Clausewitz’s classic treatise on war. What would the Prussian strategist find most surprising about 21st-century warfare?

Hooker: I think Clausewitz might be surprised at how relevant and applicable much of his thinking remains today! But I am also sure that, despite his awareness of science, the lethality of modern technology, and above all nuclear weapons, would amaze him.

AUSA: What role does idealism play in American strategy?

Hooker: Idealism is important and is usually cited as justification for most if not all of our military interventions. But in my humble opinion we tend to fight for our interests, real or perceived, most of the time.

AUSA: What lessons learned from post-Cold War conflicts will best prepare the Army to switch focus from counterterrorism to near-peer competition?

Hooker: I believe we made a mistake in orienting the Army so strongly on counterterrorism and counterinsurgency after 9/11. We took down our armor and artillery communities and eliminated Short Range Air Defense altogether. Battalion and even brigade commanders never really learned how to conduct high-intensity, major theater war. For me, the key lesson is that we must never lose sight of he most dangerous threat, even as we must contend with the lesser ones. Al-Qaeda and ISIS never posed existential threats. China and Russia do.

To order a copy of Beyond Vom Kriege, please visit www.ausa.org/books