After World War I, the Army faced a spectrum of daunting challenges. Returning and demobilizing nearly 3 million troops, incorporating the “G” general staff system the American Expeditionary Forces had found so efficient and effective in combat, addressing how tanks and air power might be used in future conflict, establishing a military police corps and modernizing the signal corps with new radio-enabled communication were just a few things that took significant intellectual energy.

But the decisions and actions associated with how to properly handle U.S. war dead temporarily interred on foreign soil were particularly vexing issues.

In past conflicts, including the Spanish-American War  of 1898, the Mexican-American War of 1846–48  and the Philippine-American War of 1899–1902, families expected their loved ones’ bodies would be returned to the U.S. after the war for burial in private or military cemeteries. But the size and scope of World War I were different. Over 116,000 Americans made the ultimate sacrifice while serving on the European Continent.

During the war, casualties were temporarily interred at sites near the battles where they were killed. After the armistice on Nov. 11, 1918, the War Department struggled with the question of how best to return soldiers’ remains, and also what to do with sites considered hallowed ground.

The U.S. Army Quartermaster Corps calculated the physical, logistical and financial requirements associated with the return of remains, and it was daunting. In addition to practical considerations, there were idealistic souls (some who testified in often-heated congressional testimony on the topic) who thought leaving some Americans in foreign graves would create a symbolic gesture of unity to freedom and a European alliance. The American Field of Honor Organization stated that “the ‘sacred dust’ of American soldiers had made the soil of cemeteries in France forever American, a place where the Stars and Stripes would always fly.”

After much national debate, Secretary of War Newton Baker in 1919 provided Gold Star families with two options: They could either bring their loved ones home for burial in family plots or national cemeteries, or leave their next of kin near the European locations where they had fallen.

Approximately 60% of families asked the government to return their loved ones to the U.S., while about 40% chose to allow their kin to remain in their foreign resting place. 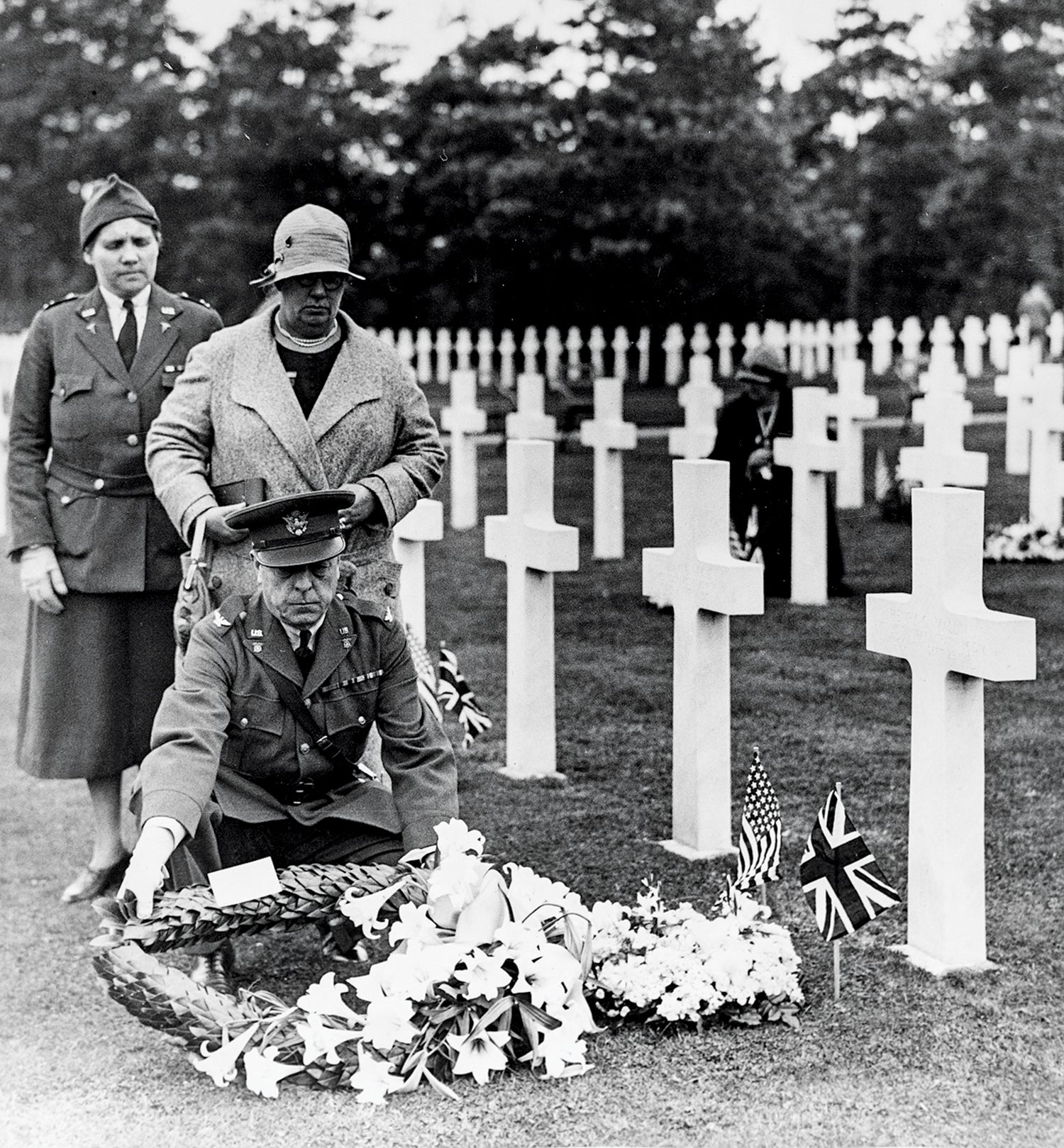 After the War Department issued the directive on interment options, another debate to address battlefield markers and monuments began. Many American units waiting in Europe to demobilize and return home had time to reflect on their actions during the war. They wanted to memorialize their actions, and many began erecting monuments of various designs.

Since many of these units represented specific U.S. states, they often received help from local politicians to fund these monuments. Soon, these shrines to units and their accomplishments began appearing across the European countryside, much to the dismay of the governments upon whose soil these markers had been placed, one not coordinated with another.

To address these actions, the War Department and the U.S. Commission of Fine Arts in 1921 established the Battle Monuments Board to oversee the design, construction and coordination with foreign governments for emplacement of memorials.

The new chief of staff of the Army, Gen. John Pershing—who, as the former commander of the American Expeditionary Forces, was familiar with and had a great interest in recording and honoring the campaigns in Europe—suggested to Congress the establishment of a small commission whose mission would be to determine design and placement standards for battlefield monuments.

In 1922, the Battle Monuments Board recommended to Congress the creation of the American Battle Monuments Commission. The commission would be responsible for not just the creation of stately monuments attesting to the execution of battlefield campaigns, but also for establishing the standard of care for cemeteries that would remain on the Continent.

The original commission consisted of a senator, a congressman, representatives from three veteran service organizations, a Gold Star mother, an active-duty Army officer as secretary and Pershing. While coordinating the original 13 memorials to be constructed was the primary reason for the ABMC’s establishment, Pershing’s attention soon turned to the eight cemeteries that would be the final resting place for those service members remaining in Europe.

Over the next 25 years, until his retirement as chairman of the ABMC in 1948, this would be Pershing’s primary focus.

Which brings us to the present. This year, the ABMC will commemorate its 100th anniversary while looking forward to its next century of service. Today, with about 450 U.S. and foreign employees and 11 presidentially appointed commissioners, the ABMC operates and maintains 26 permanent American burial grounds and 32 separate memorials, monuments and markers in 17 countries on five continents.

The commission preserves with meticulous care the final resting place of nearly 125,000 U.S. war dead at these sites.

On Walls of the Missing at all ABMC sites across the globe, the commission remembers—by name—more than 94,000 Americans who are listed as missing in action or who were lost or buried at sea during the world wars and the Korea and Vietnam conflicts.

Like Department of Veterans Affairs cemeteries in the U.S., overseas cemeteries and memorials maintained by the ABMC are filled with stories of bravery, valor, friendship, family and sacrifice. The commission’s sites also are places of grand beauty, horticultural magnificence and architectural splendor. The grounds are meticulously maintained, the monuments are inspirational, and the history represented in the interpretive centers and museums is fascinating. They are proof that the U.S. does not execute wars of occupation, as the only ground we ask for is that space where we bury our dead.

The most-visited ABMC sites are the Normandy American Cemetery at Colleville-sur-Mer and the co-located Pointe du Hoc Ranger Monument in France, which host nearly 3 million guests each year.

But some of the lesser-known of the 26 cemetery sites—including Netherlands American Cemetery near Margraten (where the graves of over 8,000 Americans are adopted and cared for by Dutch citizens), Cambridge American Cemetery (on a quiet hillside outside of the ancient university city in England), the North Africa American Cemetery (outside of Carthage, Tunisia) or Clark Veterans Cemetery in the Philippines (which was recently renovated after being partially buried in volcanic ash from the June 1991 eruption of Mount Pinatubo)—are all places of beauty, reflection and marvel.

In January 2017, the ABMC acquired its newest site. The French government transferred the Lafayette Escadrille Memorial Cemetery near Paris to the United States. At this memorial, the remains of 49 of the first World War I Americans to fly combat missions are entombed in crypts, along with two of their French commanding officers.

The monument above the sarcophagus honors the 200-plus American volunteer pilots, including the first African American combat ace, Eugene Bullard, who flew 20 missions with French squadrons and brought down two enemy aircraft, for their contributions during the early days of combat aviation.

When the ABMC was established following World War I and expanded after World War II, American visitors did not need historical context. The wives and mothers who visited ABMC cemeteries were not there to learn; they were there to grieve. Foreign nationals who visited the cemeteries and cared for the graves were there to give thanks for the sacrifices associated with their recent liberation.

This is no longer the case. During this year’s 100th anniversary celebration, the ABMC is transitioning from a grieving mission to one centered on education and remembrance. The commission is accomplishing this mission through new visitor centers at several cemeteries, an education program in the U.S. and multiple commemorations of historical events. All these programs will be on display during ABMC’s centennial anniversary.

If you are an American dreaming of an overseas trip, mapping out travels to foreign countries, expanding your study of history or planning a unit battlefield staff ride, consider including a stop at an ABMC cemetery or monument. In doing so, you will help ABMC staff as we contribute to keeping the stories of fallen soldiers alive, carrying on the words of Pershing when he said, “Time will not dim the glory of their deeds.”

Lt. Gen. Mark Hertling, U.S. Army retired, is chairman of the American Battle Monuments Commission. He served in the Army over 37 years and was the commander of U.S. Army Europe at the time of his retirement in 2012.