A technology involving data transactions will fundamentally change how the U.S. military operates. It is a confusing concept, but one that should be embraced as it offers tremendous potential, specifically in logistics. It’s called blockchain technology, and it will change the way business is done across every industry—including supply chain management, agriculture, banking, transportation, education, cyber and more.

It will not only change industries, it will disrupt them. Just as businesses like Uber and Amazon disrupted markets, blockchain will disrupt markets yet again.

Imagine a military system with no single point of failure. Better yet, imagine a system so dispersed that an attack on one point would not disrupt any other point in the system. Or a system where a point of failure can be traced to the specific point of vulnerability. The technology for this system exists.

Blockchain might just be one of the most important, yet most confusing, concepts discussed today. Most people will start trying to define it as a digital ledger or a decentralized system, or confuse it with the digital currency bitcoin.

Life can be traced to a beginning and the fundamental code for all life is DNA. It’s DNA that contains the biological instructions to make a unique species, such as Homo sapiens. It is made of building blocks called nucleotides, which are made of parts forming a strand of DNA. The nucleotides are linked into chains. During DNA replication, DNA unwinds and is copied. The instructions that survive spread and little by little, instructions change and evolve over time. DNA is like that of replicated data storage that can be traced to a beginning.

Now, substitute blockchain for DNA. Maryanne Murray provides an excellent explanation of blockchain in her column Blockchain Explained: A Reuters Visual Guide. She explains that blockchain is a database of records bundled together as blocks added to a chain. In blockchain, nodes (i.e. computers) spread across the internet where information changes over time through transactions (think DNA replication). Murray informs us that new blocks are added once they pass a test called a proof of work, enabling consensus to be achieved to validate the new block. Just as in DNA, failed mutations do not reproduce, but successful mutations spread across the population.

In blockchain, rogue nodes are not accepted and do not spread. Furthermore, each transaction is tracked and can be traced to a single point, preventing data manipulation.

You might be wondering how the military can apply blockchain technology. If you think about it, nearly everything done in the military can be changed by this technology. Take cyber, for example. Blockchain is built on a decentralized network. If there is no central control, there is no central point of failure. This creates a system that is protected against cyberattack and fraud. Think of the massive hack at the Office of Personnel Management (OPM) in 2015 that compromised the personal information of millions of federal employees. This is because all information is stored on a central point, or authority, so all a hacker has to do is attack that one point to access a million other points.

In blockchain, every piece of information is recorded on a block across multiple copies distributed over multiple nodes. Each block is linked to the previous block via a unique code called a hash. No central authority exists to control it; therefore, there is no central point for a hacker to attack. Imagine a million individual data points as one-dollar bills. If each point was controlled by one central point (think OPM) then all a hacker would need to do is attack the central point to access a million dollar bills. If OPM had used blockchain technology, a hacker would have had to attack one point at a time. 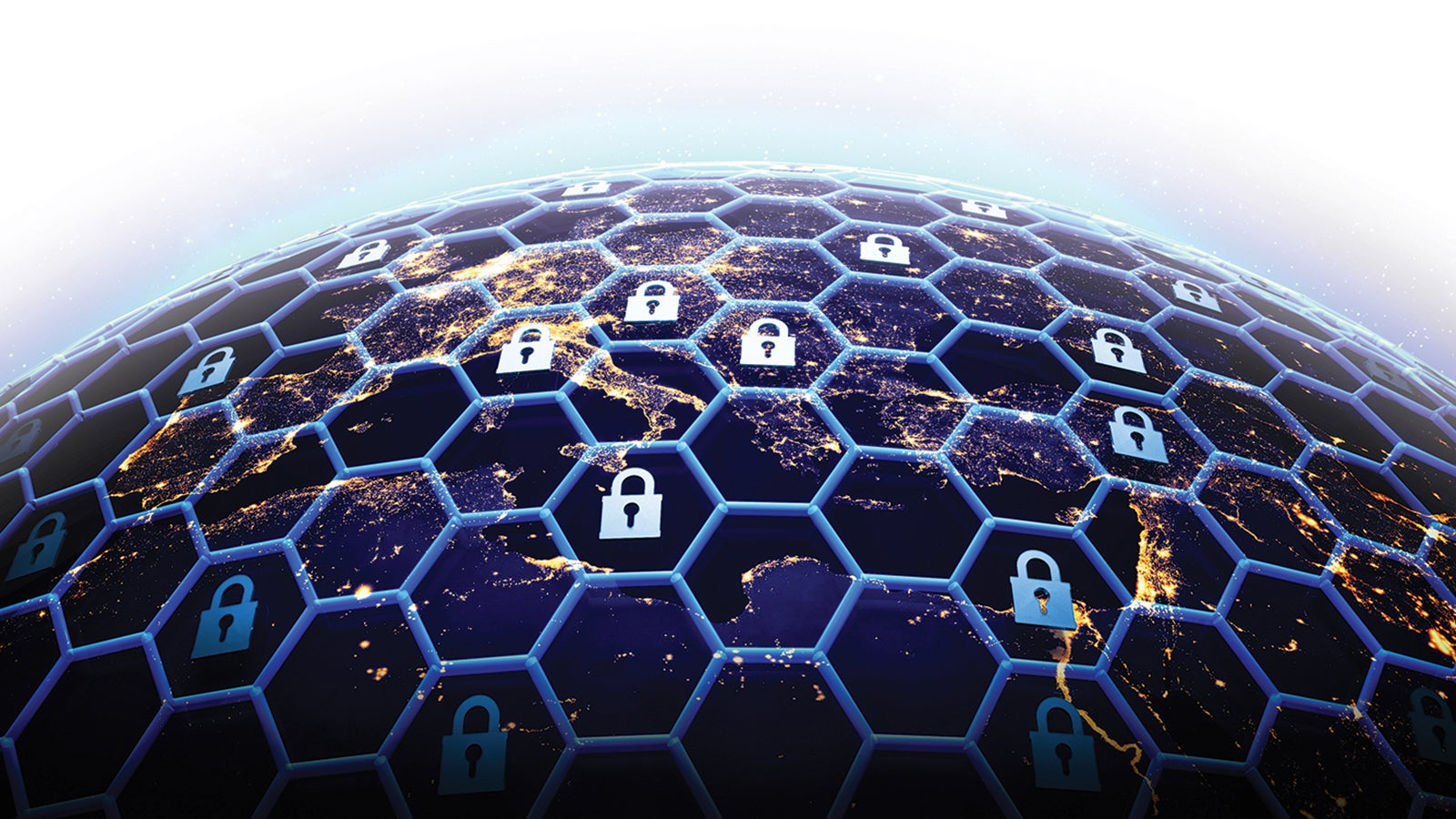 However, after one point is attacked, every other point in the network is aware and prepared, not allowing the block to continue. When someone attempts to hack the system, a change to the record is made. A change in the record changes the hash, which no longer matches the previous one. The hash is the code connecting one block to another in the chain. If the code does not match, the block is not added to the chain. It is a failed mutation. In the end, the hacker might escape with $1 as opposed to $1 million.

Similar to how the real-time direction-based platform and application Waze works, blockchain technology would allow the military to plot the most efficient routes and locations for pre-positioning sites and 3-D printing locations and allow convoys and incident response to reroute during chaotic situations. Scott Orgera writes in What Is Waze and How Does It Work? that just as the information gathered by Waze allows drivers to avoid congestion and first responders to identify the most efficient routes, it also allows city planners to design new infrastructure. Waze uses vast amounts of data collected by users daily to accomplish this.

The military could use this same information to identify pre-positioning sites and safe convoy routes, and to ensure infrastructure is built along a desired path.

The network would stay updated by users and computers sharing important information on what they encounter along a convoy. This could be used to seamlessly predict accurate routes to get the right supplies to the right locations when needed. A knowledge-sharing system could be created that operates like Wikipedia. However, it would use blockchain technology and operate more like a new online encyclopedia company that actually uses blockchain technology called Everipedia. In The Wikipedia Competitor That’s Harnessing Blockchain for Epistemological Supremacy, Peter Rubin writes that Everipedia uses a point system called IQ when creating and approving articles.

By creating and curating legitimate articles, IQ is converted to token-based currency, providing editors a financial stake in Everipedia. It prevents bad actors from creating false articles and from spreading fake news. Rubin writes that there is no centralized server or server cost, and a live bot compares ongoing changes, learning from each previous change. The live bot can remove rogue nodes and false articles within minutes.

The military could mimic this idea and create a knowledge-sharing platform allowing commanders to communicate with each other using a system similar to the IQ point system. This live interaction, moderated by artificial intelligence, could create a true command post of the future, just without the command post.

Using technology like Waze, but incorporating blockchain technology, input from millions of civilians and military drivers could be used to alert convoys of attacks, IEDs and enemy obstacles along a path. Civilian and military vehicles could function as nodes to allow creation of a community of logisticians by presenting new ways to connect with units and convoys. The military could not only create more efficient convoys, but could create a decentralized approach to build smart contracts with host-nation governments.

Similar to how Waze is building a way for drivers and passengers to create smart contracts, the military could take a similar approach. If Waze is successful, it will create a way to allow drivers to pick up passengers traveling in the same direction for a fee. Yet there is no Uber-like company taking a portion of it. There is no central authority controlling it. Think of the benefits this type of technology could bring to the contracting and acquisition system. Moreover, the military could create a system where supplies are looking for the convoy instead of the convoy looking for supplies. This could provide a way to get supplies to soldiers more efficiently and fill each truck so convoys are not unnecessarily risking lives.

When spare parts, or even food, are ordered, do we have any idea what the value or safety of the product is? When creating a part for an aircraft using a 3-D printer, what’s to ensure the printer wasn’t hacked, creating a defective part leading to disaster? With blockchain technology, every part could be tracked to its point of origin.

This would also assist in disputes over contracts or purchases as nothing in the block can be manipulated or erased. Robert Hackett writes in Walmart and 9 Food Giants Team Up on IBM Blockchain Plans that in the food industry, Walmart is starting to use blockchain technology to keep track of its purchases. For example, if it purchases a piece of meat, the record will include where the meat originated, where it was processed and stored, where it was transported and at what temperature, and its sell-by date.

This kind of tracking would force transparency, which is critical in the U.S. It would show where taxpayer dollars are going and to whom they are going. This would have brought benefits in Iraq and Afghanistan as we could have tracked where taxpayer dollars went within those countries’ governments. Blockchain technology would avoid a blood diamond scenario. Essentially, it would prevent the funding of a terrorist organization.

Additionally, this technology could be used to ensure spare parts are not hacked when created by a 3-D printer. The military could do this by using Keyless Signature Infrastructure (KSI) instead of the traditional Public Key Infrastructure (PKI). Ben Dickson discusses the potential of this technology in How Blockchain Can Help Fight Cyberattacks. Dickson writes about the benefits of KSI: It can verify the integrity of data by running hash functions and comparing results against original metadata stored on the blockchain. KSI is distributed between the network, where PKI uses asymmetric encryption, and a cache of public keys maintained by a centralized certificate authority.

Think of the ways using blockchain technology could add value to the military and the U.S. government: from monitoring the many parts needed to make an F-35 fighter jet, to ensuring government contracts are kept in check while providing what’s needed, to safeguarding the digital identity of service members and/or contractors, to managing documentation of refugees, to tracking shipments of supplies and food in seconds rather than days or months, and to ensuring funding goes to those who need it.