Amid a difficult and turbulent year, Army Chief of Staff Gen. James McConville describes the state of the Army in one word: strong.

In a demanding year with formidable challenges, the Army grappled with a pandemic, supported civil authorities in the face of widespread protests and demonstrations, responded to natural disasters, deployed with practically no notice to the Middle East and continued to put boots on the ground around the globe.

This was accomplished without diminishing strength, McConville said, declaring the force is “much more ready than we’ve been, really, over the last four or five, six years,” and has honed its ability to quickly deploy “highly trained, disciplined, fit organizations.”

That’s not to say any of this has been easy, especially with the ever-present threat of COVID-19. “Everything is hard with COVID,” McConville said.

But the Army is propelled by its people, who McConville calls the Army’s greatest strength and most important weapon system.

“It’s great to have high-speed tanks and helicopters, long-range fires and all these materiel things that we need, but at the end of the day, it’s about the soldier,” McConville said. “It’s about people, and people matter the most, at least to me, and to the Army, because winning matters, and we win through our people. That’s why this is important.”

McConville is confident the Army will remain on track as it trains to meet the next mission at home or abroad, all while completing a sweeping transformation that will touch every part of the force.

Army modernization, an effort fully launched in 2017, is at a “critical stage,” McConville said. “The time is now to make sure that these systems that are in development, we can get into the hands of soldiers,” he said, adding, “Every dollar counts. Every second counts.”

The change must be transformational, he said, not just focused on building better equipment. In the 1980s, the Army was building its AirLand Battle doctrine and introducing the so-called Big Five—the Abrams tank, Bradley Fighting Vehicle, Apache helicopter, Black Hawk helicopter and Patriot missile system.

It refined the all-volunteer force and stood up the Ranger regiment, the 160th Special Operations Aviation Regiment and developed its combat training centers, McConville said.

In the 40 years since, the Army has “incrementally improved those systems,” he said. As the Army and the military prepare for great-power competition and a possible fight against a near-peer adversary, it must once again find a new way to compete, McConville said.

It also is moving to the cloud, understanding the importance of data and standing up a Software Factory as part of the U.S. Army Futures Command in Austin, Texas.

The Army also continues transforming how it recruits, retains and manages its people. “We’re in a war for talent, and we want the best and brightest to come into the United States Army,” McConville said. “They need to represent the diversity of the nation, and we have to compete for that.”

Efforts include a marketplace-style assignments process allowing officers and NCOs to compete for jobs they want, and assessments to better select officers for battalion- and brigade-level command.

“Battalion command is, I would argue, the most consequential command because those lieutenant colonels and sergeants major have a tremendous influence on where the rubber meets the road for the soldiers they’re in charge of,” McConville said.

McConville pointed to the Army’s Project Inclusion effort, which works to eliminate bias and build on the trust that’s so critical in the service.

“We’ve got to make sure that every single person in the United States Army feels that they are a valued member of the team,” he said. “Diversity is a statistic, but inclusion means that people feel valued. We want to make sure people feel they belong and that they have the opportunity to rise to the highest levels.” 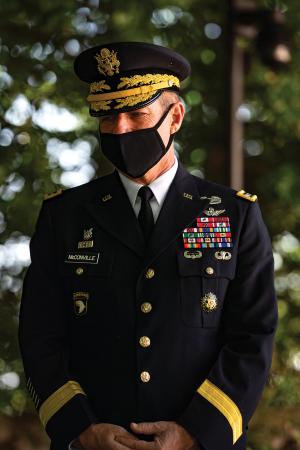 McConville and other Army leaders are investing time talking to commanders and putting initiatives in place to address these issues, he said. “Those issues hurt our soldiers, and they impact our ability to do our job,” he said.

He cited Sgt. Maj. of the Army Michael Grinston’s “This is My Squad” initiative, where the use of the term “squad” is a metaphor that applies to every formation in the Army. “What it really means is at the lowest level, we are developing cohesive teams where everyone treats everyone with dignity and respect, and everyone takes care of each other,” McConville said.

He has high hopes. “And if you just do those two things … you won’t have sexual harassment and sexual assault, you won’t have racism or extremism in the force, and you may be able to prevent suicides because you know each other, you’re taking care of each other,” McConville said.

Soldiers must dedicate time to have “tough conversations” so they can better understand where their teammates are coming from and learn their stories, he said. “Every soldier, every noncommissioned officer and every officer has a story,” he said.

An example he cited is the Army’s medical response to the COVID-19 pandemic. From standing up field hospitals to bolstering civilian hospitals, soldiers from all components have helped “protect the American people in a way that, quite frankly, I never envisioned as the chief of staff of the Army,” McConville said.

As he looks to the new year, McConville said he’s working to make sure the Army remains strong.