At the height of World War II, Army Chief of Staff Gen. George C. Marshall addressed the difficulty of selecting competent combat leaders before their employment in active operations. “The most important factor of all,” Marshall said, “is character, which involves integrity, unselfish and devoted purpose, a sturdiness of bearing when everything goes wrong and all are critical, and a willingness to sacrifice self in the interest of the common good.” 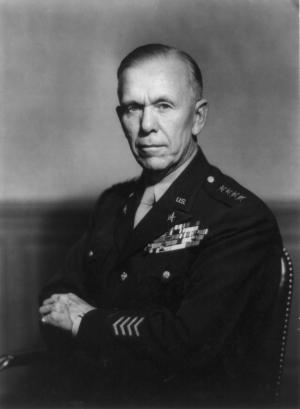 Three unorthodox commanders in World War II personified Marshall’s selection criteria. Despite their caustic personalities and rather strong vocabularies, Gens. Joseph W. Stilwell and George S. Patton Jr. and Maj. Gen. Terry de la Mesa Allen more than justified Marshall’s confidence to lead American soldiers in battle. In the early stages of the war, Marshall assigned each to critical leadership roles. The Army chief seemed unimpressed by the prejudices against this trio of commanders in certain quarters, maintaining that such prejudices attach frequently to persons of strong personality.

Joseph Warren Stilwell was destined to be a soldier, albeit over his father’s objections. Graduating from West Point in 1904, Stilwell served as the U.S. Fourth Corps intelligence officer and helped plan the St. Mihiel Offensive in World War I. Awarded the Distinguished Service Medal for his service in France, he found his true calling in China, where he served three tours before World War II, one of them as a battalion commander in Marshall’s regiment in the early 1920s.

Marshall, himself an “old China hand,” assumed the post of assistant commandant of the U.S. Army Infantry School at Fort Benning, Ga., in 1927. There Marshall strove to revamp instruction and technique. Heading the Tactical Section at Fort Benning in 1930 was Lt. Col. Stilwell. Marshall had sought him out and held the position as chief of the Tactical Section open for a year until Stilwell became available for reassignment. Stilwell did not disappoint.

What attracted him to Marshall was the future Army chief of staff’s penchant for nonconformity. In the words of Marshall’s foremost biographer, Forrest C. Pogue, Stilwell was “intense, intolerant, energetic, sparing neither himself nor those who worked for him. A rebel by instinct, Stilwell chafed against any and all authority, mocked at those in command, and walked the razor’s edge of insubordination.” Nevertheless, Stilwell was a brilliant soldier, an excellent instructor and a superb trainer of ground troops.

After Stilwell left the Infantry School, he returned to China, where he served as the military attaché at the U.S. Legation in Beijing. So highly did Marshall prize Stilwell for his candor and tactical expertise that Stilwell became the second colonel to receive stars once Marshall became Army chief of staff.

Once the U.S. entered the war, the American military mission changed significantly. Chiang Kai-shek, now commander in chief of the China Theater, requested a senior commander of at least lieutenant general rank to serve as his chief of staff. In Marshall’s eyes, Stilwell was the most qualified officer to meet Chiang’s criteria.

Stilwell would have preferred a European command, but he told the chief of staff, “I’ll go where I’m sent.” That type of unselfish service endeared Stilwell to Marshall, and the Army chief became “a more determined partisan of that general’s cause than that of any other officer in the war,” Pogue wrote.

Another one of Marshall’s favorite officers was George S. Patton Jr. Patton, a friend of Secretary of War Henry L. Stimson and Marshall since World War I, cultivated his relationship with the new Army chief of staff in 1939. Two years later, Maj. Gen. Patton commanded the 2nd Armored Division at Fort Benning. In the Louisiana-Texas maneuvers of September 1941, Patton stole the show with his slashing attacks against the opposing army.

In a sense, Patton and Marshall were polar opposites. In contrast to Marshall’s reserved demeanor and careful judgments, Patton’s flamboyance and profanity were known Armywide.

Marshall remembered Marshall’s wife saying to Patton, when Patton was a colonel, “George, you mustn’t talk like that. You say these outrageous things and then you look at me to see if I’m going to smile … and a general cannot talk in any such wild way.” Marshall hardly condoned Patton’s profanity, but he knew his wife had hit the nail on the head.

Marshall could overlook Patton’s character flaws because the Army chief recognized that even though Patton was 56 years old by the time of Pearl Harbor, he was the epitome of vigor and leadership. According to Pogue, Patton’s love of violence, his needless profanity and obscenity, and his gaudy showmanship were serious defects in a commander. Yet Marshall tolerated Patton’s behavior because he saw Patton as a skilled professional who developed a natural talent for fighting and the ability to motivate soldiers to go beyond what they believed themselves capable of doing in battle.

Along with Stilwell, Marshall ensured that Patton received his general’s star on Oct. 2, 1940. Six months later, Patton received his second star and was assigned as commander of the 2nd Armored Division. His performance at the U.S. Army GHQ Maneuvers of 1941 added to Patton’s fame and justified Marshall’s support. At the Army chief of staff’s recommendation, Patton received a corps-level command of I Armored Corps a month following the Japanese attack on Pearl Harbor.

In early 1942, Marshall assigned Patton to command the Desert Training Center, Calif. There, Patton never lost sight of his true objective—preparing his men for combat. His time at the training center was short-lived because Marshall had something more urgent for Patton. At British Prime Minister Winston Churchill’s urging, U.S. President Franklin D. Roosevelt approved the invasion of North Africa for November 1942. Code-named Operation Torch, the invasion under the command of Gen. Dwight D. Eisenhower consisted of three principal landings. The Western Task Force was to land on the western coast of Africa under Patton’s command.

Three months later, following the disaster at Kasserine Pass in Tunisia in February 1943, Patton received command of II Corps. One week later, Congress approved Patton’s promotion to lieutenant general. Though he commanded American troops in combat for less than three years, Patton emerged as the finest operational commander of the European war. None of it would have been possible had it not been for Marshall’s unwavering support of his recalcitrant commander. More than once, Marshall saved Patton from himself, once in Sicily following the infamous slapping incidents, when Patton slapped two soldiers, and again in England before the Normandy invasion when Patton delivered indiscreet remarks about the Soviet Union. In the end, Patton’s talent for dashing attacks outweighed his demerits.

As a major in 1931, Allen enrolled in the advanced course at the Infantry School. Arriving at Fort Benning, Allen accepted a position as cavalry instructor at the school where Marshall was assistant commandant. Aware that Allen prided himself as a champion polo player, Marshall quizzed Allen about whether he intended to work or to play polo while he was in Georgia. The irascible Allen informed him that he hoped to do both.

During his year at Fort Benning, Allen impressed Marshall with his understanding of operations, strategy and tactics. From then on, the mercurial Allen had a strong supporter. Upon Allen’s graduation from the advanced course, Marshall rated him as “superior” in physical activity, endurance, tact, judgment, leadership initiative and “force in carrying out with energy and resolution what is believed reasonable, right or duty.”

Six years later, Allen, then stationed at Fort Riley, Kan., sent Marshall a copy of the U.S. Army Cavalry School’s text that he had written—Methods of Combat for Cavalry—that included instructional matter on the execution of combat missions. Marshall commented that Allen’s pedagogical methods were identical to those Marshall sponsored during his tenure as assistant commandant. 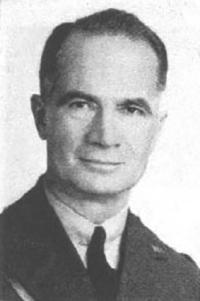 From that day forward, Marshall demonstrated a strong attachment to Allen. Allen’s fondness for fighting may have made him enemies in peacetime, but friends in battle. One of those friends happened to be the future Army chief of staff. Marshall promoted Allen from lieutenant colonel to brigadier general in October 1940 ahead of 900 men on the promotion list. Allen’s friend Patton congratulated his fellow cavalryman: “The ARMY HAS CERTAINLY GONE TO HELL when both of us are made,” meaning promoted.

Accelerated promotion to general officer resulted in recriminations from previous peers, but Marshall stood by his man. A year later, Marshall wrote, Allen “can do anything with men and officers, though unprepossessing in appearance and apparently casual in manner.”

By May 1942, Allen was commander of the 36th Infantry Division at Camp Blanding, Fla., when he received notice that Marshall had assigned him command of the 1st Infantry Division at Fort Benning. Allen commanded the “Fighting First” in North Africa and Sicily, but II Corps commander Maj. Gen. Omar N. Bradley relieved him of command for “weariness” at the conclusion of the Sicilian campaign. The real reason was Bradley’s disdain for the free-spirited Allen. In Bradley’s opinion, Allen was too undisciplined in spirit, and he was not a team player.

Was Allen’s relief justified? It depends who you ask. Brought back to the United States, Allen received a chance at redemption when Marshall assigned him command of the 104th “Timberwolf” Infantry Division, which he led with high distinction for the remainder of the European war.

In a letter to Maj. Gen. Roy D. Keehn in June 1942, Marshall wrote that highly efficient and energetic leadership is essential to success. In a radio broadcast to cadets and alumni of the U.S. Military Academy on March 13, 1943, Marshall amplified his sentiments when he stated, “Our success in this war now depends on leadership. … Given adequate leadership, the victory is certain.”

What leadership traits did Stilwell, Patton and Allen possess that Marshall admired? The common denominators were colorful speech “that no writer could fully capture … on paper, because [their] talk was so wonderfully profane it couldn’t be put down in black and white,” Pyle wrote about Allen, but it could well apply to all three. More times than not, the trio also demonstrated they were devoid of tact. Similarly, all three commanders cultivated close relationships with Marshall throughout their respective careers.

What mattered most to the Army chief of staff, however, was that Stilwell, Patton and Allen were natural fighters and commanders who skillfully trained, motivated and led soldiers in battle. Throughout his own career, Marshall demonstrated a genuine fondness for rough-and-ready fighters. Marshall enjoyed the company of “swashbuckling” commanders who led from the front lines. Stilwell, Patton and Allen proved to be warriors at heart. Now, 75 years after World War II, the Army, as well as the nation, remain in their debt.