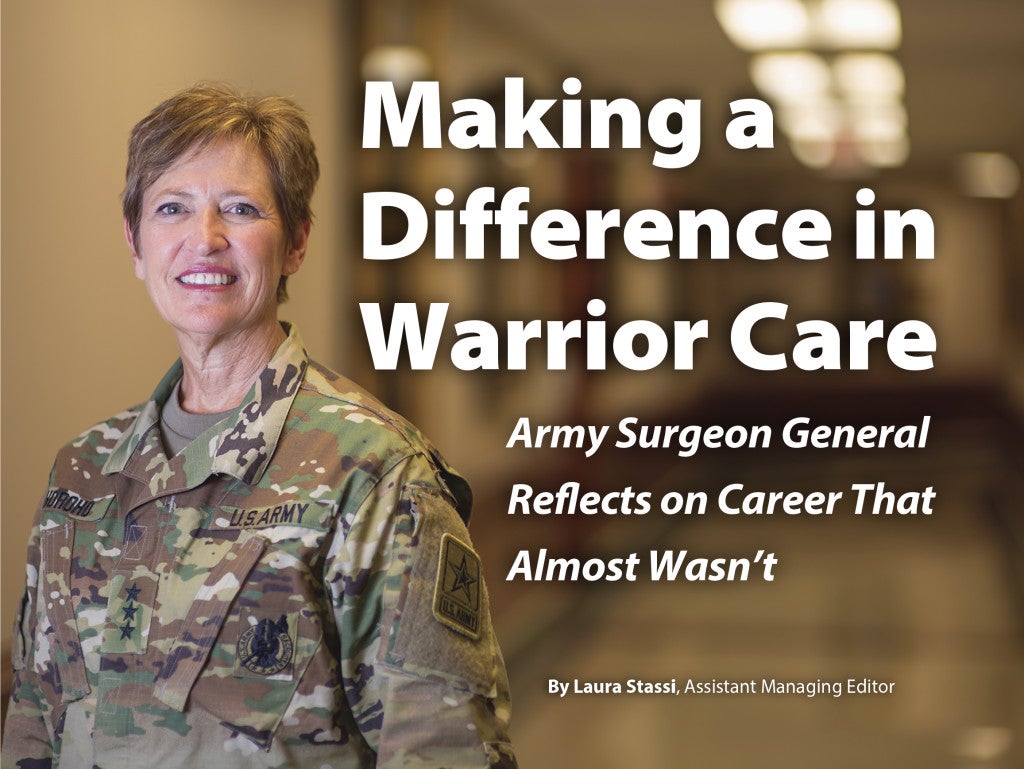 Lt. Gen. Patricia D. Horoho is the first female and first nurse to be nominated and confirmed by Congress as the surgeon general of the Army and commanding general of U.S. Army Medical Command. She was also the first married woman with children to become chief of the Army Nurse Corps. She has other “firsts” on her resume as well as a long list of honors and awards compiled in her 33-year career, but she never intended to be a trailblazer. Her career is more the result of mentorship and serendipity than strategy, she says, and in fact, she almost separated from the Army after completing her first duty assignment.

“My entire career has surprised me,” Horoho said, laughing.

She talked with ARMY magazine several weeks before her change-of-command and retirement ceremonies. Both are scheduled for December.

Horoho—then known as Patty Dallas—grew up in Fayetteville, N.C. She is the daughter of a retired Army lieutenant colonel, a Special Forces soldier who served in three wars. Still, a military career wasn’t her first choice. “I wanted to be a stewardess, but I didn’t meet the height requirement.”

Horoho studied at Appalachian State University for two years, then transferred to the University of North Carolina, Chapel Hill when her mother and grandfather persuaded her to consider nursing. Eager to “do something different,” she called an Army recruiter her senior year and committed to three years in uniform. She earned a bachelor’s degree in nursing in 1982, and then moved to Fort Carson, Colo., for duty as a medical surgical nurse at Evans Army Community Hospital.

Horoho’s brother, an infantry officer, and brother-in-law, a field artillery officer, were also posted at Fort Carson. So when her assignment officer called with an offer to transfer to Letterman Army Medical Center, Calif., and said she had 24 hours to think about it, “I went home, and I really thought about it,” Horoho said. She called the next day and politely declined, saying she preferred to stay at Fort Carson. The infuriated major hung up on her.

‘I Fell in Love With Being a Soldier’
Chagrined, Horoho went to her chief nurse to tell her what had happened and turn in her resignation papers. Over the next several weeks, though, she began having second thoughts.

“I fell in love with being a soldier,” she said, “and I realized I was part of something much bigger than myself.”

When the chief nurse unexpectedly stopped by the ER one Sunday and told her, “Not all doors are closed,” Horoho took it as a sign to figure out a way to stay on active duty. She only recently learned that the chief nurse, convinced a bright military future was ahead of Horoho, never submitted the separation papers.

“There are many mentors out there,” Horoho said, “and you don’t even know, sometimes, when you’re being mentored.”

After additional training, Horoho was assigned to Harrisburg and Pittsburgh, Pa., recruiting battalions under the 1st Medical Brigade. Horoho called this the “best assignment in my life” because that’s where she met her husband, now-retired Col. Ray Horoho. They married in 1990. 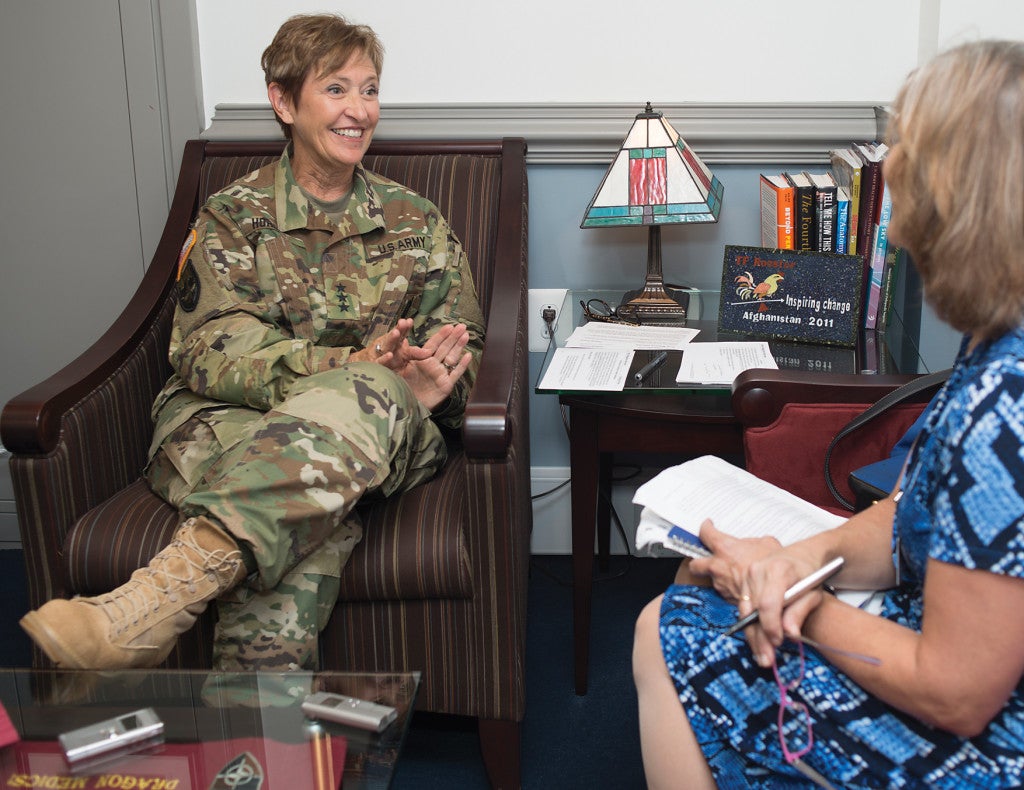 Lt. Gen. Patricia D. Horoho reflects on her military career weeks before she was scheduled to relinquish command and then retire. (Credit: Ferdinand H. Thomas II) 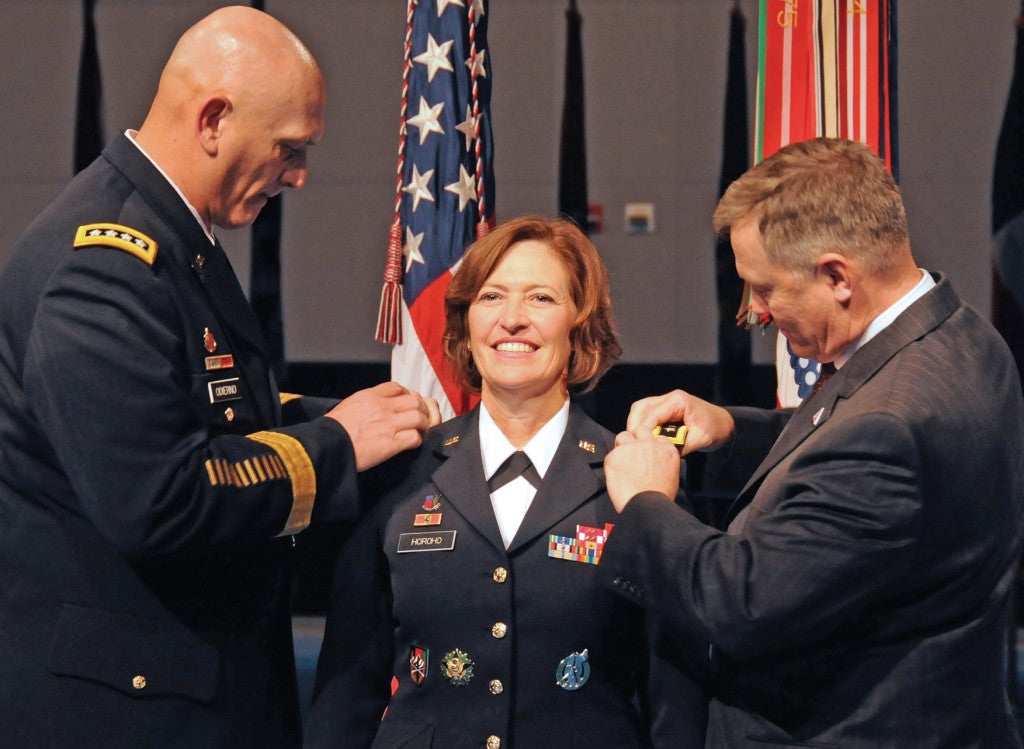 Horoho was promoted to lieutenant general when she was named commanding general of U.S. Army Medical Command and Army surgeon general in 2011. She’s shown here receiving the three-star epaulets from the Army’s then-Chief of Staff Gen. Raymond T. Odierno

In 1992, she earned a master’s degree in nursing from the University of Pittsburgh as a trauma clinical nurse specialist. Her explorations of critical incident stress debriefings, burn traumas and burn dressings would prove invaluable two years later, when she was on duty at Fort Bragg, N.C., during the Green Ramp disaster.

On March 23, 1994, an F-16 fighter plane and C-130 cargo plane collided in air while both were trying to land at then-Pope Air Force Base, adjacent to Fort Bragg. About 500 Army paratroopers from Fort Bragg’s XVIII Airborne Corps were assembled on the Pope airfield for training jumps when the collision occurred. The C-130 pilot managed to land his craft, but the F-16 crashed into the ground after the pilots ejected. Twenty-four paratroopers with the 82nd Airborne Division were killed and about 100 others were injured, many with severe burns.

Within minutes of the disaster, Fort Bragg’s Womack Army Medical Center was swamped with casualties; Horoho was chief nurse of the emergency department. In an account of Womack’s response that Horoho wrote in 1995, she described the scene as “controlled chaos.”

Horoho said the disaster made her realize “the great skills nurses possess when it comes to warrior care,” including critical thinking, effective teamwork, and a keen focus on patient-centered care.

Career Challenges
About seven years afterward, Horoho would again call on her disaster-response skills. Then the deputy surgeon general of the Army and chief of the U.S. Army Nurse Corps, she was working in the Pentagon on Sept. 11, 2001, when a plane deliberately crashed into the building. Initially, Horoho evacuated with colleagues. When she got outside and saw where the plane had impacted the building, she instinctively ran toward the crash site.

“I knew … there were going to be victims, and I knew that’s where I needed to be,” Horoho said in an interview with the Army’s Office of Medical History about two weeks after 9/11. She went back inside the Pentagon and led efforts to help the injured.

“We train and prepare so we can be ready in a moment’s notice to respond,” Horoho said, adding, “I believe God places you in the right position and the right time, for all the right reasons. You learn skill sets and experience to make a positive difference in someone’s life, or to set the conditions for someone else to be successful.”

Horoho has faced other challenges in her career. She was named commander of Walter Reed Health Care System in May 2007, a few months after The Washington Post reported serious issues at the hospital, including dilapidated conditions and neglectful treatment of patients. Horoho said that was “a defining moment, not just for the Army and Army Medicine but for military medicine and our nation.”

“It forced a conversation that we, as a nation, needed to have because of protracted war,” she said. “What policies should we have in place to care for warriors and their families, and what are the resources that need to be committed? We realized [for the first time since the Vietnam War years] that care doesn’t stop when soldiers leave the hospital.”

The scandal led to funding, personnel and program improvements, Horoho noted. “There was tremendous goodness that came out of a very horrible situation.”

Under Horoho’s leadership, Walter Reed went from being named the worst facility in the DoD system to ranking No. 1 in customer service a year later. “What that [experience] showed me is that in the midst of chaos, when you can give a very clear vision and the right leadership support with people, resources and a common goal, miracles can happen,” she said. “Improvements can be made. There are opportunities in every adverse situation.”

Medicine Making Strides
Army Medicine has continued to make strides during Horoho’s tenure. “We’ve worked hard to position ourselves as agile, flexible and responsive to whatever threat, whatever mission is there.” She called brain health “the new frontier,” and said the Army will continue important research partnerships with the NFL and other organizations to study the brain “not through the lens of a disease process, but through the lens of improving health and cognitive performance.”

She also said the Army will continue global missions similar to last year’s successful deployment to Africa to contain the Ebola virus. “We do about 90 percent of the [medical] research for the DoD,” Horoho said. The Army collaborated with the Air Force and Navy because “we believe that this was a mission to which the entire military health care system should respond.”

Horoho also spearheaded a reorganization of Army Medicine to fully integrate all care—medical, warrior care and transition, dental and public health—and enhance quality, access and safety. Fundamental to this reorganization is a shift in thinking.

“The command has transformed almost every aspect in the midst of the Army itself transforming and downsizing,” Horoho added. “We are a global organization that really believes in improving the health of the nation by improving the health of the Army. No other health system in the world can do all that we do and also take those individuals and deploy, and make a difference in another country. That, to me, is the gift Army Medicine brings to our nation, and brings to our Army.”

Horoho said “it’s an exciting time,” and that hers is “the best command in the world.” Still, she seemed ready to retire. She’s planning to take several months off to relax—“the first time since high school that I haven’t had a job”—and spend time with family, including her two grown children. Then she wants to work in some capacity to be “a driver of change in health and health care, and in improving health outcomes of our nation.”

When Horoho meets with young officers, she tells them that feeling comfortable as a leader is a signal to move out of their comfort zone and do something different, and that “during the uncomfortable time is when you’re growing and actually being more effective.” In retirement, Horoho plans to take her own advice. She said she wants a new role that will “move me out of my comfort zone.”

“I have a lot to contribute,” she said. “I want to be part of the solution.”