Loyalty is listed first among the Army Values, which is unfortunate. It should not even be one of the seven Army Values.

Regardless of how Army doctrine defines the term, soldiers understand loyalty by its common meaning—as devotion to a person or group. All too often, soldiers’ sense of loyalty pressures them to violate other Army Values and the Army’s professional ethic.

Since 1998, the official Army Values have been Loyalty, Duty, Respect, Selfless service, Honor, Integrity and Personal courage, which when capitalized that way conveniently create the acronym LDRSHIP. Soldiers memorize these values in basic training and are encouraged to refer to the values when deciding how they should act at all times, especially in ethically challenging situations.

Referring to the Army Values can indeed guide and motivate soldiers to act ethically under duress. For example, soldiers should perform their duties, even when they are exhausted. They should treat everyone with respect, even when detaining hateful enemy prisoners. They should act courageously, even when their lives are at risk.

Unlike the other Army Values, however, loyalty is not a reliable guide for ethical conduct. Feelings of loyalty often compel soldiers to disregard their ethical responsibilities. The demands of loyalty—at least as soldiers perceive them—routinely create conflicts with the values of duty, respect and integrity. 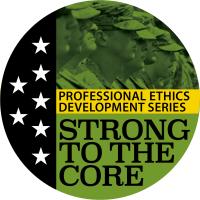 Consider a junior enlisted soldier who knows his peers are hazing newly arrived privates; or an NCO performing staff-duty checks who discovers violations that will result in punishment of a fellow NCO if reported; or an officer conducting a FLIPL (financial liability investigation for property loss) who realizes that a fellow officer was negligent and should be found financially liable. In each case, the soldier’s sense of personal loyalty will likely generate an internal dialogue that argues against doing what’s right as a professional.

Proponents of the current list of Army Values might argue that this criticism of loyalty is unfair because it assumes incorrectly prioritized loyalties. The Army’s official definition makes clear that soldiers’ loyalties should be ordered hierarchically—such that loyalty to principle has priority over loyalty to people. Army doctrine defines loyalty as “True faith and allegiance to the U.S. Constitution, the Army, your unit and other Soldiers,” in that order.

That ordering of loyalties—from abstract to concrete, from impersonal to personal—briefs well but is contrary to human nature. Loyalty is interpersonal. Like politics, loyalty is local. Soldiers typically do feel a meaningful allegiance to the ideals of our Constitution, but they give their primary professional loyalties to those fellow soldiers with whom they live and work each day.

Everyday life in the Army provides ample evidence that soldiers’ loyalties are primarily to the people they serve alongside, not to a document on display far away. For example, I am not aware of any soldier ever being labeled “disloyal” or being blackballed by their unit for failing to uphold a tenet of the Constitution. On the other hand, I do know of soldiers who suffered those fates for “disloyally” refusing to tolerate unethical people or practices in their units.

Loyalty can become a cancer that spreads, causing the misdeeds of a few to infect much more of an organization. The good news is that relatively few soldiers behave unethically; the bad news is that too many of their fellow soldiers are willing to overlook unethical conduct under the guise of “loyalty.” Sometimes that loyalty is personal, as in cases where subordinates tolerate a popular commander’s extramarital affair or a beloved subordinate’s misuse of government property. Sometimes that loyalty is organizational, as when soldiers feel obligated to protect and defend the good reputation of their unit. Soldiers understandably don’t want their in-group’s “dirty laundry” to be aired publicly and subjected to criticism, so in the name of loyalty, they ignore or cover up unethical behaviors occurring within their unit.

Especially in this era of information warfare and social media, organizations can come to believe that preserving their public image is a mission-essential task. The line of argument is: “We need to do X [attract the best people, or maintain public support, or survive the coming restructuring, or deny comfort to our enemies, etc.] in order to accomplish our mission. To do so, we have to maintain our good reputation. Therefore, anything that occurs within our unit that would harm its reputation should be overlooked or handled in-house. To do anything less would be disloyal because it threatens mission accomplishment.” Of course, the parts about covering up unethical behaviors and punishing those who won’t are rarely spoken aloud; still, they are implied and widely understood.

We shouldn’t be surprised that units that have the best reputations—those with the most to lose—would feel the most pressure to compromise their integrity to preserve their image.

This article is not intended to be a screed against loyalty per se. Loyalty should and invariably does characterize the culture of good Army units. Loyalty and trust go hand in hand, laterally and vertically. Bonds of loyalty not only make the Army more effective, but they also make military service a sublime experience for many soldiers. My argument here is simply that loyalty should not be one of the Army’s seven top values, especially not its first one.

The Army’s enthusiasm for mandating loyalty should be tempered by the observation that leaders and organizations that demand loyalty typically aren’t worthy of it. Despots like Hitler and Saddam Hussein demanded pledges of loyalty. Nazi leader Heinrich Himmler declared loyalty as the first of the quasi-military SS’s four values (along with obedience, bravery and truthfulness). Criminal gangs make loyalty the measure of membership. Loyalty, it turns out, is typically the highest value in organizations that lack virtue.

The Army has a virtuous mission—the protection of human rights and the common good—so it has no need to compel loyalty. Bonds of loyalty will emerge and strengthen naturally in Army units that strive to accomplish their missions while behaving ethically. Soldiers cannot help but feel a deep sense of loyalty toward fellow soldiers who carry out their duties with courage, integrity and selflessness. Soldiers’ common moral purpose and shared organizational values create conditions in which loyalties thrive.

When it comes to loyalty, then, the challenge for Army leaders is to ensure it doesn’t grow out of control and begin to strangle more important organizational values.

Leaders can keep loyalty in check by exposing it to critical reflection. Are the loyalties in their formations reinforcing good order and discipline? What conflicts (if any) are soldiers experiencing between their personal integrity and group loyalties?

Imagine the positive impact of a leader who facilitates a candid conversation with their subordinates that opens with, “Are there any areas in which our sense of loyalty to each other or our unit is blinding or preventing us from doing what’s right?” The resulting conversation might be uncomfortable, and correcting any situations that might come to light might damage (in the short term) the unit’s image, but they would be the right things to do.

The Army Values probably are not going to be revised anytime soon. (If they are, I recommend the existing and more holistic “Character, Competence, Commitment” or “Duty, Honor, Country” frameworks.)

Still, leaders can and should think more deeply about the value of loyalty, assess how loyalties in their formations are impacting their soldiers’ ethical decision-making, and intervene as needed to foster healthier ethical cultures.