Retired Gen. Martin E. Dempsey, the 18th chairman of the Joint Chiefs of Staff and 37th Army chief of staff, was selected by the Council of Trustees of the Association of the U.S. Army as the 2019 recipient of the George Catlett Marshall Medal for sustained commitment to the men and women of America’s armed forces.

This award, AUSA’s highest honor for distinguished public service, will be presented Oct. 16 at the George Catlett Marshall Memorial Dinner, the final event of the 2019 Association of the U.S. Army Annual Meeting and Exposition in Washington, D.C.

Dempsey, a career armor officer and 1974 graduate of the U.S. Military Academy at West Point, New York, retired in 2015 after 41 years of military service that included combat service in Iraq and professional development assignments at West Point, the U.S. Army Command and General Staff College, and the National War College.

He became Army chief of staff in April 2011 and chairman of the Joint Chiefs in September 2011. Since retiring, Dempsey has been a devoted supporter of service members, veterans and their families, and Gold Star families.

As a Rubenstein Fellow at Duke University in North Carolina, he lectures and teaches about ethical leadership. He also serves as chairman of USA Basketball, the national governing body that selects the teams that represent the U.S. in international competitions, up to and including the Olympics.

In this essay, Dempsey reflects on his career, his family and leadership.

Just before I became chairman of the Joint Chiefs of Staff, I asked my staff to research how I could obtain some artifacts for my office to help me stay connected to the great military leaders of our past. In response, I received a list with several interesting possibilities, and I selected a desk that had been Gen. Douglas MacArthur’s while he was in the Philippines as commander of U.S. Army Forces in the Far East and an oil portrait from the National Portrait Gallery of Gen. George C. Marshall when he was chief of staff of the Army.

I chose to highlight these two particular leaders because each of them, in their time, faced significant economic downturns that had serious impact on the defense budget, dramatic global changes, and military conflicts with the potential to change our way of life. They were each great soldiers and skilled statesmen responsible for first building and then nurturing the great military alliances from which we benefit today. They each demonstrated a passion for lifelong learning and dedicated their lives to the service of their country.

On more than one occasion, grappling with a particularly difficult national security challenge, I would look up at Marshall—staring back at me from where I had placed his portrait—and wonder, “What would George Marshall do?”

So, my appreciation for Marshall’s leadership runs deep, and I am humbled to receive the award that bears his name. Thank you, Association of the U.S. Army.

An Army in Transition

In June 1974, I graduated from West Point full of confidence and eager to do my part in the standoff with the Soviet Union that was the Cold War. Ours was a different Army then, an Army in transition from a conscript force to an all-volunteer force, an Army in transition from training and equipping for low-intensity conflict in Vietnam to training and equipping for high-intensity conflict on the plains of Central Europe, an Army that, as it transitioned, would soon have more married soldiers than single soldiers, and an Army that shared many of the general population’s problems, including, at that time, drug use and racism. They were uncertain and dangerous times, but the camaraderie and esprit of my cavalry platoon and the quality of the leaders around me inspired and sustained me.

Over the next 41 years, I learned that I could say the same thing each time I was promoted and given the privilege of leading: We are an Army always in transition. We are always changing. We always share the general population’s problems. Times are always uncertain and dangerous. But the camaraderie and esprit, and the quality of our leaders, always inspired and sustained me. 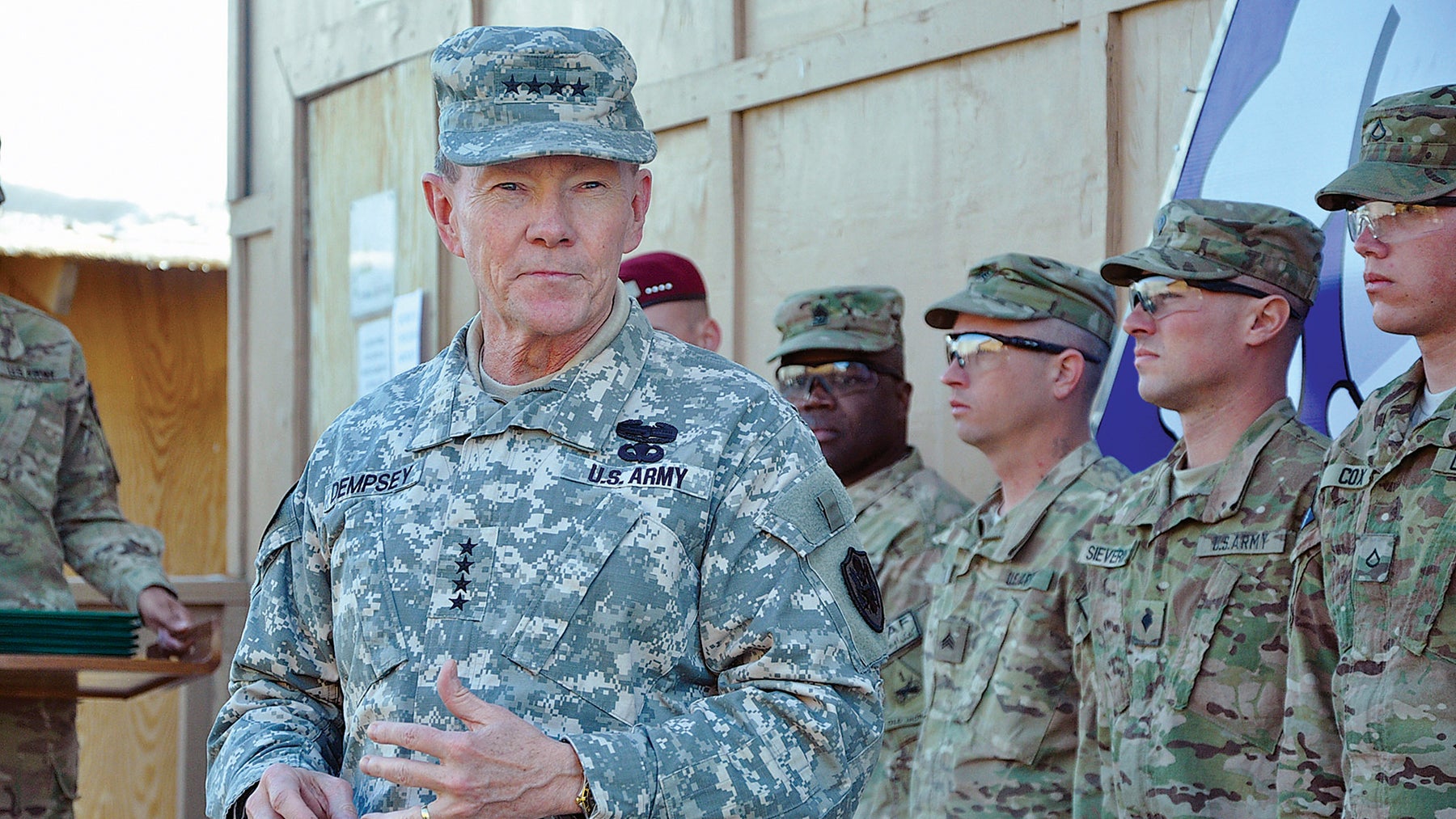 “Bloom where you are planted,” my grandmother told me long before I found myself in the Army. Good advice in any line of work, and particularly good advice in the military profession. Not every job in 41 years was a dream job, but I learned something important in all of them.

As the years passed and the company grade years became the field grade years, I sometimes wondered if I would be up to the challenge of the next promotion and greater responsibilities. When I was a cadet, I heard a West Point professor once say that no West Point class in the history of the academy had ever gone 20 years without experiencing war. In late 1990, as I approached my 17th year of service, I wondered if my class would break that historical cycle. Months later, I deployed to Operation Desert Storm wondering whether we would bear up under the responsibility of leading troops in combat. But the camaraderie and esprit of the Spearhead Division [3rd Armored Division], and the quality of its leaders, inspired and sustained me.

There is nothing like combat to enlighten and sharpen the fact that trust is what binds us together and enables us to do the unimaginable things our nation sometimes asks of us. To begin to take responsibility for the profession is to begin to ask yourself, “What have I done to earn the trust of those for whom I am responsible today?” Trust is undeniably the most profound leadership imperative, and it must be earned and then earned again.

“We take our families to war with us today,” I told the reporter from the podium in Baghdad’s Green Zone in 2004. She had asked how Operation Desert Storm and Operation Iraqi Freedom were different. My answer had surprised her, but by 2004 it had become common for soldiers to call or text (now FaceTime) with their families just minutes before they went out on patrol. Family support back home and empowering soldiers and families with as much information as possible had become critical to mission success abroad. It had become an important measure of trust between the Army and its families. Done well, we learned that family support could be a combat multiplier. Fortunately, our Army has been blessed with spouses who have put heart and soul into caring for each other and for military families. They deserve our unwavering support and our sincere gratitude.

“If someone had told me in 2003 that 12 years later we would still be deploying the all-volunteer force at [boots on the ground to dwell time] intervals less than 1:2, I would have said they were out of their mind,” I told a senator on the Senate Armed Services Committee during a 2015 hearing. Now, it’s 16 years. There are two things we’ve learned about the all-volunteer force after what has become nearly two decades of war: It will fight, and it is resilient. But we can never take it for granted. Every leader—whether on the operational or institutional side of the Army—should be concerned about our operational tempo.

In the future as in the past, the size of the Army will change based on external threats and what the nation decides it can afford. The way the Army fights will change. What must not change is the way it thinks about itself and about its responsibilities to our country. So long as it reflects the population it serves, so long as its leaders serve with both unrivaled competence and uncompromising character, so long as its members understand the unique responsibilities that come with being part of our profession, then the Army will fulfill its sacred obligation to our fellow citizens.

For the past 15 years, there has been a walnut box on my desk engraved with the words, “Make it Matter.” In it are 129 laminated cards, one for each soldier who died under my command in Iraq in 2003–04. I carry three more with me in my wallet. I often wonder what each of them could have accomplished had they not given their lives in service of their country. How many command sergeants major? Business executives? Teachers? Firefighters? Mayors? Fathers? Mothers? Since they sacrificed their potential for ours, we have an added responsibility to make sure we make the most of our potential. We have a sacred duty to make their sacrifice matter. It is in their memory that I accept the George Catlett Marshall Medal.

I’m thankful for my life in the Army. For Deanie, who made it her life, too. For Chris, Megan and Caitlin, who also served. For the West Point class of 1974. For the young men and women who granted me the privilege of leading them. For mentors named Davison and Henderson, Noles and Edwards, McWain and Hansen, Aldridge and Goff, Funk and Jordan, Shelton and Shinseki, Abizaid and Casey, Sullivan and Franks, Gates and Hagel. I hope I didn’t miss too many opportunities to make it matter.