A Life of Significance: Medal of Honor Recipient Saved Others, Serves Others

As our country commemorates the 13-year-long 50th anniversary of the Vietnam War, stories of incredible heroism and sacrifice continue to inspire.

Former  Sgt. Gary Beikirch’s story is one of those. He received a Medal of Honor for his actions on April 1, 1970, at Camp Dak Seang, Vietnam. Beikirch’s life story is recounted in Blaze of Light: The Inspiring True Story of Green Beret Medic Gary Beikirch, Medal of Honor Recipient by Marcus Brotherton. The book was to be published in late March.

Beikirch’s story begins in Rochester, New York, where he was born on Aug. 29, 1947. He joined the Army in Buffalo, New York, as the Vietnam War raged. Trained as a Special Forces medic, he was ultimately assigned to Detachment B-24, Company B, 5th Special Forces Group (Airborne), 1st Special Forces. The unit was operating in the Kontum Province of South Vietnam. 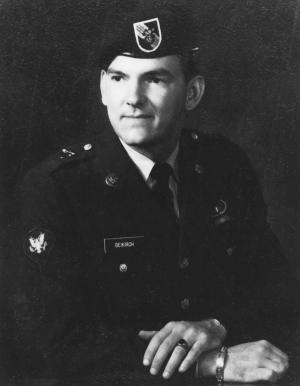 Upon deploying to Vietnam in July 1969 and traveling to Camp Dak Seang, Beikirch and his team went to work. The 12 Special Forces soldiers and over 450 Montagnard tribesmen had the mission to operate from Camp Dak Seang to interdict North Vietnamese Army (NVA) supply lines. Beikirch served as medic for his team. As time passed, the success of the U.S. and Montagnard efforts was apparent as NVA attacks on the camp began to increase. Through March 1970, growing evidence—patrols saw increasing enemy contact; jungle trails showed heavy traffic of large numbers of enemy soldiers—pointed to a major NVA attack on the camp. The only question was when the big attack would occur.

On April 1, 1970, the camp was hit. As casualties mounted, Beikirch moved both in and outside the perimeter to treat the wounded. He was hit repeatedly and was partially paralyzed by shrapnel that slammed into his back, injuring his spine. Montagnard tribesmen carried him around to the wounded, where he continued to treat them. He also continued to exchange fire with the enemy to help hold off the assault. Beikirch was shot three times in the 12-hour fight, but he kept going until collapsing after treating all the wounded.

Beikirch’s Medal of Honor citation recounts his actions in detail:

Sergeant Beikirch, with complete disregard for his personal safety, moved unhesitatingly through the withering enemy fire to his fallen comrades, applied first aid to their wounds and assisted them to the medical aid station. When informed that a seriously injured American officer was lying in an exposed position, Sergeant Beikirch ran immediately through the hail of fire. Although he was wounded seriously by fragments from an exploding enemy mortar shell, Sergeant Beikirch carried the officer to a medical aid station. Ignoring his own serious injuries, Sergeant Beikirch left the relative safety of the medical bunker to search for and evacuate other men who had been injured. He was again wounded as he dragged a critically injured Vietnamese soldier to the medical bunker while simultaneously applying mouth-to-mouth resuscitation to sustain his life. Sergeant Beikirch again refused treatment and continued his search for other casualties until he collapsed. Only then did he permit himself to be treated. Sergeant Beikirch’s complete devotion to the welfare of his comrades, at the risk of his life are in keeping with the highest traditions of the military service and reflect great credit on him, his unit, and the United States Army.

Back to the States

Beikirch’s story continued after the war and his recovery from his wounds. He briefly went to college, only to encounter disdain for being a Vietnam veteran by being spat on. Fearing he would kill the next kid who spat on him, Beikirch left college. Believing the only way he could cope with his war memories was to forget, in 1973, he moved into a cave in the White  Mountains of New Hampshire.

President Richard Nixon presents the Medal of Honor to Sgt. Gary Biekirch at the White House in October 1973.
(Credit: DoD)

There, while reading his Bible, he realized what a mess his life was. He turned his life over to the Lord. A week later, Beikirch was contacted by the Pentagon and told he would receive the Medal of Honor, the nation’s highest award for valor. Though his first inclination was to decline the medal, a certain Bible verse resonated with him: “Man that is in honor, and understandeth not, is like the beasts that perish.” President Richard Nixon presented Beikirch with the Medal of Honor at the White House in October 1973.

Upon returning to New Hampshire, Beikirch put the medal in a duffel bag and did not take it out again for seven years. During that time, Beikirch met his wife, Loreen. He proposed to her on their first date. Loreen agreed to marry him on the condition they not live in the cave. Beikirch agreed and they married. He attended seminary and served four years as an associate pastor. Realizing his true calling was working with young people, he returned to college and later became a middle school counselor, a job he held for 33 years. The couple now has three  children and 14 grandchildren.

For All Who Sacrifice

In 1981, Beikirch attended a rally to celebrate the return of American hostages just released from Iran and to protest the poor treatment Vietnam veterans had received just a few years earlier upon their return to the United States. A fellow veteran asked Beikirch to speak while wearing the Medal of Honor. Beikirch agreed to speak but declined to wear the medal.

The fellow veteran corrected Beikirch, telling him that when he wears the medal, it is not for himself but for all who sacrificed and served. Beikirch accepted that lesson and donned the medal.

Today, proudly wearing the medal, Beikirch goes across the country speaking at venues including churches, schools, civic groups, Army units and ROTC programs. His inspirational message is simple and straightforward: Seek to live a life of significance, not just one of success. He defines a life of significance as one of living for something larger than oneself and investing one’s life in others. He uses the story of his 15-year-old Montagnard bodyguard, Deo, to illustrate this point.

Deo became Beikirch’s bodyguard in Vietnam upon Beikirch’s arrival at Camp Dak Seang. Deo taught Beikirch not only how to survive in the jungle, but also how to thrive. During the battle on April 1, 1970, Deo helped carry Beikirch as he treated the wounded, then shielded Beikirch’s wounded body from a rocket-propelled grenade blast, sacrificing his own life to save Beikirch’s. Today, Beikirch uses Deo as a shining example of living life for something bigger than yourself.

Though Deo never traveled more than a few miles from where he was born, lived only 15 years, never attended school, never married or had a family, he lived to help his fellow Montagnard tribesmen, the U.S. solders with them in general and Beikirch specifically, giving his life so Beikirch might continue to live his.

Beikirch, now 72, has been recognized by his former unit, the 5th Special Forces Group. At Fort Campbell, Kentucky, where the group is based, the 2nd Battalion operations  complex is named after Beikirch. At the September 2012 dedication, it was said how Beikirch embodies part of the Special Forces creed, “I will not fail those with whom I serve.” Beikirch often returns to the Fort Campbell area for Special Forces reunions and other functions.

Beikirch serves as the Congressional Medal of Honor Society chaplain for the 70 other living recipients. He was chosen for the position four years ago by his fellow recipients. I spent some time with Beikirch in October and saw firsthand his care for his fellow Medal of Honor recipients. Beikirch shared in particular his concern for and contact with two who had recently been diagnosed with cancer and another who was battling Parkinson’s disease.

He also spends time with recent recipients, listening to their stories and advising them on issues such as how the award will affect them and their families.

In a world where pride, narcissism and self-centeredness seem to dominate, Beikirch’s example of focus on others, selflessness and serving a purpose higher than his own gratification is a breath of fresh air. His heroism on the battlefield, recognition of the need to live for others, his service in his career and now as an inspirational speaker show how one can live a life of significance.

Beikirch’s story is an inspiring part of our nation’s and our Army’s heritage. It should be known by all who love and serve our nation.