War has always been unpredictable. And given advances in technology, it can now come upon us at speeds unforeseen even in the days of blitzkrieg.

Meir Finkel’s Military Agility: Ensuring Rapid and Effective Transition from Peace to War examines the challenges of a peacetime or security-focused army shifting quickly to kinetic conflict. In addition to the logistical and organizational issues involved, Finkel covers the conceptual changes needed to effectively incorporate new ways and means to fight—challenges that are heightened when decisions need to be made in the midst of hostilities. 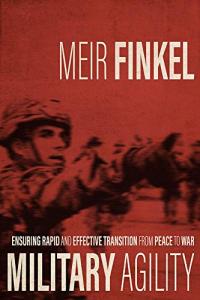 Military Agility is the latest entry in University Press of Kentucky’s Foreign Military Studies series, produced in conjunction with the AUSA Book Program. It uses case studies from the Israel Defense Forces to highlight what needs to be done to improve readiness in the U.S. Army.

The United States has had the luxury of time and space to prepare its forces for the wars it has fought in the 20th and 21st centuries. But as we shift to the possibility of high-intensity conflict with near-peer adversaries—likely to be fought with extremely long-range and hypersonic weapons—our situation will more closely resemble that of Israel’s, which has been surrounded by enemies since its founding.

The U.S. Army has studied Israeli wartime experiences for decades, and the AUSA Book Program has accordingly followed suit with other titles to highlight lessons learned. For example, the Yom Kippur War of 1973, which provided great insights for modern large-scale combat, is featured in several recent titles: Soldier in the Sinai by Maj. Gen. Emanuel Sakal, Inside Israel’s Northern Command by Brig. Gen. Dani Asher, and At the Decisive Point in the Sinai by Gen. Jacob Even and Col. Simcha B. Maoz.

Readers of these titles will be following the old Roman dictum Si vis pacem, para bellum: “If you want peace, prepare for war.”

To order a copy of Military Agility and other AUSA titles, please visit www.ausa.org/books.