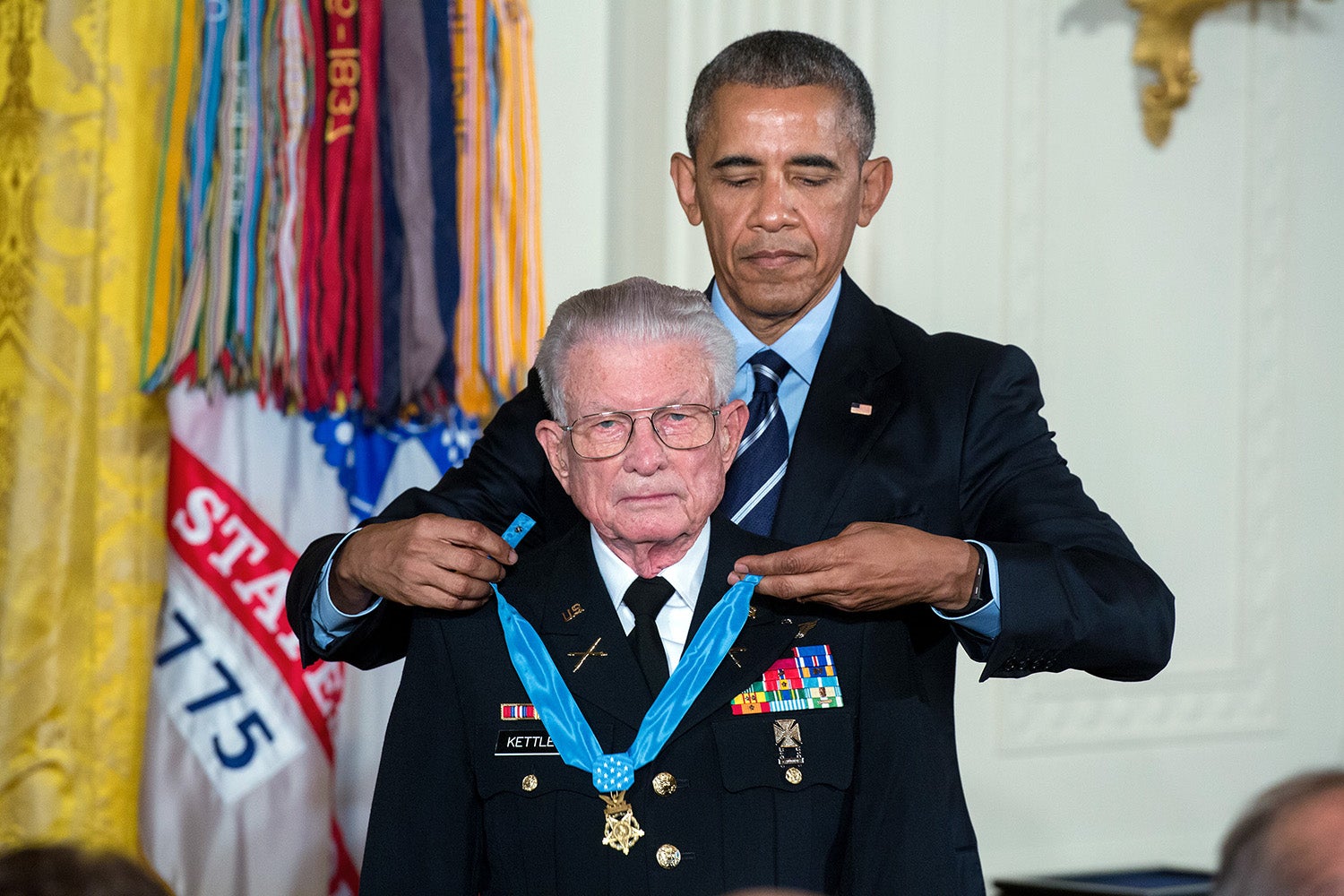 President Barack Obama presents the Medal of Honor to retired Lt. Col. Charles Kettles for conspicuous gallantry in the East Room of the White House.
Photo by Chuck Kennedy

“You couldn’t make this up. It’s like a bad Rambo movie,” Obama said, describing the harrowing exploits of then-Maj. Kettles, on that fateful day, May 15, 1967, in “Chump Valley,” South Vietnam.

As commander of the 176th Aviation Company, Kettles’ mission was to fly in reinforcements and evacuate wounded soldiers of the 101st Airborne Division, who were outgunned and outnumbered by the North Vietnamese in a rural riverbed near Duc Pho. “They needed support fast,” the president said.

Towering above Chump Valley was a 1,500-foot-high hill where the enemy was entrenched in an extensive series of tunnels and bunkers. It was “the ideal spot for an ambush,” Obama said.

Despite the dangers that they all were aware of, Kettles and his fellow company of soldiers took off in their Hueys.

As they approached the landing zone, they met a “solid wall of enemy tracers coming right at them,” Obama said. “None of them had ever seen fire that intense. Soldiers in the helos were hit and killed before they could even leap off.”

Despite the withering fire, Kettles landed his helicopter and kept it there exposed so the wounded could board.

After flying the wounded to safety, Kettles returned to the valley a second time, the president recounted. He dropped off four soldiers and supplies and picked up more wounded.

His Huey was hit. Fuel was pouring out as he flew away. His helicopter was so badly damaged that he couldn’t make it to the field hospital so Kettles found another helicopter and took them to safety.

By now it was near evening. Back in the riverbed, 44 American soldiers were still pinned down.

“The air was thick with gunpowder, the smell of burning metal,” the president described.

“Then they heard a faint sound. As the sun started to set, they saw something rise over the horizon – six American helicopters. One of them said, ‘as beautiful as could be.’” 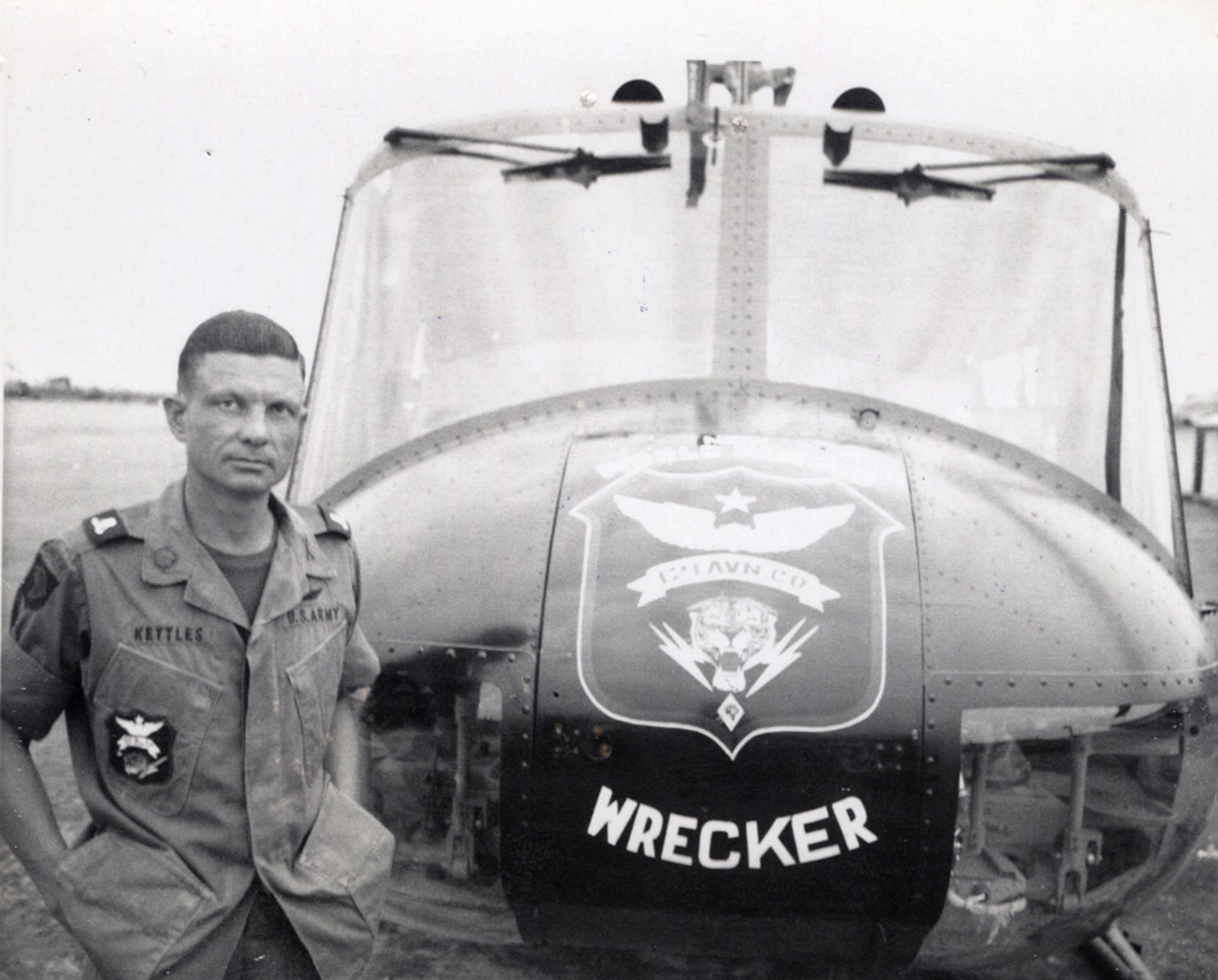 Then-Maj. Charles Kettles stands in front of a 121st Aviation Company, UH-1H helicopter, during his second tour of duty in Vietnam in 1969.

For a third time, Chuck and his unit “headed into that hell on earth,” Obama said.

“Death or injury was all but certain,” a fellow pilot had said. “And a lesser person would not return,” the president related.

Once again, the enemy unloaded everything they had on Kettles as he landed: small arms, automatic weapons, rocket-propelled grenades.

Soldiers ran to the helicopters as they had before. When Kettles was told all were accounted for, he took off.

On the return flight, Kettles received a radio call informing him that eight men had not made it aboard.

“They’d been providing cover for the others,” the president said. They “could only watch as (the helicopters) floated away. ‘We all figured we were done for,’” one later said.

Kettles came to the same conclusion, the commander in chief said conveying his words: “If we’d left them for 10 minutes, they’d become POWs or dead.”

A soldier who was there that day said “Maj. Kettles became our John Wayne,” Obama said, adding his own take: “With all due respect to John Wayne, he couldn’t do what Chuck Kettles did.”

Kettles couldn’t shake from his mind the idea of leaving the eight behind, so “he broke off from formation, took a steep, sharp descending turn back toward the valley, this time with no aerial or artillery support, a lone helicopter heading back in,” Obama said.

“Chuck’s Huey was the only target for the enemy to attack. And they did.”

Tracers lit up the sky once more. “Chuck came in so hot his chopper bounced for several hundred feet before coming to a stop.”

As soon as he landed, a mortar round shattered his windshield. Another hit the main rotor blade. Shrapnel tore through the cockpit and Kettles’ chair. Yet, those eight soldiers sprinted to the Huey through the firestorm.

The president described what happened next: “Chuck’s helo, now badly damaged, was carrying 13 souls and was 600 pounds over the (weight) limit. He said ‘it felt like flying a two-and-a-half-ton truck.’ He couldn’t hover long enough to take off, but the cool customer that he is, he saw his shattered windshield and thought, ‘that’s pretty good air conditioning.’

“The cabin filled with black smoke as Chuck hopped and skipped the helo across the ground to pick up enough speed to take off, ‘like a jack rabbit bouncing across the riverbed.’”

The instant he got airborne, another mortar ripped into the tail and the Huey fishtailed violently. A soldier was tossed from the helicopter, but managed to grab a skid, hanging on as Kettles flew them to safety,” Obama said.

“The Army’s Warrior Ethos is based on a simple principle: A soldier never leaves his comrades behind. Chuck Kettles honored that creed. Not with a single act of heroism, but over and over and over and over. And, because of that heroism, 44 American Soldiers made it out that day,” the commander in chief said.

The most gratifying part of this whole story, “is that Dewey’s name and Roland’s name and the names of 42 other Americans he saved are not etched in the solemn granite wall not far from here that memorializes the fallen in the Vietnam War,” the president remarked.

“To the dozens of American Soldiers that he saved in Vietnam, half a century ago, Chuck is the reason they lived and came home and had children and grandchildren. Entire family trees, made possible by the actions of this one man,” the president concluded.

Kettles, 86, was joined at the ceremony by his wife Anne. They will celebrate their 40th wedding anniversary next March, the president said.

With them were eight of their 10 children and three grandchildren. “It’s the Kettles family reunion in the White House,” the president noted.

Also attending were some of the soldiers Kettles served with that day, including Scheck, Dewey Smith, who was among the last eight soldiers rescued that day, and a number of other soldiers who fought in that battle. Past Medal of Honor recipients attended as well.