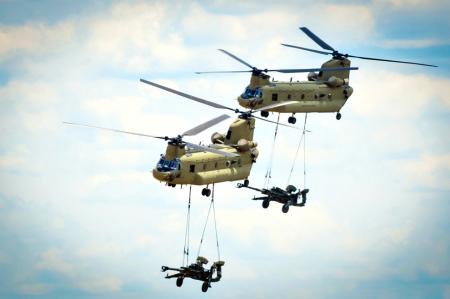 Perkins, commander of the U.S. Army Training and Doctrine Command, spoke at the “Land Forces in the Pacific: Advancing Joint and Multi-National Integration” symposium, sponsored by the Association of the United States Army’s Institute of Land Warfare.

Perkins described MDB as a concept that maximizes utilization of all five domains: air, sea, land, space and cyber, in a joint coalition effort.

For MDB to work, the military needs to do away with domain “hogging,” he said.

Perkins described domain hogging in the following way: When a crisis occurs in a land domain, the Army or Marine Corps is considered the “owner” of that domain and is expected to respond in a traditional manner, perhaps with mortars or howitzers. If a crisis occurs at sea, the Navy is viewed as owning that domain, so a ship or sub-surface solution is applied.

To demonstrate the usefulness of MDB as an alternative to domain hogging, Perkins described a fictitious MDB-type scenario in the Western Pacific.

What the combatants not aware of are the presence of Army howitzers or missile batteries, located on islands in the area, which are armed with anti-ship precision fires.

MDB also provides the option of relying on partner nation capabilities, in addition to those of sister services in the U.S. military.

Royal Australian Army Maj. Gen. Roger Noble, who is on loan to the U.S. Army as the deputy commanding general, U.S. Army Pacific, provided an example of partner nation-based MDB.

In a previous assignment last year, Noble was attached to the 101st Airborne Division, which was assisting the Iraqi army in its drive to push the Islamic State out of Iraq.

During the fighting, the U.S. Army wanted to use its offensive cyber capabilities to perform a mission that is still classified.

The U.S. Army didn’t have the proper authorities and permissions in place to use that capability, however, but Australia and the United Kingdom did. So the Army relied on its partner’s capability in the cyber domain, Noble said.

Perkins added that cyber or space domains, regardless of which service or nation owned those assets, could also be used to shut down the enemy’s naval navigation system or anti-ship missiles.

It doesn’t matter which partner owns the domains; the assets should be available to whoever needs them, he said.

Some partner nation leaders look at the busy slides Perkins uses to explain MDB, and are intimidated by the complexity. They think “ray guns and flying saucers,” Perkins said.

They believe MDB to be complicated and expensive, but Perkins said he tries to reassure partners that they don’t need to be equipped with the most modern hardware to provide MDB assets within a multi-partner force.

For example, a small Pacific nation without a large navy might have a number of small, shallow-water vessels that could contribute to force protection in areas where U.S. and coalition forces are operating.

Or, some small nation with hardly any assets at all might have land located in a strategic area from which land, air and naval power of the coalition forces might be projected. Everyone, he assured, has something to bring to the fight.

Noble described that when he was in Iraq last year, coalition forces utilized MDB even before the concept went by that name. Naval aircraft, launched from ships, delivered precision ground fire as multiple nations and military services were worked in and shared multiple domains.

Perkins said there’s nothing like a war situation to test concepts like MDB and to flesh out problems, such as when one nation’s radios don’t communicate another.

The next best learning environment, he said, is conducting rigorous exercises like the ones U.S. Army Pacific Command does year-round in the Pacific with various partner countries.

“We see multi-domain battle as something to put in place right now,” Perkins noted.

He added that the Pacific region is a perfect place to test out MDB in rigorous exercises because all domains are well-represented there, and there are multiple coalition partners available to bring multiple capabilities.

Perkins said he’s working with Gen. Robert Brown, commander, U.S. Army Pacific, to establish an MDB task force “to try to take stuff we have in the Army now and repurpose it,” he explained.
For example, USARPAC has equipment that could be used in anti-access, area denial.

Perkins added that Brown comes from TRADOC, so he understands MDB and has been an advocate of the concept.

“I’m convinced this is the way to fight, particularly when you don’t have a clear advantage over our adversaries,” he added. “Adversaries are now fielding new weapons in quantities approaching the zombie apocalypse.”