The new director of the Army National Guard started his job at a time when tens of thousands of citizen-soldiers were on duty overseas and at home supporting local authorities with civil disturbances, catastrophic weather, wildfires and a pandemic.

The Army National Guard saw an unprecedented level of activity in the first half of 2020, with soldiers mobilized around the country in historic numbers for complex and constantly evolving missions.

In mid-August, just two weeks into the job, Lt. Gen. Jon Jensen sat behind his desk in Arlington, Virginia, and hoped it wouldn’t be much longer before he could meet more of his staff members, many of whom were still working remotely due to COVID-19. 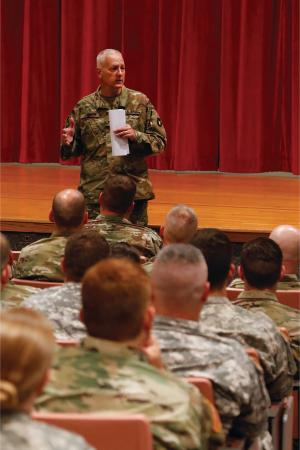 “I’m getting myself straight and understanding all the complexities of this office and all the relationships that come with this office [while] simultaneously jumping right into operations,” said Jensen, who received his third star and was sworn in on Aug. 10 as the 22nd director of the Army National Guard.

A seasoned, combat-tested leader with more than 37 years of experience, including as commanding general of the Minnesota National Guard’s 34th Infantry Division and the past four years as the state’s adjutant general, Jensen took the helm with an understanding that the Army National Guard “is as relevant and necessary across an array of missions than we ever have been, both domestic missions and our overseas missions in support of the National Defense Strategy,” he said.

The operational part of the Guard “isn’t waiting for me to gain my stability. That part of the organization’s moving forward, and it always does,” Jensen said. He pointed out that hurricane season had put even more troops on duty by late summer, as wildfires raged on the West Coast and many troops continued to respond to the COVID-19 emergency.

Croatian leaders give Jensen, second from right, and his staff a tour of an air base in Zadar, Croatia.
(Credit: Air National Guard/Capt. Nathan Wallin)

The Army National Guard’s cybersecurity units at the state and regional levels are also increasingly busy supporting DoD’s cyber defense mission, placing more citizen-soldiers on duty for a mission that continues to expand.

As director of the Army National Guard, Jensen is responsible for nearly 335,000 troops in 50 states, three territories and the District of Columbia. He oversees the programs and policies that involve the Army’s second-largest component.

Jensen was an enlisted soldier first, commissioning as a second lieutenant in 1989 through Officer Candidate School at Fort Benning, Georgia.

At his swearing-in ceremony, Jensen said one of his top priorities as director would be placing people first and developing professional, ethical and caring leaders.

Lt. Gen. Jon Jensen addresses the audience after being sworn in as the new director of the Army National Guard at a Guard facility in Arlington, Virginia.
(Credit: U.S. Army/Sgt. 1st Cass Peter Morrison) 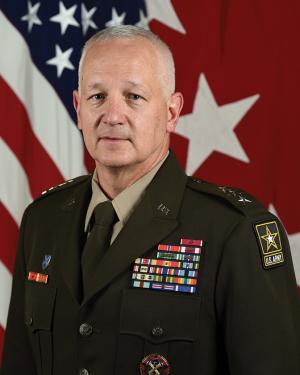 Jensen began the job with a full plate. In his first months on the job, he said, he’s working to ensure that the Army Guard keeps its obligation to the Regular Army by continuing to meet its end strength mission. He’s also facing the challenges of a new fiscal year and the possibility that resources could be tight if funding is uncertain.

Jensen is point man for a reorganization announced this summer by Gen. Daniel Hokanson, Jensen’s predecessor who is now chief of the National Guard Bureau.

Hokanson’s proposal to create eight deployable Army National Guard divisions ready for large-scale combat would be a sweeping reorganization that would give Guard units more training, including at Army combat training centers. Hokanson said this will ease their integration with active-duty Army divisions and joint forces.

The move, which requires the support of Congress and the governors, would give the Army 18 deployable divisions, eight more than it has now, and realign 49 combat and combat support brigades under division headquarters in New York, Virginia, Pennsylvania, Minnesota, Kansas, Indiana, Texas and California.

As the Army returns to more division-centric formations, and as the service seeks to build a force capable of fighting on a future battlefield, the Army National Guard will work to “organize like the Army organizes,” Jensen said.

The first step is to get Guard formations aligned with a division, Jensen said, “creating that relationship, first and foremost, between the division commander and the other adjutants general that they will support in the Army Guard.”

An advantage of the plan, Jensen said, is that it would make it easier for soldiers and officers to move into division-level jobs by creating a formal talent management process supported by the National Guard and the adjutants general.

Currently, a soldier who wants to move from a job in a brigade into one in a division has to find out about the job informally, then move to another state voluntarily, shouldering the cost if hired for the job. Jensen said he’ll work to “open the aperture” so division jobs have more visibility and give soldiers the opportunity to advance and get more experience.

“There’s not a lot of incentive or initiative to move across state boundaries,” Jensen said, using his own career as an example. “I initially enlisted in the Iowa National Guard, and I served over 19 years. When I transitioned to the Minnesota National Guard, that was a voluntary move. Had I not gone to Minnesota, I would have never had an opportunity to serve at a division. The brigade would have been the highest formation I would have ever been able to serve in. We want to expand that.”

Jensen also anticipates a larger role for the National Guard in supporting civil authorities, due in part to the COVID-19 pandemic.

He noted that this is the first time the National Guard has responded to a pandemic that has reached every part of the country. Because troops have adapted quickly to the safety protocols developed early on by the Army and its sister services, Jensen said, they have confidently faced myriad complex missions, including mass civil unrest, natural disasters and the resumption of major training exercises.

The Minnesota National Guard’s 1st Armored Brigade Combat Team, 34th Infantry Division, was the first unit to resume brigade-level collective training at the National Training Center at Fort Irwin, California. The two-week training event took place in mid-July following a strategic pause put in place by the Army as it worked up safety measures against the spread of the virus.

“I can’t predict the future on COVID-19, but it appears we’re going to be involved in this for a while,” Jensen said. The number of hurricanes has increased in recent years, he said, and he suggested that, based on wildfire activity in recent years, response to those types of events would continue to grow for the National Guard as well.

With demands continuing at a steady pace, and Jensen’s belief that they won’t soon abate, he anticipates the National Guard will put more demands on soldiers’ time.

“What I remind young soldiers and officers and NCOs when I am talking to them is the National Guard of two days a month and two weeks a summer hasn’t existed for a long while, and I don’t think it’s coming back anytime in the near future,” Jensen said. “And that’s OK because our soldiers … that extend their enlistments know that that’s what they’re signing up for.”

“The force is healthy,” he said, striking an optimistic note and expressing confidence that the Army National Guard will meet this year’s end strength mission of 336,000.

Still, Jensen said he is concerned about how soldiers and families are holding up under the strain of multiple, back-to-back missions.

“When I look at our communities across the country, we know this COVID-19 has put a lot of stress on everyone: economic stress, emotional stress, physical stress,” he said. “Our forces are no different than that. Our force comes from the community, and we’re not able to package our soldiers all up into a bubble and get them special protection. They are in the community, in every community.”

Borrowing from the “This is My Squad” leadership philosophy put forth by Sgt. Maj. of the Army Michael Grinston, Jensen said he loves the tenet for its power of inclusion, of getting leaders involved in the lives of their soldiers and the health of the force.

“The culture of the Army is to say yes, and we are going to continue to be tasked by our states and by our nation, and we’re going to say yes,” Jensen said.

But the Army and the Guard “need to be always remembering that our soldiers and our families are the most precious thing that we have. Everything we can do to protect them is in our best interests,” he said. “We can get after that with more involvement by our leaders, more inclusion as an organization, taking the time to listen to our soldiers, to what their concerns are and understanding that we need to engage more.”