While we continue to fight our post-9/11 wars, our military leaders are doing all they can to make sure we prepare for the next war. What we aren’t doing as well is sufficiently preparing at the strategic level.

The secretary of defense, chairman of the Joint Chiefs of Staff and chiefs of all the services are working on doctrinal updates, appropriate training focus and focused modernization strategies; experimenting and investing in artificial intelligence (AI) applications and other rapidly advancing technologies; upgrading leader development programs; and improving methodologies associated with personnel and organizational capacity—and much more. To be sure, the way ahead in each category will be the subject of continued debate. Our leaders will adapt and refine initial decisions and react to other developments as they arise. There’s a process for all of this, and it’s being used. That’s important. 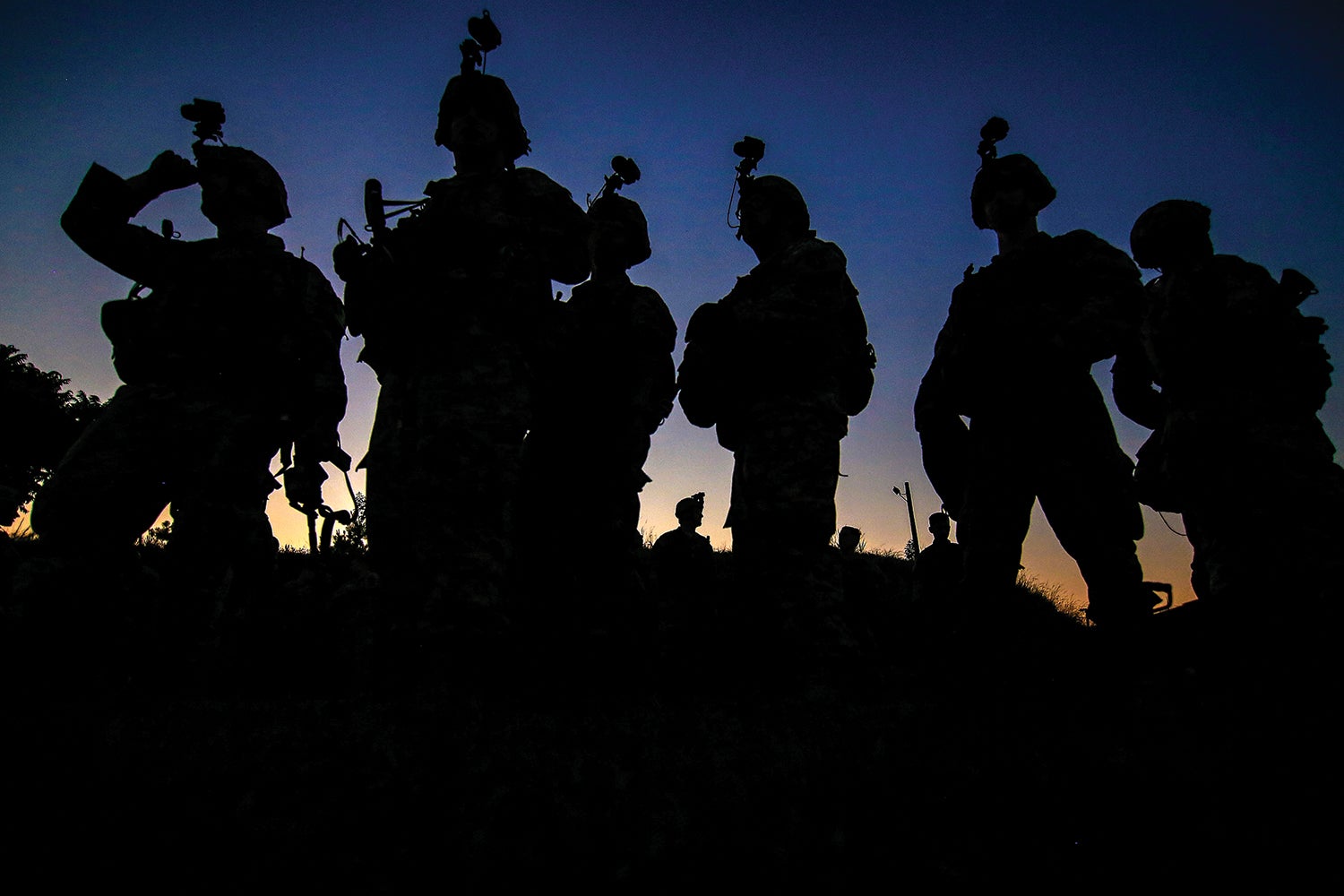 Such is not quite the case for strategic-level preparations our civil and military leaders should make. Four items come to mind: America’s unpreparedness with respect to foreign influence operations, war-waging capacity, the velocity of change and understanding the dual use of military force. Continued weakness in these four areas will put at risk whatever gains DoD, the Joint Staff and service departments make in military preparations, perhaps even nullify them.

Let’s take each in turn.

1. Foreign influence operations. In democracies, the need for and utility of national will, when waging war or using force, comes to no one’s surprise. National will comes in part from sufficient bipartisan support of national political leaders. Such support will never be unanimous; in democracies that’s to be expected. Sufficiency is the only standard. National will also derives from support of the population. Sometimes in our history, national and popular support are congruent; other times not. Both forms of national will are important, though, for they either expand or contract strategic and grand strategic decision space in which our senior civil and military leaders must operate.

An enemy always seeks to break its opponent’s will. Air power was supposed to be able to attack national will directly. The strategic bombing campaigns of World War II and Vietnam were supposed to be examples of this capacity. Reality proved otherwise; neither political nor popular will diminished—not in Britain at the hands of Nazi bombardment, not in Germany in the face of Allied bombing and not in North Vietnam. Strategic bombing definitely had other important uses, but direct erosion of national will was not one of them. Today, however, the information age has provided new tools that do have an effect on both forms of national will.

Called “influence operations,” actions taken in the information sphere—now accelerated by social media and AI-enhanced software—can have a direct effect on the coherence of national political leadership as well as popular support. These actions would have less of an effect in clear cases of aggression, like the Japanese attack on Pearl Harbor or al-Qaida’s attacks on 9/11. But when uses of force are more ambiguous—like Russia’s involvement in Crimea or Ukraine, or China’s actions in the South China Sea—the effect on political leadership can be paralyzing. Popular support can be fragmented as well, leaving political leaders having neither sufficient bipartisan political support nor sufficient popular support for the national security decisions the country faces.

Protecting ourselves from such influence operations, as suggested in Maj. Christopher Telley’s recent Association of the U.S. Army Institute of Land Warfare paper “The Influence Machine: Automated Information Operations as a Strategic Defeat Mechanism,” is as much a matter of preparing for the next war as is modernization and doctrinal updates.

2. War-waging capacity. Too often, Americans equate war with fighting. To be sure, war is fighting, but wars have to be waged as well as fought. In fact, it’s skill at the war-waging level that increases or decreases the probability of achieving long-lasting success from effective warfighting. The famous quip at the start of Col. Harry G. Summers Jr.’s book On Strategy: The Vietnam War in Context proves the point:

“You know you never defeated us on the battlefield,” said the American colonel.
The North Vietnamese colonel pondered this remark a moment. “That may be so,” he replied, “but it is also irrelevant.”

Fighting is what the American military is good at. Waging war, a co-civil and military leader responsibility, remains a weakness.

Senior civil and military leaders have three war-waging responsibilities. First, they must achieve and sustain coherency—that is, aligning war aims with military and nonmilitary strategies, policies and campaigns necessary to increase the probability of achieving the aims set. Second, they must generate and sustain sufficient organizational capacity—across the government, not just within military departments—to translate plans into actions, adapt as the war unfolds and bring the war to a successful end. Third, they must maintain legitimacy by going to war for the right reasons, observing the laws of war in execution and sustaining national will throughout.

3. Velocity of change. If there’s one thing almost everyone agrees on with respect to the future it’s this: The pace of change is accelerating. Contrary to the previous three industrial revolutions, the author of The Fourth Industrial Revolution, Klaus Schwab, reminds readers, “This one is evolving at an exponential rather than linear pace.” He goes on to explain, “The scale and scope of change explain why disruption and innovation feels so acute today.”

Two reasons Schwab discusses the velocity of change are these: to point out that such rapidity is already creating inequality, unfairness and widening gaps within populations and among nations that have security implications; and to show that power continues to shift from state to nonstate actors—a shift that also has security implications.

Bureaucracies, however necessary, are not designed to do “fast” or “new” very well. They are stabilizing factors, whereas velocity of change is destabilizing. Yet bureaucracies are just the organizations necessary for the U.S. to wage war: The national security decision-making apparatus is a set of interrelated bureaucracies. The national departments responsible for carrying out the nonmilitary campaigns necessary to achieve political war aims, and DoD itself—to say nothing of the legislative branch—are huge bureaucracies, none of which are designed to deal well with the pace of linear change, let alone the pace of geometric change that we face.

Bureaucracies can’t go away, and they shouldn’t. But the nation needs a set of capacities that fit the problems and actual conditions it faces. We don’t have that and won’t unless senior civil and military leaders can discover some way to think and experiment a way forward. Warfighting capacities are supported by organizations and processes that recruit soldiers and leaders; pay, develop, promote and assign them; provide them with adequate equipment and weaponry; deploy and sustain them; as well as care for their wounds and their families—all bureaucracies. Improving the nation’s bureaucratic capacity is involved with preparing for the next war as much as modernization and doctrinal updates.

4. Dual use of military force. The Cold War has ended, that everyone realizes. But a replacement for the international order that governed the strategic environment during the Cold War has yet to emerge. For a while, some thought the world would be unipolar with the U.S. as the sole superpower. That hasn’t come to pass. Others think the world will become multipolar. Perhaps, but the jury is still out. For sure, though, the world is amid the slow process not only of replacing the strategic architecture of the Cold War but of replacing the industrial age as the dominant organizational model. That’s what much of the “pushing and shoving” around the world is all about and part of the reason for the return of great-power competition.

The order put in place after World War II, then adapted over the next half-century, is slowly eroding as information-age change accelerates. The kind of order that emerges, as Eliot A. Cohen explains in his latest book The Big Stick: The Limits of Soft Power and the Necessity of Military Force, matters to the U.S. and its allies. Whatever kinds of wars pop up, therefore, will have to be viewed through two lenses—one lens to determine how to resolve the situation, and a second to figure out how to use that resolution to influence the direction of the international order. But the questions are, “What kind of order is the U.S. trying to establish, and what is America’s role in the world?”

The latest National Security Strategy tries to lay out comprehensive answers to these questions, but are the answers sufficiently bipartisan? That question remains to be answered. Trying to provide such an answer absent a threat like the former Soviet Union and Warsaw Pact is difficult, to be sure. But unless we find good enough answers, other nations and non-nation actors that do have an answer from their perspective will work to influence the shape of the international order—and that shape is unlikely to be conducive to American interests.

Improving the nation’s capacity to construct a sufficiently bipartisan vision of the kind of strategic environment conducive to American interests and America’s role in creating that environment is difficult, but that difficulty does not mitigate its importance. It’s at least as important in preparing for the next war as are modernization and doctrinal updates.

Perhaps the underlying and disconcerting issue is this: Who is responsible to initiate and sustain the kind of strategic-level discussions required to prepare for the next war? Of course, with respect to military preparatory actions, the answer is easy. But for the other issues, the answer may well be “too many, therefore no one.” Yet for the nation to be better prepared for the next war—which, given our history of being unable to predict when and against whom we may have to go to war—these kinds of issues need to be studied.

The profession of arms, understood in its widest sense, seems to have a role. One role may be to take up these kinds of “strategic lessons learned” issues as courses of study in senior service colleges, thus preparing the next generation of general and flag officers who will participate in future civil-military discussions. Another might be stimulating a discussion by funding studies of these kinds of issues through the major American schools of international and security studies, thus educating a future generation of civilian security professionals.

A third could be to sponsor, in conjunction with national think tanks, a multiyear set of conferences that might stimulate a discussion of how the U.S. prepares for and wages war that is broader than just military preparations, stimulating a civil-military process of learning.

Any choice is better than none. Ignoring U.S. strategic vulnerabilities won’t help America be ready for the next war.