April 6 marks the 100th anniversary of the U.S. declaration of war on Germany and the start of our country’s involvement in World War I. This was a seismic event for the U.S., the world and the U.S. Army. The United States, long happily isolated in the Western Hemisphere with a few Pacific interests, found itself thrust onto the world stage as a major player. The Army, long a frontier and briefly an imperial constabulary, found itself committed to face modern high-intensity conflict against an experienced adversary. It proved totally unprepared initially, as the road to war had been no sure thing.

By 1914, the Great Powers of Europe were riven by national and imperial rivalries. They had organized themselves into two competing alliances: the Triple Alliance of Germany, Austria-Hungary and Italy; and the Triple Entente of France, Great Britain and Russia. European armies had adopted massive formations of trained conscripts, operational use of railroads and telegraphs, modern weapons delivered by a military industrial base, and centralized general staffs. Their size, and social theories popular at the time, contributed to militarism, an inclination to resolve quarrels by force. 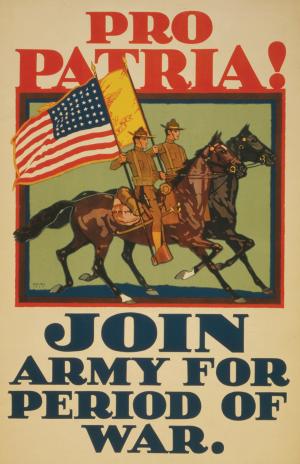 Nations committed themselves to time-sensitive mobilization plans, wherein a speedy deployment could lead to victory and a tardy one to defeat. The assassination of Archduke Franz Ferdinand outraged Austria-Hungary and provoked it to declare war on Russia’s protégé Serbia. One thing led to another and by August 1914, 80 percent of Europe’s citizens were at war with each other over stakes that were not altogether clear.

Most Americans considered all of this to be far away and of little interest to them. Indeed, some evinced a certain smugness that the hypernationalistic Europeans had allowed themselves to stumble into such a conflagration. However, of those in the United States, about 1 in 7 was foreign-born. Since this statistic had prevailed since the 1870s, perhaps half of all Americans had living memory of a foreign-born ancestor. Irish-Americans distrusted Great Britain, and Jewish-Americans from Eastern Europe despised the czar—rendering both groups hostile to assisting the Allies.

German-Americans wanted to remain scrupulously neutral too, albeit for different reasons. Americans with connections to England, France and, after May 1915, Italy understandably favored the Allies. Those from subject ethnicities within Austria-Hungary came to favor the Allies too, hoping an Allied victory would free their homelands.

Beyond ethnic connections, ideology shaped American attitudes toward the war. Those who viewed the British, French and Russians as imperialist powers opined that there was little to distinguish them from German and Austro-Hungarian imperialists. Pacifists thought war itself was evil, and they had a considerable following in religious and secular communities alike. Socialists, a potent force at the time, and many poorer farmers saw the conflict as a rich man’s war that would become a poor man’s fight.

This 1915 newspaper drawing depicts the RMS Lusitania being struck by a disputed second German torpedo.
(Credit: Library of Congress)

Anglophiles such as former President Theodore Roosevelt, on the other hand, saw the war as a bully opportunity to forge an enduring alliance with Great Britain and take a prominent position on the world stage. Internationalist intellectuals such as President Woodrow Wilson were more temperate, wondering if the United States might assist in negotiating a peace while advancing the interests of democracy and liberal capitalism.

Public opinion soon began to tilt against the Germans. They invaded neutral Belgium as the war began, and committed a fistful of atrocities there while quelling real or imagined civil resistance. Britain cut German cable communications with North America while maintaining its own, thus gaining an inside track on how news was reported. German atrocities in Belgium and France got ample coverage, while similar Russian atrocities in East Prussia and Galicia went largely unnoticed.

Germany’s introduction of gas warfare and use of zeppelins to bomb civilians in cities drew notice as well. The Commission for the Relief of Belgium, chaired by future President Herbert Hoover, shipped millions of tons of supplies to feed war-starved Belgians. It also kept the hardships of the German occupation alive in the minds of millions of donors.

Individual Americans found ways into service in British, Canadian, French and other armies. Technically, these volunteers lost their citizenship by swearing allegiance to a foreign power. The French Foreign Legion arguably offered a way around this dilemma, since volunteers swore allegiance to the Legion rather than to France.

Americans swarmed to serve in the Legion, which in turn became a recruiting ground for such famous American-staffed organizations as the Lafayette Escadrille and the Lafayette Flying Corps. Similarly, Americans retained their citizenship while serving as civilians in the American Red Cross or American Field Ambulance Service. Accounts from the front, often poignant or thrilling, endeared Americans at large with the cause committed to by these volunteers.

The most significant single reason Americans went to war was German submarine warfare. Great Britain and Germany both imposed blockades on neutral shipments to the other. The British conducted their blockade in the customary way: intercepting offenders with surface warships, and ensuring the safety of the crews. The Germans, totally outclassed on the surface, relied on submarines, or U-boats. Since submarines were extraordinarily vulnerable even to merchantmen when on the surface, they had strong incentives to strike without warning. The United States and Germany almost went to war after the May 1915 sinking of the ocean liner RMS Lusitania. Of 1,198 who died, 128 were Americans. By September 1915, after a few other less spectacular sinkings, the Germans relented. They promised not to attack passenger ships, and to ensure the safe evacuation of intercepted neutral merchant ships.

Wilson, happy to have remained at peace, doubled down on efforts to broker a negotiated settlement. Neither the Allies nor the Central Powers were interested. In part to avoid provocation and in part to avoid expense, Wilson’s government kept the American armed forces weak. The Army remained pitifully small. The Navy had a respectable number of ships, but these were understaffed and their crews undertrained. Military planning remained dormant. Making points with pacifists and those preferring neutrality, Wilson was re-elected in 1916 employing the campaign slogan, “He kept us out of war.”

An increasing number of Americans became skeptical of neutrality and hostile to military unpreparedness. A “preparedness movement” lobbied hard for increased defense expenditures, universal military training, and summer camps to train future military leaders. Meanwhile, a punitive expedition into Mexico in pursuit of the revolutionary Pancho Villa was successful in dispersing Villa’s forces but demonstrated serious flaws in America’s military posture. In particular, the mobilization of forces beyond the regulars already on the border proved problematic. Some improvements followed.

Ironically, the unpreparedness intended to not provoke the Germans itself became a cause for war. With Russians on the ropes, the Germans saw a path to victory. Assessing the U.S. as weak, they opined unrestricted submarine warfare could bring Great Britain to its knees before America could effectively intervene. They resumed unrestricted submarine warfare on Feb. 1, 1917.

Worse, as the infamous Zimmermann telegram showed, the Germans asked Mexico to join their cause in exchange for the land Mexico had lost to the United States in 1848. Intercepted by the British, the telegram was released to Wilson at the end of February, and then to the American public. The Germans sank five American merchant ships in March. Opposition and misgivings melted away as an increasingly united America became ever more outraged. After Wilson addressed Congress in early April 1917 and asked for the declaration of war, he received it with overwhelming support.

The president characterized the war he had tried so hard to avoid as a war “to end war” and make the world “safe for democracy.” Faced with crisis, the initially reluctant and divided American people came together. One historical lesson lies in the process whereby this dramatic attitude change occurred. Another is the price of unpreparedness. Deterrence matters. Si vis pacem, para bellum: If you want peace, prepare for war.

Brig. Gen. John S. Brown, USA Ret., was chief of military history at the U.S. Army Center of Military History from December 1998 to October 2005. He commanded the 2nd Battalion, 66th Armor, in Iraq and Kuwait during the Gulf War and returned to Kuwait as commander of the 2nd Brigade, 1st Cavalry Division, in 1995. Author of Kevlar Legions: The Transformation of the U.S. Army, 1989–2005, he has a doctorate in history from Indiana University.