It was 1862 and Maj. Gen. William T. Sherman found himself occupying Memphis, Tenn., a hotbed of Southern sentiment. It could not have been easy. A division commander under Maj. Gen. Ulysses S. Grant, Sherman had some time to go before experiencing success and glory. Now he faced the daunting prospect of administering a hostile population in time of war and national rebellion with the existence of the Union at stake. To make matters worse, he was being vilified in the press.

In an earnest letter to a local newspaper editor, Sherman penned these words: “It is enough for the world to know that I live and am a soldier, bound to obey the orders of my superiors, the laws of my country, and to venerate its Constitution; and that, when discretion is given me, I shall exercise it wisely and account to my superiors.”

In this single sentence can be found the hard kernel of our professional ethic. Within it lies guidance for corporals and generals. In its simplicity and clarity, the profession stands revealed. It sets a high but by no means unattainable standard, as relevant today as when Sherman lived. It expresses the hierarchy around which the profession is organized, the ultimate constitutional source of its legitimacy and purpose, and the boundaries within which all military leaders must lead. In garrison and on the battlefield, no leader can do very wrong who embraces and strives to fulfill these simple precepts.

For several decades now, at least since the Vietnam War, we have been told that we as military leaders must navigate murky ethical waters in which every situation is different. To see the world as black and white—or right and wrong—is often portrayed as morally adolescent. This may be so, yet how much of the American story rests on a faithful adherence by generations of leaders to the ethic Sherman so eloquently described? And how painful and dishonorable have been the rare occasions—the My Lais and Hadithas and Abu Ghraibs—when our leaders strayed so far from the professional foundation that Sherman described? 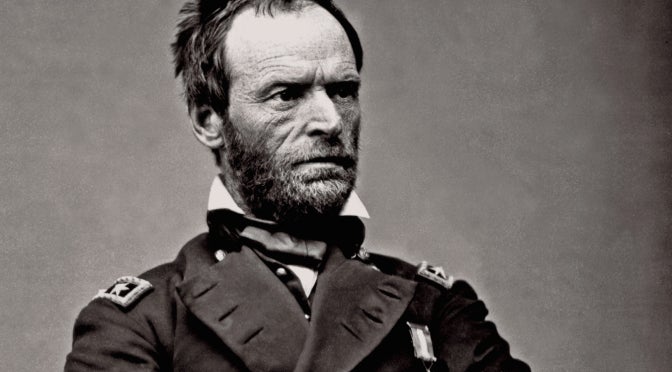 As the years rolled by in my own military career, I found that hardship and experience clarified my understanding of our professional ethic. They did not complicate it. Much of the leadership training we were given in the 1970s and early 1980s was based on situational ethics that obscured more than they revealed. Eventually, I came to see professionalism was not so very hard to grasp. It was there all along, rooted in our history and traditions. Set the example. Dignity and respect. Your word is your bond. Mission first, soldiers always. The harder right, not the easier wrong. Duty. Honor. Country. Move to the sound of the guns.

It’s timeless, if you think about it.

The hard part, I learned, was not knowing what to do; it was doing it. Sometimes, it meant much harder and more difficult work. Sometimes, it could get you in trouble. That’s what leadership is. Making tough decisions under stress is an exacting business. That’s why the pool shrinks the higher you go. Only the best deserve to lead at the top. Our soldiers deserve nothing less.

As a young officer, I once found myself standing in front of the battalion executive officer discussing a maintenance issue. The phone rang, and I could tell in an instant it was the brigade commander on the other end. Apparently, he’d found some candy wrappers and Coke cans in a few trailers in the motor pool, and he was hopping mad. The major, a former NCO with several tours in Vietnam, listened patiently. As the colonel paused for breath, the XO cut in. “Excuse me, sir, but how many whiskies and Kool-Aids are we talking about here?”

The colonel paused for a moment. “Say what?”

“How many dead and wounded?” the major quietly rejoined. “Because unless we’ve got some, you really need to calm down, sir. I’m a little worried about you! Don’t worry about the motor pool. I’ll get right down there and have it squared away in a jiffy.”

The colonel chuckled. The major hung up, and then he turned back to me. “Now, then, young fella, where were we?”

I stood there marveling. I doubt the major remembered the episode even a week later, but I never forgot. Here was a consummate professional at work: calm, confident, respectful and sincere. He would never be a general, knew it, and was comfortable and happy in his station, proudly leading soldiers. In that brief exchange, he taught lessons that would last me a lifetime.

In the last decade, our Army has been challenged by the behavior of some of our leaders and our brand has been tarnished, sullying the sacrifice and patriotism of countless soldiers. From toxic leadership to disrespect of our political leaders to sexual misconduct, the toll on our Army has been high and has overshadowed the faithful service of so many. All of us should do all we can to make our small part of our great Army stronger and better every day. A good place to start is to remind ourselves and each other often: “I live and am a soldier!”

Colonel Richard D. Hooker, Jr., USA, PhD, retired in 2010 after 36 years in uniform. From June 2009 to June 2010 he served as Director, Communications Action Group, CJTF82/ Regional Command(East) in Afghanistan. COL Hooker commanded a parachute brigade in Iraq in 2005–2006, served with the National Security Council from 2006–2008 and became Dean of the NATO Defense College in October 2010.