Constant Contact: How Much Is Too Much During Deployments?

Over the past decade or so, technology—and with it, communication from faraway lands—has changed our lives. Probably no other demographic of people has experienced this change as much as the military. In World War II, telegrams and letters were the lifeline between families back home and soldiers overseas. The postal service sped up slightly as troops were sent to Korea. Now, some soldiers have constant access to the Internet; they can see firsthand what is trending on Twitter and Instagram. With these changes, however, comes this question: How much communication is too much?

From the beginning of their careers, soldiers are cut off from their families. Basic training breaks the constant contact that society is so accustomed to today. Soldiers focus on the most important thing at that point: their job. It is essential that family members understand and respect this. It is equally important for family members to learn that there are times when communication is simply impossible or inappropriate.

Email is Ideal
Deployments require complete concentration on the task at hand. Many military families believe email is an ideal communication tool during these times because it does not interfere with the work of deployed personnel. “With email, I always felt that it was not a burden for Chris to get it—that he would open it and read it only when he had time, “ says Sherri Davenport, an Army spouse of 25 years. “It was easier to share stuff as I thought of it, and not worry that I was interrupting.” 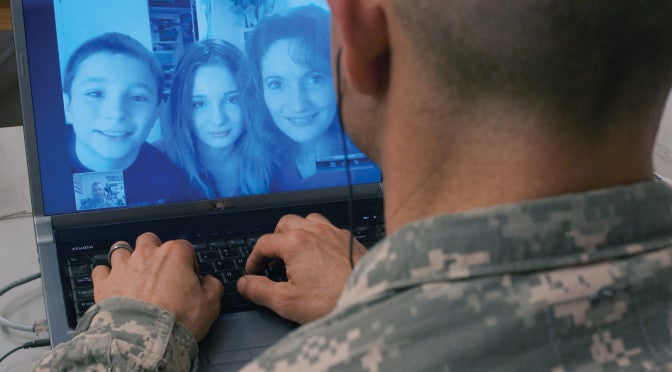 Davenport thinks many families forget this part of the dynamic. “When you got a call only once a week, you rationed that time and analyzed whether to spend it on things that maybe you could address yourself, or waited to see how you felt about something after sleeping on it. Everyone’s emotions are heightened during deployment. Things that are easily laughed off when soldiers are home sometimes grow into a huge issue when they are not. This puts a lot of burden on people on both ends.”

Frequent communication, however, can be a good thing. Elysia Nicolas has been an Army spouse for more than 20 years, and she makes a point to talk with her husband every day of every deployment.

“We make it a priority to speak every day—every day—even if it’s just for a minute,” she says. “In 20 years, the only times we haven’t spoken are when one of us is in transit.”

Now that texting, Skype and FaceTime are available, it’s a lot easier for this couple to be in frequent contact. Nicolas and her husband both have elderly parents; they also had a close family member with a terminal illness. Nicolas says her husband “wants to know what’s happening, and it’s good for my mental health to share the news of the day, be it happy or upsetting, with my best friend. The constant communication also helps our transition each time we are saying hello in person. He knows what’s going on and feels included.”

Nicolas likes to keep her husband in the loop and agrees that email is great for that. “Sometimes, even though we’ve spoken about a particular topic, I email him about it since I think it may be easier for him to focus and reply when he’s not rushed,” she says. 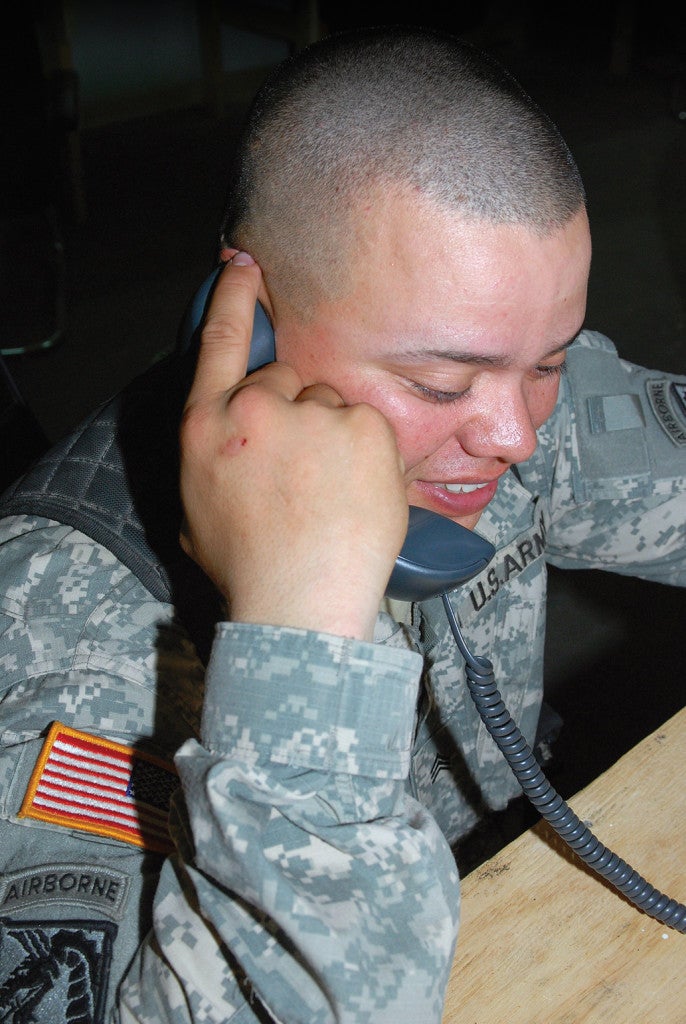 While serving in Iraq, Sgt. Jason Molina talks on the phone with his wife and children in the U.S. (Credit: U.S. Army)

When Is It Too Much?
Army spouse Courtney Cochran experienced a different side of communication during her husband’s deployment in 2014. The couple used FaceTime throughout the deployment at his convenience, giving their young children opportunities to see and talk to daddy frequently. She says it was nice for their kids, “but it was hard for the two of us to have a conversation over FaceTime.”

Toward the end of the deployment, when the Internet was disrupted and infrequent, her husband called home a few times. “I didn’t realize until then how we hadn’t had an actual conversation the whole deployment,” Cochran says. “I think it’s important to be in communication frequently during a deployment, but it’s also difficult—at least, it was for us. Even getting to see him almost every day [through FaceTime], I feel like we lacked actual communication.”

Twenty years ago in basic training, soldiers were lucky to get time to write letters home. Now, some soldiers are allowed to call home weekly. In Advanced Individual Training, cellphones are seen every day. While limited during the duty day, soldiers are immediately calling, texting and checking Facebook as soon as it is permitted—and sometimes, when it isn’t.

During several recent tragedies, communication lockdowns did not take effect soon enough, some people believe. With 24-hour news cycles, Twitter and cellphones, families have the potential to be notified via social media instead of casualty assistance officers. While there is no way to completely eliminate this risk, society’s need for instant communication brings a new realm of possibilities to the notification process, and a new dimension to the phrase “too much, too soon.”

Avoid Distraction
Just because communication is available doesn’t mean it should be used. “On the last four deployments [to Afghanistan and Iraq], although we had cell connections, I would never have called Chris,” Davenport says. “We could never know what was happening on that end and always waited for him to call us.”

The old adage “a distracted soldier is a dead soldier” still rings true. Certainly, a phone call or text could be distracting during a stressful moment and while the soldier may not be in combat at that moment, you can never be 100 percent sure.

This respect for the mission and the job should be adhered to, as Davenport has learned throughout the years. She shares her family’s communication strategy: “By the first time we spoke, he was to have discovered the lay of the land regarding communication so we could have a realistic expectation of how and when we could communicate.”