How Long Can the Threshold of War Hold?

How Long Can the Threshold of War Hold?

The international community is in a period of significant instability—an instability that could lead to a major conventional war, even if such a war does not look like World War II or the World War III we prepared for during the Cold War. A new version of conventional war is not inevitable, but its probability will increase or decrease depending upon how the international community reacts to the emerging security trends and how the U.S. defines its role in the world.

The idea of a major conventional war runs counter to those who hold that the future of war is one of small, asymmetric conflicts fought mostly by special operations forces, paramilitary organizations, mercenaries and high-tech precision munitions, but the future rarely resembles what we expect.

It’s true that since the end of World War II, the U.S. has been involved in a number of conflicts and small wars, and America is still waging the post-9/11 war in Afghanistan, Iraq and across the globe. In the 1990s, these operations were called “military operations other than war.” Before that, they were labeled “small wars.” Now the term “gray zone operations” is in vogue. All intend to describe the same thing: using force below the threshold of conventional war.

Stresses Below and Above

Now, however, the strength of the threshold is weakening from the stresses being created below and above it. If the erosion continues, the risks of crossing the threshold decrease and the probability of crossing it increases.

No analogy is perfect, but this one is illustrative: think of the threshold of conventional war as the Earth’s troposphere. Below it is the Earth’s surface; above it, the stratosphere. What happens above and below affects the troposphere and creates our weather.

The threshold of conventional war from which the U.S. and its allies have benefited was created after World War II. It was the security dimension of what many call the American-led liberal world order. The threshold was not born fully developed. The initial foundations—American global presence, especially in Europe and Japan, NATO, the U.N., and U.S. nuclear capability—morphed and grew stronger over the years of the Cold War. That strength was no accident. Rather, it was the result of purposeful American leadership and actions sustained over time: creating and supporting alliance systems that states wanted to join, building economic and diplomatic structures that benefited all—the weaker allies as well as the stronger, acting with enlightened self-interest rather than raw Hobbesian self-interest, and maintaining bipartisan domestic support as well as international support for the overall system. None of this was unanimous or perfect, but it was sufficient.

American political and military leaders and the public at large understood why they had to create such a world and why it rested on a threshold strong enough to deter conventional war. Their understanding came from the experience of death and destruction of two world wars. They also realized that after World War I, world leaders created the conditions from which the next world war emerged. After World War II, leaders and citizens alike understood at the visceral level that preventing another major conventional war was in their self-interest, and everyone else’s. The costs of prevention may be high, but not nearly as high as the cost of another world war.

Our predecessors knew this, but now that we’re several generations from that visceral experience and the urgency of the Cold War is gone, we seem to have forgotten what it takes, and why it is important, to maintain a strong threshold. Robert Kagan said it succinctly in The Jungle Grows Back: America and Our Imperiled World: “Unfortunately, we tend to take our world for granted.” Kori Schake agrees in America vs. the West: Can the Liberal World Order Be Preserved? “The peoples of Western countries have been so safe for so long, and have so many legal, regulatory, and security guardrails in place, that they have lost consciousness of tragic outcomes directly affecting them.”

The view from below the threshold of war reveals that the threshold’s firmness is not what it once was. The slow-building pressures come from four major sources.

Second, the inability of others— whether individual states, alliances or coalitions—to counter such uses of force also encourages further use. Weakness before aggression prompts more aggression.

New tools, especially in the cyber and disinformation arenas, when combined with covert or clandestine activity and the use of proxies and criminals, is the third pressure eroding the lower side of the threshold of war. These tools and techniques create a “fog of peace” that delays the ability to understand what is going on long enough for an aggressor to achieve initial success and up the cost of counteraction. Cyber and disinformation operations are eroding the strength of the threshold in other ways: both weaken alliances that provide part of the threshold’s strength and both can fracture a society to a point that reduces the possibility of unified state action. Weaker alliances and fragmented societies take longer to make decisions, especially under conditions of cyber- and disinformation-based ambiguity. Again, success using these tools breeds more use.

Fourth, the U.S. itself has weakened the lower end of the threshold of war. The U.S. has proven unable to use force to achieve its strategic aims in the post9/11 wars, demonstrating a weakness in its war-waging capacity. Further, the U.S. has allowed others to achieve technical overmatch in conventional areas that puts its deterrence capacity at risk. American military power—its warfighting capacity—remains significant, but some of the trend lines are going in the wrong direction. U.S. war-waging and warfighting capacity has provided the mortar that first constructed, then sustained the threshold of war since the end of World War II. As this mortar begins to crumble, so does the strength of the threshold. 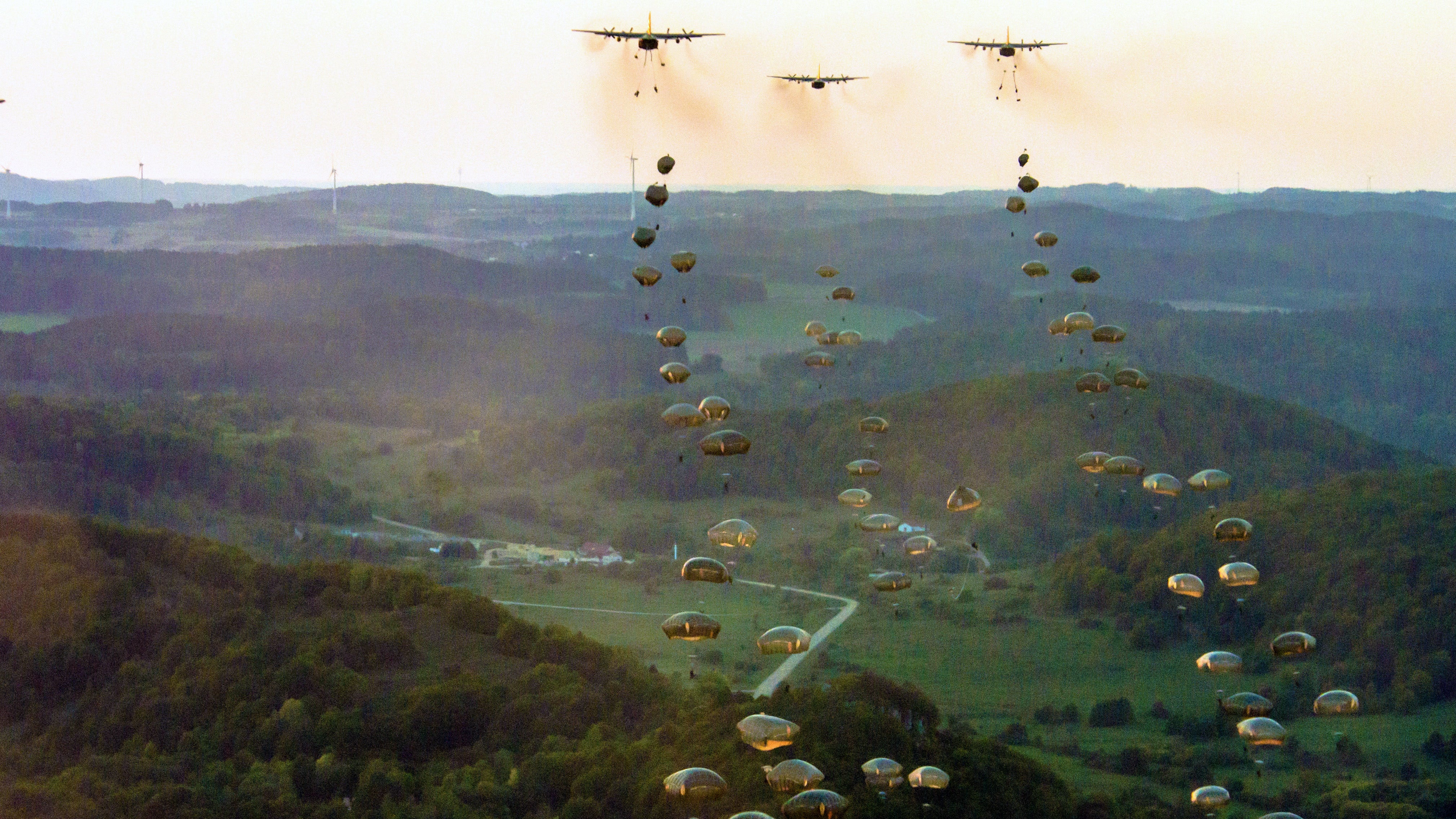 Pressures from above the threshold have also been building slowly and come from several major sources. First, from the expanding and accelerating effects of the information age. Three recent books describe these effects: Klaus Schwab’s The Fourth Industrial Revolution, Peter N. Stearns’ The Industrial Revolution in World History and Richard D’Aveni’s The Pan-Industrial Revolution: How New Manufacturing Titans Will Transform the World.

These authors do not agree on the details, but they agree with the broad outline. Ours will be a future of more instability due to an increase in the pace of changes and an expanding breadth of change. The pace and breadth of change will present difficult challenges to governments, social and economic structures, even to religion and its associated organizational structures. Most likely, neither governments nor international institutions will be able to adapt as quickly as the changes appear.

Stearns categorizes the first phase of industrialization as between 1760 and 1880, and the second phase between 1880 and 1950. The world of 1950 looked nothing like that of 1760. The factory system changed where and how people lived, how families related and how money was made. These changes affected religions, governance, civil society and economies. Citizens of 1950 got their information differently, traveled differently and were educated differently from those of 1760. Demographics shifted as people migrated from farms to cities and from one country to another. Almost every aspect of social, political and economic life changed, as did how wars were fought.

Just as the domestic landscape was reshaped by both periods of industrialization, so too was the international landscape. The American, French, Russian, Mexican and Turk revolutions were fought in these periods, as were civil wars in America, Spain, Russia and China. The War of 1812, the South African War, both world wars and the Korean War were also fought in these periods.

The point is that the unfolding of the first and second periods of industrialization was not peaceful. Each period was a time of significant stress and instability as leaders from every walk of life tried to adjust to the pace and breadth of the changes they were facing.

Schwab calls what the world is going through now “the fourth industrial revolution,” and D’Aveni calls it “the panindustrial revolution.” Regardless of the moniker, what we face is profound social, economic and political systemic change with its associated stresses. The current threshold of war is just one of those systems under significant stress.

The threshold is also under pressure from the effects of climate change, already creating new competitions. Some of the competition concerns new opportunities, such as the natural resources and trade routes that are opening in the face of receding Arctic ice. Other competition concerns vulnerabilities created by shrinking natural resources such as water or shifting agricultural capacity due to temperature and rainfall changes. Food and water scarcity will force migrations, even as leaders try to create new production and distribution capacities. Rising sea levels have already caused some governments to evacuate and relocate whole peoples. These kinds of competitions have caused major wars before. There is no reason to think they won’t again.

“So disorder is likelier than spontaneous order,” according to Schake. “Wars will become more likely, although global conflagrations of the kind unleashed twice during the twentieth century may not be the central concern.”

But if states don’t band together in new alliances, even global conflict becomes possible. Schake’s conclusion is that “a Hobbesian state of nature” may not emerge, “but a more chaotic and less institutionalised order” that feels like “Europe after World War I” may. The probability of crossing the threshold of war in such a future increases in probability.

In Political Order in Changing Societies, Samuel P. Huntington concludes that periods of increased violence and instability are “in large part the product of rapid social change and the rapid mobilization of new groups into politics coupled with the slow development of political institutions”— i.e., the kind of period we are in now.

We should all pause, therefore, before we construct strategies, lay out budget plans and create force structures based upon a future of small, asymmetric conflicts. We won’t be prepared for what we can’t imagine.