A cultural shift being brought on by new standards in physical fitness and tough new rules regarding deployability will strengthen readiness, Sgt. Maj. of the Army Daniel A. Dailey says. People motivated to serve in a professional Army “are going to reach as high as you ask them to,” he asserts.

In his fourth year on the job, the 15th sergeant major of the Army is also making advances in ensuring the Army is recruiting the best cross-section of America’s young men and women, a generation for whom Dailey predicts the shift to a higher standard will be the norm. 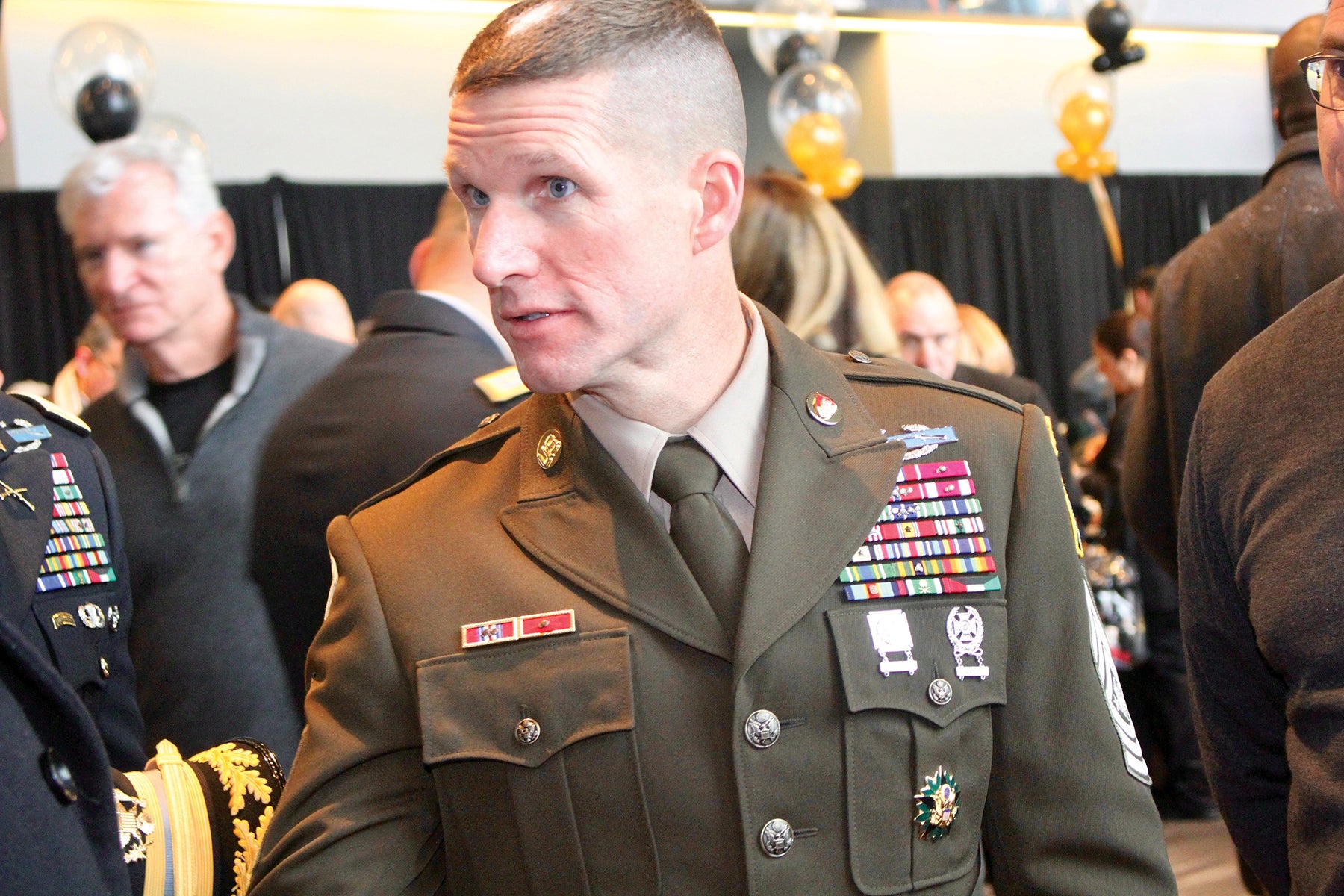 “For the soldier that joins the Army tomorrow morning, that culture will exist and that’s because that’s what the standard will be then. It’s a much higher standard, but we have found that people are going to reach as high as you ask them to,” Dailey said.

Topping the list of approaching changes is a new physical fitness regimen and a test being evaluated across the Army. They are set to be implemented across the force by October 2020, marking the first overhaul in 40 years. Another change is a tough new rule that separates from service soldiers who have been unable to deploy for 12 consecutive months. Announced earlier this year by Defense Secretary Jim Mattis, the policy is aimed at making readiness higher and the frequency of deployments more equitable by keeping units at peak levels of manning.

After more than 17 years of war in an environment of counterinsurgency and counterterrorism, the Army’s leaders are warning that a different, more austere and demanding sort of warfare is coming. Readiness is critical.

While readiness is “at the forefront of everything we do,” Dailey said, he acknowledged that change is risky and comes with resistance. Still, he thinks that “our leadership now has got a true vision for change” and “in the long run, we’re going to be a better organization. We’ll never get there if we don’t start today.”

Invoking his mantra that there is nothing more important a soldier can do every day than physical training, Dailey is pumped about the changes coming to the Army physical fitness regimen and test. Gaining superiority over a dangerous enemy in battle takes more than technology and weapon systems; it takes individual physical and mental prowess, he said.

The new Army Combat Fitness Test (ACFT) is designed to test soldiers by preparing them for the physical demands of combat, regardless of age, sex, body type or MOS. Setting aside the current three-part test that includes running, situps and pushups, the six-part test being evaluated with 40,000 soldiers in the Regular Army, National Guard and Reserve comprises a dead lift, leg tucks, standing power throw, hand-release pushups, a sprint-drag-carry run and a 2-mile run.

Answering skeptics who note that the ACFT will take more time and, unlike the current test, require equipment, Dailey said it’s worth it. He recommends soldiers adopt a new, practical outlook, one that says: “Let’s double the amount of time that we’re going to do the most important thing we do every day and really focus on it.” He also pointed out that over the next year, while the test is being evaluated, decisions will be made about what works and what doesn’t.

“The physical fitness test we had was limited because we limited it. We wanted to be able to do it anywhere, any place and without any equipment, but we always knew that it wasn’t the best assessment of physical capability,” Dailey said.

The more demanding ACFT will also require a different daily training regimen and instruction on how to take the test, one soldiers will not be expected to learn on their own, he said. As the test is assessed over the coming year, simultaneous training will take place with new soldiers in basic and Advanced Individual Training. Master trainers will be retrained, and NCOs and officers in professional military education courses will also be trained.

Contributing to the Army’s strategy for increased readiness is a policy now in force that requires units to begin administrative separation of soldiers who are not deployable for either 12 consecutive months or 12 months during an 18-month span. The DoD policy was formulated for all branches in response to a complaint from the Army that some units were not fully combat-ready because they were carrying soldiers who cannot deploy, usually for medical reasons.

Units were authorized to begin combing the ranks for separation-eligible soldiers as soon as the policy was announced in February. There has been a “slight reduction in nondeployables,” Dailey said, but no definite metrics yet. He suggested the appearance of a lower number of nondeployables is because there’s an understanding of the need for readiness. He also believes soldiers know they must meet a standard if they want to continue to serve.

What he wants to be sure soldiers understand is that, far from signaling a lower standard of care for soldiers who for one reason or another can’t deploy, the policy is intended to raise the bar on the combat-ready status of a unit as a whole.

“It’s about standards. If you’re a soldier in the United States Army, your job is to fight and win when called to do so. If you’re called to do so, you should go and if not, then you should not be a soldier. Period. It has to be that way,” Dailey said. There are exceptions, such as wounded warriors who could take longer to get back into condition, he said. He pledged the Army’s help for soldiers tapped for separation.

“You can’t go anywhere in the Army today and not know that readiness is the No. 1 priority. When called to do so, this Army will be ready to fight and win and everybody in it has to be ready to do that,” Dailey said.

The job of bringing in the next generation of soldiers belongs to the Army’s recruiters, but under the chief of staff of the Army’s “Every Soldier a Recruiter” initiative, they got some extra help over the summer with a host of temporary recruiters. Recruiters saw a boost in the number of new soldiers doing hometown recruiting duty and seasoned NCOs who volunteered for 30-day recruiting duty.

Under the Special Recruiting Assistance Program, which has been largely dormant over the past few years, roughly 3,000 experienced soldiers and NCOs were sent to recruiting stations in every corner of the country to tell the Army story. Augmenting that mission, the Hometown Recruiter Assistance Program sent more new soldiers back to their hometowns for longer periods of time to talk to their peers and share their newly minted enthusiasm for life in uniform and the camaraderie of soldiering.

The recruiting effort has been ratcheted up because authorized end strength is higher, and the Army needs to grow by 4,000 soldiers a year for the next four years.

But Dailey said the next big impact on recruiting will come with the initiative to return the Army uniform to the “pinks and greens” worn by soldiers during World War II.

“I’m not the teller of the future, but if we did that, there’d be an instant impact to recruiting,” said Dailey, who has worn the uniform prototype repeatedly over the past year to public events. He has passionately defended the Army’s efforts to make the change at a time when money is tight.

Soldiers and the Army are “largely unknown by the greater population in America,” he said, asserting that the current Army uniform is partly to blame because, while the uniform has historical value, it doesn’t say “soldier.”

Pointing to his own blue Army Service Uniform, which he likened to a tuxedo or a policeman’s uniform, and the camouflage-pattern Army Combat Uniform worn by soldiers at home and overseas, Dailey said, “This is how [members of the public] identify with the American soldier in the airport and things like that, but that also is how they identify with them being at war. That’s not all we do.”

The iconic look of a soldier in a sepia-toned photograph, lugging his duffel back from the war in 1945, Dailey said, is what people will identify with when they see soldiers walking around in pinks and greens. He suggested that would build nationalism and promote today’s generation as the warriors they are.

“I have soldiers with 10 years’ combat experience,” Dailey said, noting that World War II was a much shorter conflict, but one in which the nation was invested. “The uniform is a small measure, but it will have a huge impact on the American public.”