Tristan Wyatt knew immediately that he had been hit. He was in Fallujah, Iraq, in the summer of 2003. The 19-year-old combat engineer was on a reconnaissance patrol with the 3rd Armored Cavalry Regiment in the back of a lightly armored M113 armored personnel carrier. The squad began taking fire and peeled off the road in an attempt to flank the shooters. The move landed them squarely in the middle of an ambush. The enemy had five firing positions set up, all of them directed at Wyatt and his squad.

Wyatt felt the impact before he saw it and, thinking he had taken shrapnel from a nearby mortar or grenade, continued firing his M240 machine gun. Then the dizziness set in. He stumbled, trying to steady himself, and fell backwards into the vehicle.

A hellish sight awaited him.

“It had been a light antitank rocket,” Wyatt said. The round had failed to detonate, but it still managed to penetrate the thin metal skin of the M113. “There was a golf-ball-sized hole in the door. It literally went in one side and out the other.”

It also struck Wyatt in his right leg, severing it above the knee. His two squad mates suffered similar injuries. “The inside of the APC [armored personnel carrier] looked like a butcher house. There were three limbs on the floor and an inch of blood,” he said.

The trio, aided by a medic and three squad mates, managed to stay alive long enough for a medevac to take them to Baghdad. What came next for Wyatt were more than 10 surgeries and a year and a half of rehabilitation, not to mention the realization that his life had forever changed.

“Traumatic injuries aren’t the easiest thing when it comes to prosthetics,” said Wyatt, who is now the chief of prosthetics at the San Diego Department of Veterans Affairs Healthcare System. “There’s a lot of scar tissue that makes the fit difficult, and when you’re young and you want to get out of bed and go balls to the wall, it’s tough when you can’t.”

In partnership with the Department of Veterans Affairs, prosthetics manufacturer WillowWood has been developing and testing new socket technology to improve the fit and comfort of lower-limb prostheses. (Credit: WillowWood)

Wyatt joined more than 1,000 Iraq and Afghanistan veterans with traumatic limb loss. With up to 6 percent of wounded Iraq and Afghanistan veterans having experienced limb loss—in most cases, lower limbs—along with an aging veteran population suffering the effects of diabetes, the number of veterans seeking VA care for prosthetics, sensory aids and related services has increased by more than 70 percent since 2000. While most of those seeking prosthetic-related care are older veterans with diabetes, the demand for prostheses that allow wearers to remain active are at an all-time high, particularly among younger veterans.

Wyatt eventually moved to San Diego, leaving the East Coast’s hot summer weather. Even now, 10 years later in the temperate Northern California climate, Wyatt said as the day goes on and he begins to sweat, the seal between his prosthetic and his leg becomes lubricated, causing the limb to slip. “Now they have all these power knees and computer knees, but if it doesn’t fit well, then it’s garbage,” Wyatt said. “It’s like putting bicycle tires on a Ferrari.”

Bicycle tires were not what the VA’s Bill Jones, a certified prosthetist and chief of prosthetics and sensory aids at the Louis Stokes Cleveland VA Medical Center, had in mind when he reached out to WillowWood, an Ohio-based prosthetics maker. Backed by $3.7 million in VA research funds, he partnered with WillowWood and wound experts at Ohio State University to build, if not a better prosthesis, at least a better fitting one.

In addition to dealing with issues of prosthetic heat, comfort and balance, people with transfemoral (above-knee) amputations face the added struggle of finding a prosthesis that fits securely. “With a below-the-knee amputation, you can attach the prosthesis to the knee and thigh above it. You have that additional room,” said Jim Colvin, director of research and development at WillowWood. “With an above-the-knee amputation, you have limits to how far you can go up the limb.”

From a user’s perspective, Wyatt confirmed that comfort and fit are crucial. “You want to go outside and engage, but if the limb doesn’t fit right—or if it’s uncomfortable—then it gets depressing. You can’t wear it for long, and it affects the geometry of your body. If you have a bad fit, that’s all you can think about your entire day.”

WillowWood, Ohio State University and the VA recently conducted a study that not only attempted to vacuum-pressurize above-the-knee prostheses to keep them secure but also tested a special silicone liner to keep the residual limb cool. Twenty participants enrolled in the study. Each went to WillowWood to be fitted into a special prosthesis equipped with sensors that track everything from oxygen levels in the limb to circulation and skin mechanics.

“We vacuum-seal the socket and pump out all the remaining air,” Colvin said. “That is a very effective way of suspending it. Another goal was to improve comfort, so we’ve developed technology to make the polymers in the liners able to absorb heat from the limb. If we can keep them cooler and better-fitting, users will wear them longer and have more confidence to go out and engage in the kinds of activities they want to without worrying about the prosthesis holding them back.” 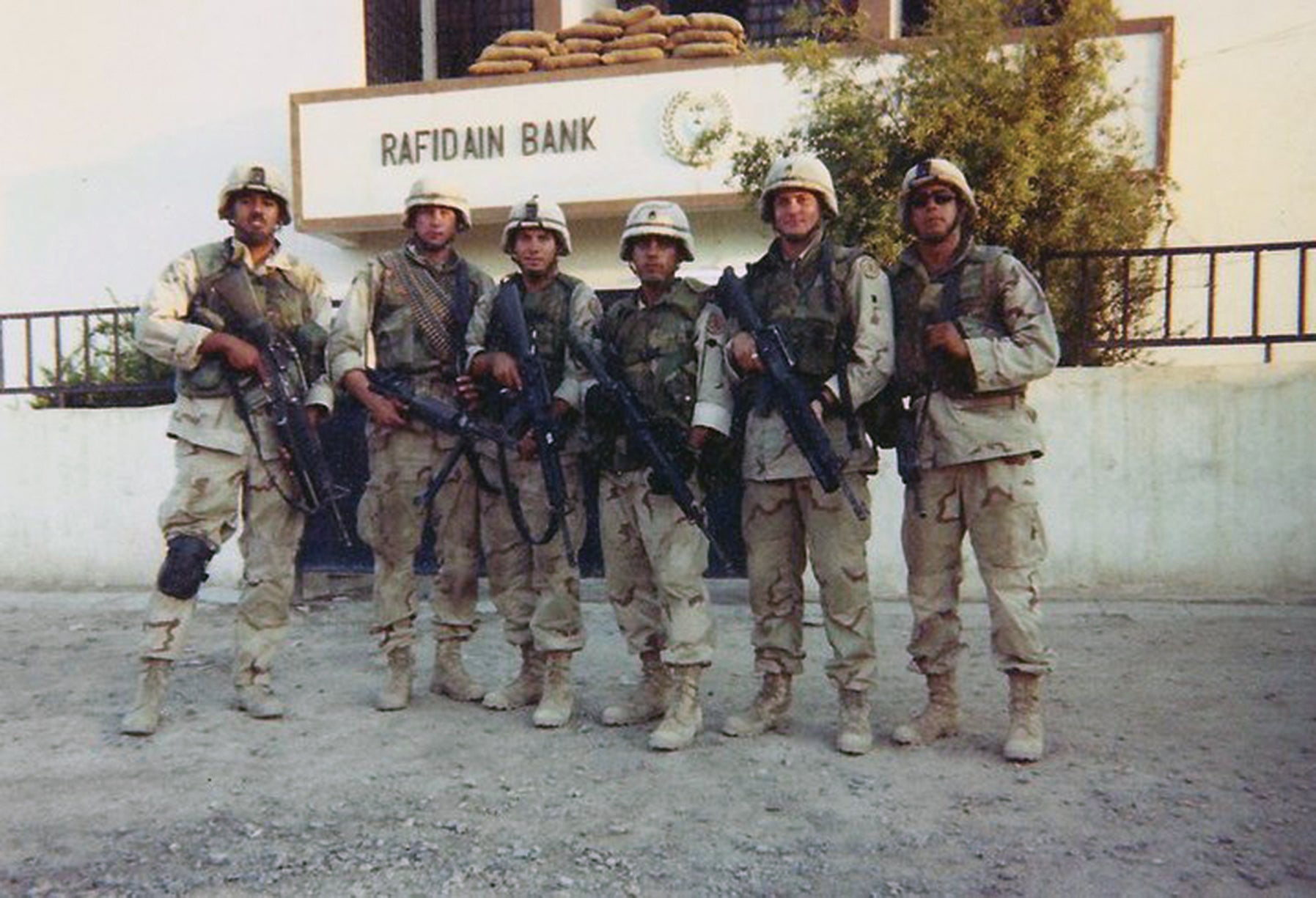 Tristan Wyatt, second from left, with his squad in Iraq, later lost his right leg to an antitank rocket; he now works with prosthetics. (Credit: Tristan Wyatt)

Back on the Job

It was the vacuum technology that first interested 38-year-old John Jones, an electrician in nearby Cincinnati. The married father of three lost his leg in a firearm accident in 2007.

“It was definitely scary,” Jones said. “There wasn’t a lot of information out there. You see below-the-knee amputees all the time, running marathons and dancing with the stars. For those of us with above-the-knee amputations, it’s a little more complicated.”

“I was the man of the house,” Jones continued. “It wasn’t long before my wife would come home to find me out on crutches trying to mow the lawn. My children were all little. There were things I wanted to do—things I needed to do—and I knew I didn’t want to spend my life in a wheelchair.”

Like Wyatt, Jones used the injury as an opportunity to set off in a new direction. Rather than return to his old job, he started his own electrical company with his brother and a lifelong friend, but returning to work wasn’t easy.

In the hot weather, Jones experienced problems similar to what Wyatt went through. “In the summer, it was miserable,” Jones said. “Sweat gets between the skin and the liner and lubricates it. The liner comes off. The prosthesis slips. Not to mention that it’s already a tight fit, and now the [sweat] is taking up the space.”

For more than a year, Jones did what so many amputees do: He endured. Then, after hearing about WillowWood, he signed up.

Dr. Glenn Klute, a research scientist with the VA’s Rehabilitation Research and Development Center of Excellence for Limb Loss Prevention and Prosthetic Engineering in Seattle, compares wearing a prosthetic to having on a wetsuit. “It’s essentially a rubber suit around the limb that traps heat and is impermeable to water, so the perspiration just stays inside the limb.” 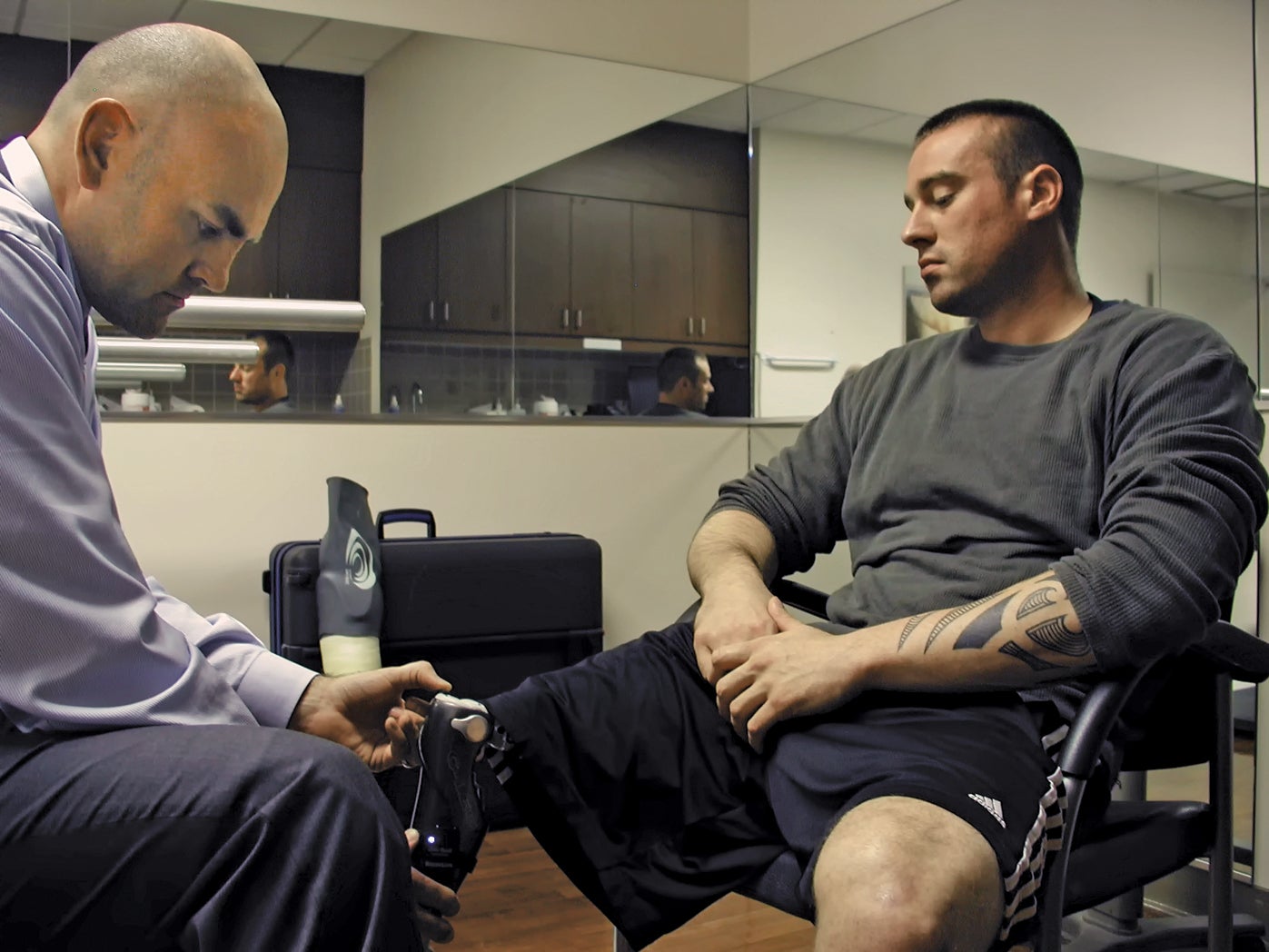 The goal of the improved socket, according to Bill Jones, is to get people back to what they were doing before and to limit the need to readjust the prosthesis in the middle of the day. “Our Iraq and Afghanistan veterans are young, and they’re accustomed to being active,” he said. “If you can get that negative pressure that suspends the limb, that’ll cut the need for high trim lines on the prosthetic. It’ll make it more comfortable for the veteran. It’ll provide more range of motion and better security. Most above-the-knee amputees wear them for about six to eight hours per day. We’re trying to increase that to 10-plus per day. Those extra few hours and that added comfort are integral to getting people back to work.”

WillowWood expects to complete its analysis of the study results this fall and publish them shortly thereafter. They have made the rounds at national and international prosthetics meetings, and, according to Colvin, the preliminary results are already leading to improvements in socket design nationwide.

As for the VA, the new system will be fitted to five Cleveland-area veterans in July for a month of testing before being fielded to a larger group of veterans. The results of those tests will be shared nationally with other VA medical centers. “This is going to be a game changer for above-the-knee prosthetics,” Jones said.

Klute couldn’t agree more: “In the last few years, there have been a lot of advancement[s] in prosthetics, and much of it has been very ‘sexy,’ like robotics, computer-powered joints and neural interfacing. But one of the most challenging steps is actually attaching the prosthetic to the individual and ensuring the device is comfortable. VA is looking at everything from osseointegration [securing a prosthetic device directly into the residual bone] to what amounts to tiny air conditioners to keep the limb cool, all in the name of comfort.

“If you’re comfortable, then you can go to church on Sunday, go grocery shopping and go to work. You don’t have to rely on someone else to care for you, and that’s a good thing. And not just from a cost perspective—these are people we’re talking about, and we’re doing everything we can to help them in their daily lives,” Klute said.

Whether the new study-tested design is a success remains to be seen, but count John Jones, who purchased a working farm after his injury, as a believer.

“I bicycle hundreds of miles per week. In the winter I have to chop wood, and I have a quarter-mile-long driveway to snow-plow. … I don’t feel crippled and I don’t feel handicapped.

“When you get to the point where you’re calling your prosthetic your ‘leg’ instead of ‘that thing’ or ‘that prosthetic,’ then you’ve crossed a threshold. It’s become a part of you and things will get better.”