First, a quick update on the AUSA resolutions, and then I will explain the chart accompanying this month’s column.

The AUSA Resolutions Committee completed its work at the end of February and submitted the draft of the 2017 resolutions to our president and CEO, retired Gen. Carter Ham.

When General Ham received the draft, he recognized that this year is unusual because the new administration won’t submit its full budget request until late spring or early summer, instead of February, so we have some additional time.

He decided to send the draft resolutions out to the chapter, state and region presidents to get member feedback.

Because our Army is in a resource-constrained environment, there are limits and trade-offs in the budget.

In recognition of this fact, General Ham asked our volunteer leaders to help prioritize which resolutions are the most important to our membership.

At the end of March, AUSA will consolidate the feedback and revise the resolutions, and then send them back to the chapters for their vote. Please make sure your chapter participates.

Now, sports fans, on to the chart. 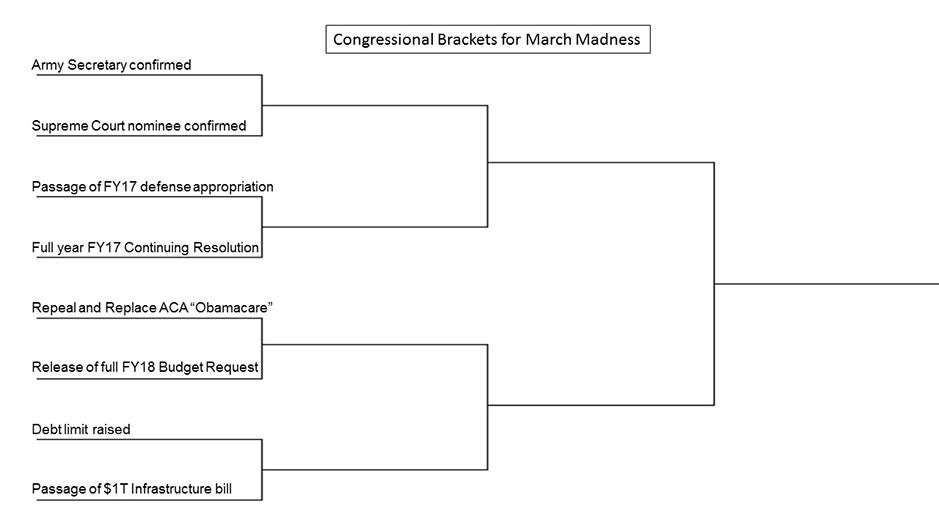 The bracket you see is like the “March Madness” basketball bracket many of you may have filled out.

However, instead of basketball teams, this one has eight of the contentious issues facing Congress this spring. Your job is to use the brackets to sort out what issues will be resolved first.

Although it says “March Madness,” it will probably take longer for this bracket to play out, but it will be no less exciting to watch. Make your best guess on which issue emerges first in each match-up, and advance it to the next bracket.

Then, make your call on the new pair of issues that results. Repeat until one issue emerges victorious at the last bracket.

The first match pits a yet-to-be-named individual as the potential Army secretary against Neil Gorsuch, the nominee for the Supreme Court. Talk about an unknown making it to the finals!

This competition will start to play out in various committees in the Senate, with the final vote on the Senate floor. Will Chuck Grassley’s Judiciary Committee work faster than John McCain’s Armed Services Committee? Hold onto your seats.

The second match-up is a little different, as the issues are related.

While we are nearly halfway through fiscal year (FY) 17, there has only been one appropriations bill passed and signed into law (MILCON/VA).

AUSA is rooting for passage of the bill.

The third match on the bracket includes a wild card, which is the repeal and replacement of the Affordable Care Act (ACA), facing off with the ever-unpredictable timing of when the president will submit his full FY18 budget request to the Congress.

While the House of Representatives started moving quickly on ACA repeal, its momentum in the playoffs has wavered. The opponent issue, the budget submission, was due the first week in February, but new presidents routinely delay their first budget so they can put their mark on it.

Which one will happen first? Fill out your bracket with your best guess.

Finally, the last two issue match-ups are the debt limit and the infrastructure bill.

Congress is discussing both, but who knows which one will emerge first in a bill that passes both the House and the Senate. On March 15, the suspense on the debt limit expired, and so now the Treasury Department will take “extraordinary measures” until Congress raises the limit. If Congress doesn’t raise the limit before Treasury runs out of extraordinary measures, the country defaults.

Meanwhile, the president made a campaign promise to put $1 trillion dollars into repairing the nation’s infrastructure. Congress must figure out where that money will come from, and then what states will benefit. Should be an exciting match.

Given that these eight issues aren’t the only ones currently moving through and/or gridlocking in Congress, it is easy to see that the “Congressional March Madness” will probably last well into the fall. Good luck with your predictions.