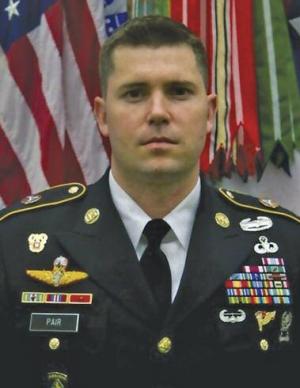 Master Sgt. Chris Pair proved it is not just being in the right place at the right time that makes a difference, but also having the right training. The 33-year-old telecommunications operations chief helped save the lives of two teenagers who were involved in a February 15 truck accident in Sumter, S.C., using his Army first-responder and combat lifesaver training.

The Camden, S.C., resident did not see the accident on Highway 261, but he showed up shortly after the pickup truck had flipped over and landed upside down in a ditch.

“My first reaction when I saw the car, because of how mangled it was, was [to think] I was going to roll up on a fatality. It was that bad,” Pair said. “There were about 14 people gathered around just watching these two young men bleed out.” Passing by without stopping never crossed his mind, although he was worried about what his 8-year-old son might see. “I had him stay in the car because of the amount of blood. I did not want him seeing any of that.”

Pair said the truck’s windshield was broken, and he kicked the rest of it out so he could get the men away from the vehicle. Nobody in the crowd offered to help, he said. “I was on my own.”

One of the men was bleeding from the mouth and eye. The other had a broken arm. “I could see what looked like a compound fracture on his right arm, so I made a makeshift sling to immobilize the fracture,” he said.

He asked for help from the bystanders. “I started to order people to do what I needed,” he said, such as applying pressure to wounds, getting fresh water and getting things from the emergency medical bag he carried in his vehicle. “I had one person out of the 14 who was helping me,” Pair said.

As he stabilized the victims, one of whom displayed signs of shock, paramedics and the South Carolina Highway Patrol arrived to take over. Pair said he briefed them on the medical treatment he had provided and his observations, and then he stepped back as they took over. “I told them what I did, what I saw,” he said.

“I’m just glad I was in the right place at the right time with the medical knowledge and leadership skills that the Army taught me,” he said. He has used his emergency medical training in combat to treat gunshot wounds, but this was the first time he used his training to bust out a windshield or treat vehicle accident victims. “It feels good to be able to help out and know that I was able to make a difference in those young men’s lives that day.”