Cyber Electromagnetic Activities (CEMA) support is fundamentally about making the Army more lethal, both for current operations and in planning for the future – provided it can be effectively integrated and utilized by commanders. 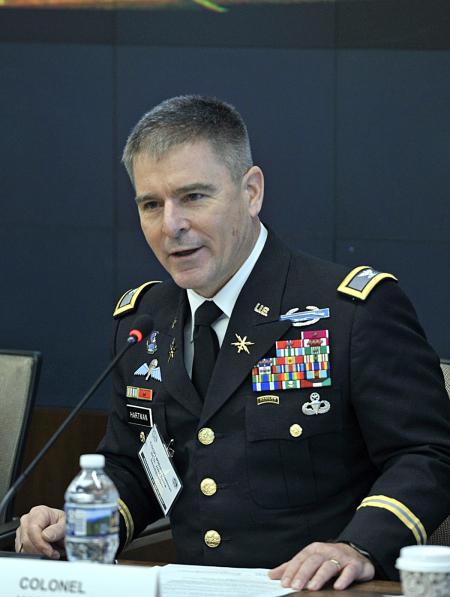 Over the last two years, the Army has focused on providing offensive cyber capabilities to combatant commanders, Hartman said, but a number of shortfalls have been identified.

“First, it was much harder to accomplish this in the operational environment than to design a PowerPoint slide,” he said. Cyberspace operations must be able to function in spite of adverse weather, extreme heat or cold, or other environmental difficulties.

Cyber operators must also be able to communicate their capabilities in language that commanders can understand. “You have to be able to integrate this into [the commander’s] operational process” to be effective, Hartman said.

“We’ve supported units to include light infantry, airborne, armor and Stryker brigade combat teams – each is different, and we have to figure out how to integrate with them,” Hartman said.

The Army’s focus has changed from solely offensive cyber operations to a more holistic combination of offense/defense, electronic warfare and information operations, he said, adding, “When you hear Army Cyber talk about where we’re going, it’s the integration of both offense and defense to enable maneuver commanders to accomplish the mission.”

“Having a weak password, for example, would be similar to that guard falling asleep on duty,” he said.

Commanders must be aware of the critical cyber assets and information so they can plan to protect them, Feigh said adding that without that knowledge, “priorities will not be in the right locations.”

On the modern battlefield, cyber capabilities must be leveraged to manage confusion and add to control.

Ryan said that as a commander, he struggled to find the proper place for cyber in mission command.

“Cyber is awesome, but cyber by itself isn’t,” he said, stressing that cyber enablers must be given a key role in planning and decision-making processes to be effective.