Confronted with the task of filling its ranks again after a period of downsizing, the Army National Guard is poised to make gains by next summer. It will be bolstered by a new recruiting plan and the confidence of knowing that through the “crucible of combat,” the Guard is more integrated than ever with the Total Army.

Describing his soldiers as “full participants” in the Total Army, Army National Guard Director Lt. Gen. Timothy J. Kadavy says the Guard is “integrated in a way that we have not been, not just for mobilizations and deployments, but in all aspects of the United States Army.” 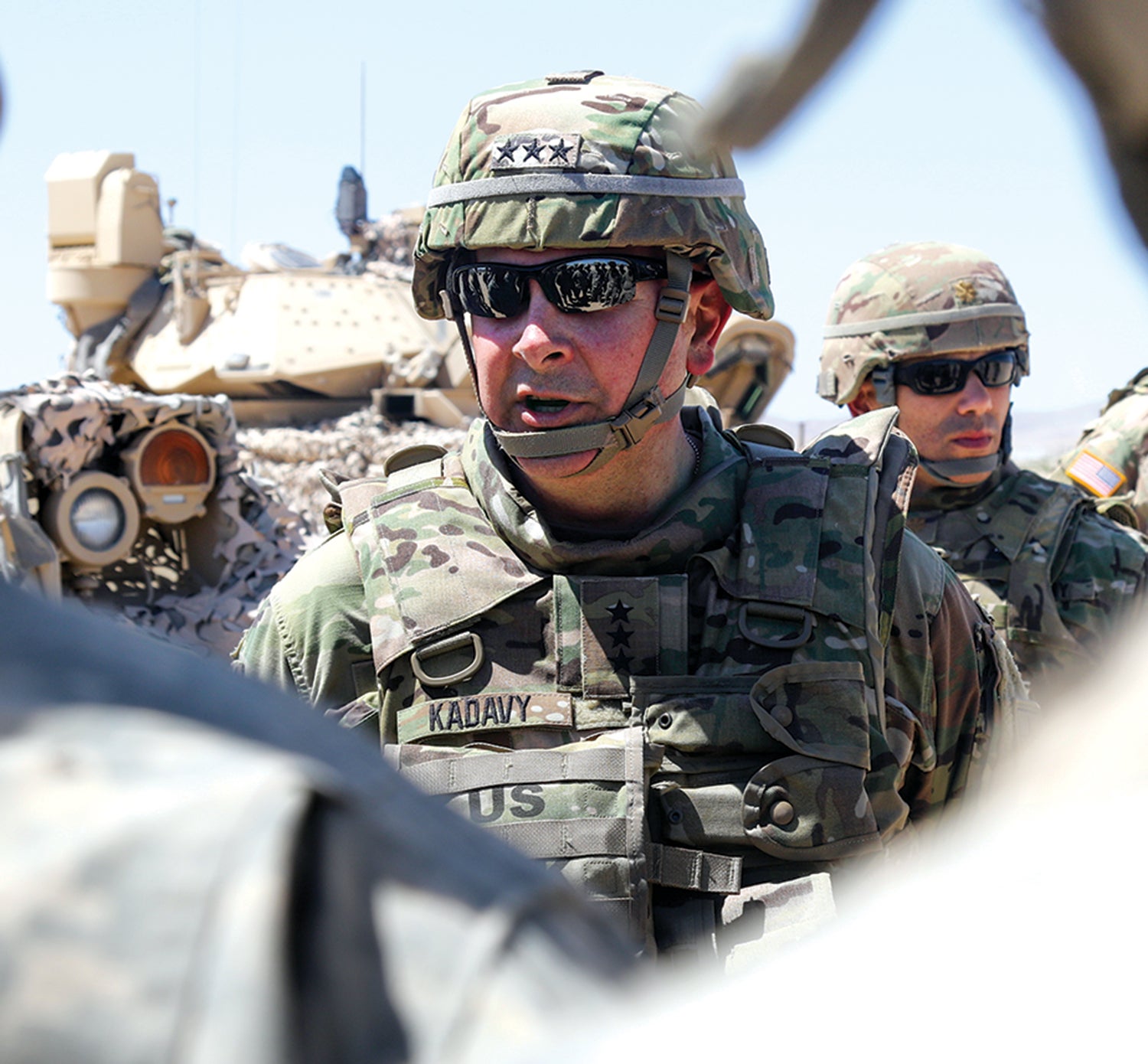 For members of the Guard who were called into action following 9/11, the memory is still alive of disparate levels of readiness, substandard equipment and a relationship with the Regular Army that was disjointed at best. But Kadavy said those days are long gone. Instead, over time and within the bonds that were developed “through the crucible of combat of the last 15, 16 years,” he said, the Army National Guard is “building upon that relationship—an Army that fought together—to be truly one Army going forward.”

That Army fought together overseas for years and today faces a common challenge at home—reversing a long-declining end strength that came about over several years of budgetary uncertainty. While each component is scouring the country for new soldiers, Kadavy maintains that their efforts are complementary, even though they are recruiting from the same pool of people.

“The Army is looking for those that want to go and serve 365 days a year for however long; our newest recruits are usually high school graduates that are heading off to college,” Kadavy said, asserting that the top reason young Americans join the Guard “is because they want to serve their nation and their state, and you can do both in the National Guard.”

Still, even with a firm understanding of the types of young men and women who would be likely to join, Kadavy acknowledged that the Army National Guard will fall short of its fiscal 2018 recruiting mission of about 45,000 by Sept. 30. Instead, he predicted the Guard would end the year about 10,000 recruits short of that goal.

The Army National Guard was 358,000 soldiers strong when Congress imposed the Budget Control Act in 2011. In the ensuing years, with increasingly strained resources, end strength began to slide. The number of soldiers went down to 352,000, then slid by another 2,000 and was on its way toward a number below 335,000 when Congress authorized the Guard to remain at 343,000, Kadavy said. Retention stayed strong, but the recruiting model slimmed down alongside end strength. The challenge has been to turn that around.

Kadavy said there’s a plan and gave his assurance that “we’ve already taken action. It could have been much worse if we hadn’t moved out as quickly as we did,” he said, pointing to the scramble that began during the last fiscal year to reinvigorate discontinued recruiting mechanisms. “I think in 2019 is where you’ll see all of the efforts come together, and we will turn the corner.”

Kadavy’s plan to increase end strength is based on an authorized increase in the number of recruiters, recruiting and retention bonuses for in-demand MOSs, and an initiative to launch a national-level marketing program to refresh the Army National Guard story for a new generation. First on the agenda was re-resourcing the recruiting battalions in the 50 states, three territories and the District of Columbia where recruiting missions are provided for based on the strength and structure of each.

Until about a year ago, the Guard’s recruiting force was down to 2,800 from a high of 3,900 recruiters on duty in the days when the Guard was at an end strength of 358,000. That meant a drawdown of 1,100 recruiters who were placed in other full-time positions in support of the force. To help meet the current end-strength mission of 343,500, the Army National Guard has added 440 recruiters who are either on duty now or gearing up for the mission.

During the period when the Army National Guard was downsizing, Kadavy said, retention was exceptionally strong and still is. But money that has been reallocated and reprioritized for recruiting bonuses has also been authorized for retention dollars where needed. Bonuses of up to $20,000 were provided to states to recruit for their top 10 vacancies, usually high-density MOSs such as infantry. But the states can use the money to recruit low-density, high-demand MOSs, such as signal or military intelligence.

A potential influencer in recruiting is the Army National Guard’s stateside mission of mobilizing in support of disaster relief and humanitarian assistance. Portrayed in real time across the country and the world, the home-state missions render unforgettable images of soldiers helping civil authorities and handling the worst moments in residents’ lives.

Kadavy could not say whether those images translate directly into an increase in new recruits, but believes they contribute to telling the National Guard story. “For some years, we have not really had a robust, some will say not at all, national-level marketing program that has been out there telling America who the Army National Guard is,” Kadavy said.

A campaign being developed with the help of the Army Marketing Research Group aims to distinguish the Army National Guard from the U.S. Army Reserve and the Regular Army, and to highlight incentives like tuition assistance and the GI Bill.

In fiscal 2018, the Guard mobilized and deployed 25,000 soldiers for overseas missions, which Kadavy estimated was the largest year in about six or seven.

“Our No. 1 and best retention tool is mobilization and deployment, and retention historically is best in those units that find out they’re going to mobilize and deploy because that’s still why our soldiers join our formations,” Kadavy said, extolling the uniqueness of the National Guard. “They want to be relevant, they want to be trained and they want to be used from time to time in a balance of what they’re trying to do in their civilian careers.”

Kadavy is mindful that families and employers need to be kept informed of their soldiers’ activities, and he recognizes there is room for improvement in communicating the continued operational tempo and the need to keep the force in a strong state of readiness. “They don’t understand why we’re training so much if we’re not going to mobilize and deploy,” he said.

At the start of 2000, Kadavy noted, there was still no expectation among people joining the Army National Guard of ever deploying because that’s how it had been for decades. With the operationalization of the Guard following 9/11, mobilizations and deployments became the norm and remain so today, he said.

Asked often what the Army National Guard’s “bumper sticker” is, Kadavy said it used to be “one weekend a month and two weeks in the summer.” Nowadays, he said, it’s rare to find a soldier without a combat patch on the right shoulder, indicative of the high operational tempo.

In the past year, divisions and brigades deployed from Pennsylvania, California, Mississippi, Kansas, Tennessee and Texas for missions in Kuwait, Afghanistan, Iraq, the Horn of Africa, Europe and South America. In fiscal 2019, units from Minnesota, Georgia, Hawaii, Guam, New Jersey, Tennessee, Pennsylvania, Puerto Rico and Wisconsin will deploy to many of the same places.

Overseas and at home, the Army National Guard is working side by side with the Regular Army, requiring a higher level of commitment. The Associated Units Pilot Program, a program begun in June 2016 that pairs select National Guard and Reserve units with Regular Army units to train and build readiness together, will likely be adopted when the pilot concludes in spring 2019.

The entire force has seen an uptick in training, including the number of combat training center rotations as part of Army National Guard 4.0, a plan ushered in by Kadavy that shapes the force into a higher standard of readiness for the next 20 to 30 years.

The effort is driven by the expectation that the U.S. will face threats on multiple fronts overseas within a decade, requiring some units to be ready and able to deploy in as few as 30 days. There will also be heightened reliance on the National Guard’s air defense capabilities.

The Guard’s mission, Kadavy said, could not be accomplished without the support of families and employers, who “share their citizen-soldiers with us.”

“Predictability and transparency is important so employers can plan. We’ll recruit the soldier, but we’ve got to retain the families and the employers as they support our soldiers,” he said.