The U.S. Army Special Forces, the Green Berets, fought a secret war in the Kingdom of Laos from 1959 through 1974.

Their strategic mission was to prevent the country from toppling over to the communist side (or at least keep it neutral) while U.S. conventional forces fought next door in South Vietnam.

The war in Laos – known as the “Land of a Million Elephants” – had to be a secret one because the Geneva Agreements that guided the French departure from Indochina banned the use of foreign troops into the country. 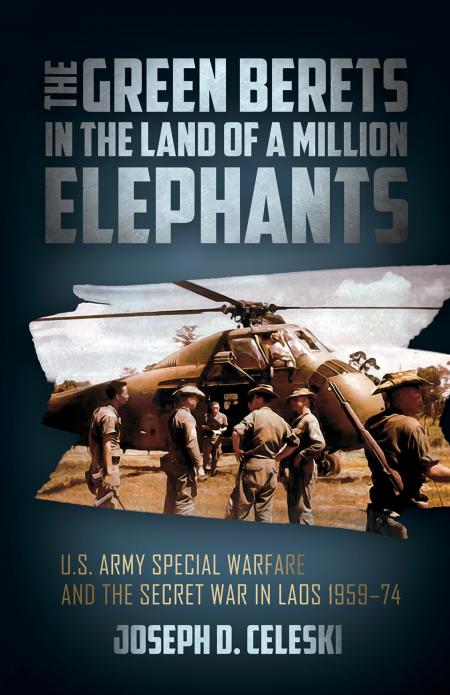 As a result, covert American operations combined elements of the military, the State Department and the CIA, all under the control of the U.S. ambassador.

For decades, little was publicly known about the war. But now materials are finally being declassified. Col. Joseph Celeski, U.S. Army, Ret., who served 23 of his 30 years of service in the Special Forces, has used these documents and extensive interviews with veterans to finally tell the story in The Green Berets in the Land of a Million Elephants.

Colonel Celeski answered a few questions to give some insight into his new addition to the AUSA Book Program:

AUSA: When did you decide to write this book?

Celeski: Probably in late 2013, and certainly by January of 2014 after my goal of working at least 10 years after retirement in September 2004 before finding a new hobby.

My favorite pastime is reading, researching, and writing about U.S. Army Green Berets – Special Forces – and the exploits of the wider SOF community. I decided to focus on the gaps in our history which have not been covered more widely in the military history literature.

Celeski: The most significant difference between the two wars is that the State Department, through their ambassadors to Laos, commanded and controlled U.S. military forces instead of the war being run by a theater-level military command.

It was also an interagency run war – State Department, Department of Defense, the intelligence community, USIS, USAID, and so on. Much of the activities of the United States in this war were clandestine and covert to circumvent the very many restrictions of the Geneva Agreements and protocols of the 1950s to prevent any introduction of foreign military forces into the country.

AUSA: Which of the American ambassadors was most effective in Laos?

Celeski: Ambassador Winthrop G. Brown. I think he was both effective and an impressive leader for his two years serving in the Land of a Million Elephants, starting in August of 1960.

Brown juggled the U.S. response to the Kong Le coup in late 1960, Kennedy’s transition of the U.S. forces in Laos under a MAAG [Military Assistance Advisory Group] in April 1961, the expansion of Green Beret teams into the country, and the running of the clandestine and covert unconventional warfare programs.

He was a strong supporter of the use of U.S. Army Special Forces to achieve his diplomatic objectives.

AUSA: What were the most important lessons learned by the Green Berets?

Celeski: You can’t just focus your training on only soldiers, NCOs, and junior officers in a foreign army you partner with, and you do not need to create them in the image of our Army capabilities.

You have to simultaneously advise and train the senior leadership, the political leadership, and the military institutions which support the security force – schools, logistics, medical system, air support, manufacturing of local arms and weapons, intelligence systems and so forth.

Know the language and culture! Accompany your advised unit into the field and fight with them in combat – that’s key and essential to have credibility as an advisor.

AUSA: Out of the many stories found in the book, is there one you would like to highlight?

Celeski: There are a few worth mentioning, and I do not want to take away anything from all of the Army veterans who served and fought in Laos in many engagements between the Pathet Lao and the North Vietnamese Army.

But for the subject of the book, the guerrilla warfare program on the Bolovens Plateau region is one of the most successful uses of unconventional warfare. It was run almost solely by about 11 Special Forces teams.

To order a copy of The Green Berets in the Land of a Million Elephants, visit www.ausa.org/books.