Get Ready Now to Fight in Megacities

Get Ready Now to Fight in Megacities

Before commanders can approve a concept of operations, direct proper planning and preparation of a battle or campaign, provide guidance for future branches and sequels, or set in place the right intelligence, command and control, or logistics networks, they must be able to visualize the operation at hand. The degree to which a plan and its execution are successful is often related to the quality of the commander’s ability to visualize. Therein lies the rub: With respect to megacities (cities of over 10 million people), commanders cannot visualize what they haven’t seen or experienced.

When I reflect on how I developed the ability to visualize a battle or a campaign, I think that ability came from four main areas. First, live simulations—training on the ground in the U.S. and around the world. In my time, this experience included not only situational training exercises, home station external evaluations and trips to the combat training centers, but also major exercises like the multidivision field exercises called REFORGER in Germany and Team Spirit in South Korea. Second, operational experiences—mine were in Haiti and Bosnia, then Iraq and in short visits to Afghanistan. Third, constructive simulations as a division and corps commander in what is now the Mission Command Training Program. Last, reading—history and contemporary accounts of battles and campaigns. None of these included megacities.

Live simulations sometimes took place in local Military Operations in Urban Terrain (MOUT) facilities—barely battalion-level exercises. During REFORGERs, our operations often took place in small German villages or farms; we only drove through cities. Team Spirit was the same way. Seoul, which is now a metropolitan area of about 25.6 million people and would qualify as a megacity, wasn’t that size when I participated in Team Spirit. More to the point, the exercise excluded Seoul anyway. Cap-Haitien, where my brigade combat team was headquartered in Haiti during 1994’s Operation Uphold Democracy, had only about 180,000 people in it. And even if I had been in Port-au-Prince, it would not have qualified as a megacity. Tuzla, where Multinational Division-North was headquartered in Bosnia, had a population of only about 110,000, and Baghdad in 2007 had a population of less than 7 million.

My reading would not have helped either. There’s just not much history of military operations in megacities. In World War II, Stalingrad’s population was about 850,000; Moscow’s was about 4.1 million; Berlin’s, 4.3 million, and Paris was at about 2.8 million. All large, so the reading may give me a sense, but none contained the population and complexities of today’s megacities.

As commanders, my cohort of officers learned to visualize a battle or a campaign as a coherent whole by integrating at least the following six elements:

1. An intelligence element. What are the enemy’s options; what are they likely to do? What information do we (the command) need, and when do we need it? What mix of collection assets do we need and how do we employ them? How do we structure the intelligence system to analyze and deliver intelligence in time to decide, act and adapt as a corporate entity?

2. A maneuver element. How does the terrain—air, ground and subterranean, as well as the mixture—in which we’re operating affect time-distance factors? How will terrain affect culmination, especially in conjunction with fires and logistics? What mix of maneuver assets do we have or have access to? How can we blend assets to move over distances and terrain to converge when, where and how our plan desires? How do we mix simultaneous actions with sequential to achieve effects on the enemy to achieve our portion of our higher headquarters’ objectives?

4. A logistics element. What will be the command’s usage rates of ammunition, food, water, fuel, medical supplies, maintenance, spare parts and other key items? What should we pre-position and where, and what should be held back outside the battle area and where? What means of resupply—air and ground—will be necessary to sustain the forces as the battle or campaign unfolds? How do we set a supply network to sustain fire coverage as the battle or campaign unfolds?

5. A command-and-control element. What will we need to establish and maintain communications throughout the command, whether the operations take place above or below ground—or both simultaneously? Where do we place these communications assets, and how do we maneuver them to sustain network coverage as the battle or campaign unfolds?

We first learned how to visualize small squad and platoon-size battles. Then we began to learn how to visualize larger, more protracted battles like those of companies, battalions and brigades. Over time, our experiences taught us how to envision complex division battles, ones that consisted of multiple, simultaneous and sequential parts. Ultimately we learned to visualize corps operations and campaigns. From the company level up, we learned that battles—and campaigns—were almost always joint and many times combined activities. Our visualization skills had to expand to accommodate the dimensions of other services as well as interagency activities. 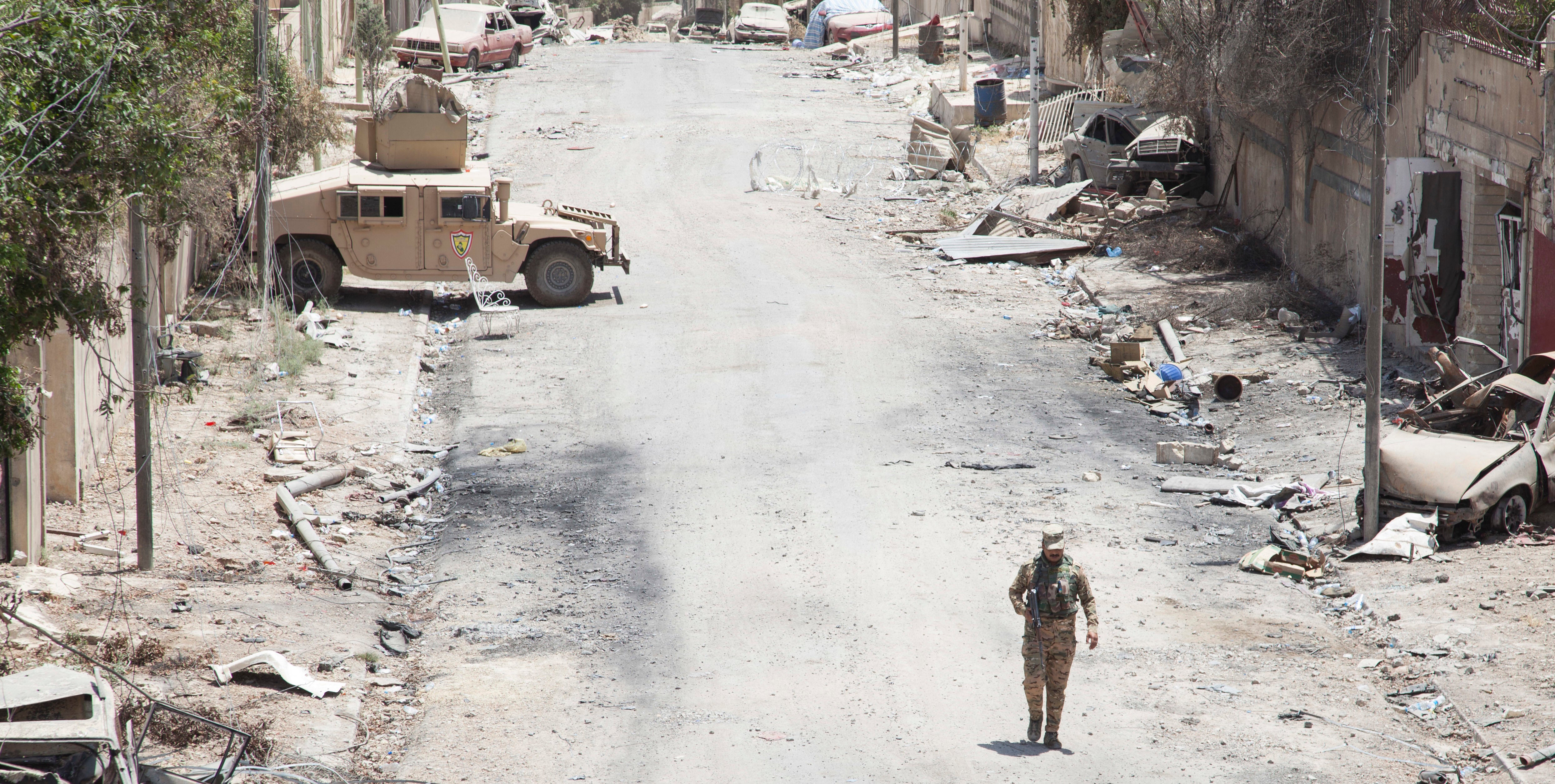 My training included multiple experiences in jungles, arctic conditions, mountains and deserts. It also included training in MOUT facilities. In each of these training conditions, I was confronted with civilians on the battlefield. Some of my operational experience took me to Cap-Haitien, Gonaives, Port-de-Paix and Fort-Liberté in Haiti; Tuzla, Bijeljina, Zvornik, Camp Dobol, Zenica and Srebrenica in Bosnia; as well as Baghdad, Baqubah, Mosul, Samara, Nasiriyah, Basra, Fallujah and Ramadi in Iraq. I consider myself lucky for having the breadth of experiences that I had, but none of this learning involved anything approaching the scope and complexity of a megacity. And that’s the point.

One of the lessons I learned through my experiences in less-than-megacities is: Compared to the human terrain of a city, physical terrain is relatively inert. Of course, physical terrain changes as the result of combat operations, but cities—collections of human beings—interact dynamically with military operations in ways that trees, rivers, mountains and deserts do not.

And megacities are not homogeneous, so the visualization challenge is to understand (a) the social, political, economic, cultural and physical dimensions of the multiple “minicities” that make up a megacity as well as (b) what holds the city together as a megacity. In fact, the Brookings Institution in 2016 published a report called “Redefining Global Cities: The seven types of global metro economies” in which the authors showed not only are megacities not homogeneous, but they differ by type.

One conclusion is clear: visualizing battles or campaigns in a megacity is not a trivial intellectual task; it involves more than aggregation of one’s experience in smaller cities. Imagining what one has never experienced is called dreaming, not visualization.

In 28 countries in 2016, 40 percent of the population lived in a single urban area of over 1 million people. That number is expected to grow by 2030. If wars are decided where people live, avoiding cities will not be an option.

Army Has a Lot to Learn

And a third conclusion emerges: The Army has a lot to learn. Let’s suppose the Army will have to conduct major combat operations in a megacity in 2023—five years from now. The three-star who might be leading the joint training group is currently a brigadier general. The division commanding general is currently a brigade commander. The brigade commanders are entering a senior service college. The battalion commanders are the current set of battalion executive and operations officers. The company commanders have just entered the service, and the lieutenants are in high school. In five years, will the Army have developed a set of officers who can visualize the battles and campaigns the country might expect them to plan and execute?

My bet is that beyond a narrow set of concept and materiel developers, the answer to that question is no, or at best, maybe a few. But a wholesale shift in the Army’s training and leader development program is unwarranted—at least now, for the Army is facing multiple possible futures as well as a war that will continue for some time. Some changes are necessary, however, to begin to create an officer corps that can visualize how battles and campaigns unfold in a megacity.

The first steps toward developing such commanders may come in the form of a reading program, a set of visual experiences through film or simulation, a game played as part of professional education, or—more likely—through some combination of these. This first step is necessary now.

In 1986, Chuck Heller and Bill Stofft edited an influential book entitled America’s First Battles, 1776–1965. The contributing authors made two main points. First, America’s Army had a mixed record of being ready for the first battle of the next war. Second, readiness for the first battle of the next war was essentially linked to tasks, conditions and standards that governed unit training as well as how the Army trained, developed and educated its leaders. When an updated version of this book is written following the Army’s first battle and campaign in a megacity, what will this chapter say?

Of course, that will depend upon decisions and actions the Army takes today. In 2009, Julia Kirby asked some interesting questions in her Harvard Business Review article “Megacities: What’s Your Strategy?” She wrote, “Who out there is thinking about what megacities mean for serving tomorrow’s consumers, optimizing tomorrow’s supply chains, and recruiting and equipping tomorrow’s workers?”

The nation is lucky to have a set of senior leaders in our Army who have taken up the challenge of megacities seriously. The U.S. Army Training and Doctrine Command has focused on the right megacity questions for several years. Now it’s time to take the next step: begin developing commanders who can visualize battles and campaigns in megacities.