The monument was initially unveiled on May 14 to honor military members and Department of Defense civilians who passed in service to the nation.

The construction of the monument was a community partnership. 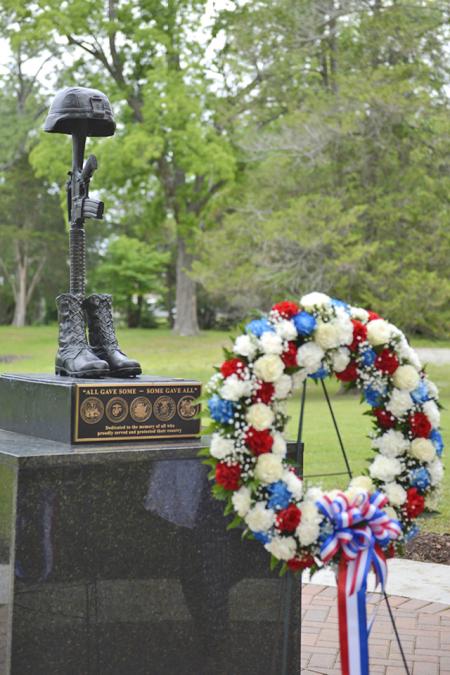 The Association of the U.S. Army’s Virginia Colonial Chapter gathered resources from local businesses and corporate partners to construct the shrine for the lost heroes.

The memorial depicts a soldier’s helmet perched on a rifle, flanked by a pair of combat boots representing the traditional “battlefield cross.”

“Last year, about this time, we stood here at Magnolia Park the day they unveiled this wonderful bronze statue, in front of many military families as we joined together in a powerful moment just like this,” said U.S. Air Force Col. Caroline M. Miller, 633rd Air Base Wing commander.

Adding, “To those families who are still standing tall, all of us here owe a tremendous debt and gratitude to you, as you continue to stand behind our nation’s fighting forces.”

To honor the fallen warriors, a wreath was laid upon the memorial in Magnolia Park while service members, Gold Star families and community members looked on.

The gift of flowers at a memorial site is a ritual understood across cultures to bestow both the beauty and brevity of life – a tradition that speaks to the memories of loved ones.

“It doesn’t matter how much time has passed – no words of condolence can even begin to adequately console a survivor’s grief,” said U.S. Army Maj. Gen. Paul M. Benenati, Training and Doctrine Command deputy chief of staff.

He noted, “Please know we have the greatest respect and appreciation for your contributions and sacrifice. We are proud to honor you and your loved ones here today in this beautiful place that will forever mark the sacrifices that were made.”

Among the crowd were the honorably discharged veterans and first responders known as the Patriot Guard – a federally registered non-profit organization that ensures the dignity and respect for fallen military heroes at memorial services.

Adding, “Your loved ones accomplished much, and they earned an eternal place in the history of our nation.”