After slightly less than a year on the job, Army Secretary Mark T. Esper senses the Army is making great gains in near-term readiness and has a bright future if it can stay on course with some striking and transformational leaps in warfighting capabilities.

“I think the Army is on a great trajectory to achieve the readiness called for in our National Security Strategy,” said the 54-year-old who was sworn in as the 23rd secretary of the Army on Nov. 20, putting him in charge of an already underway effort to make immediate improvements in fighting strength and set the Army on a new, streamlined path toward fielding a modernized force. 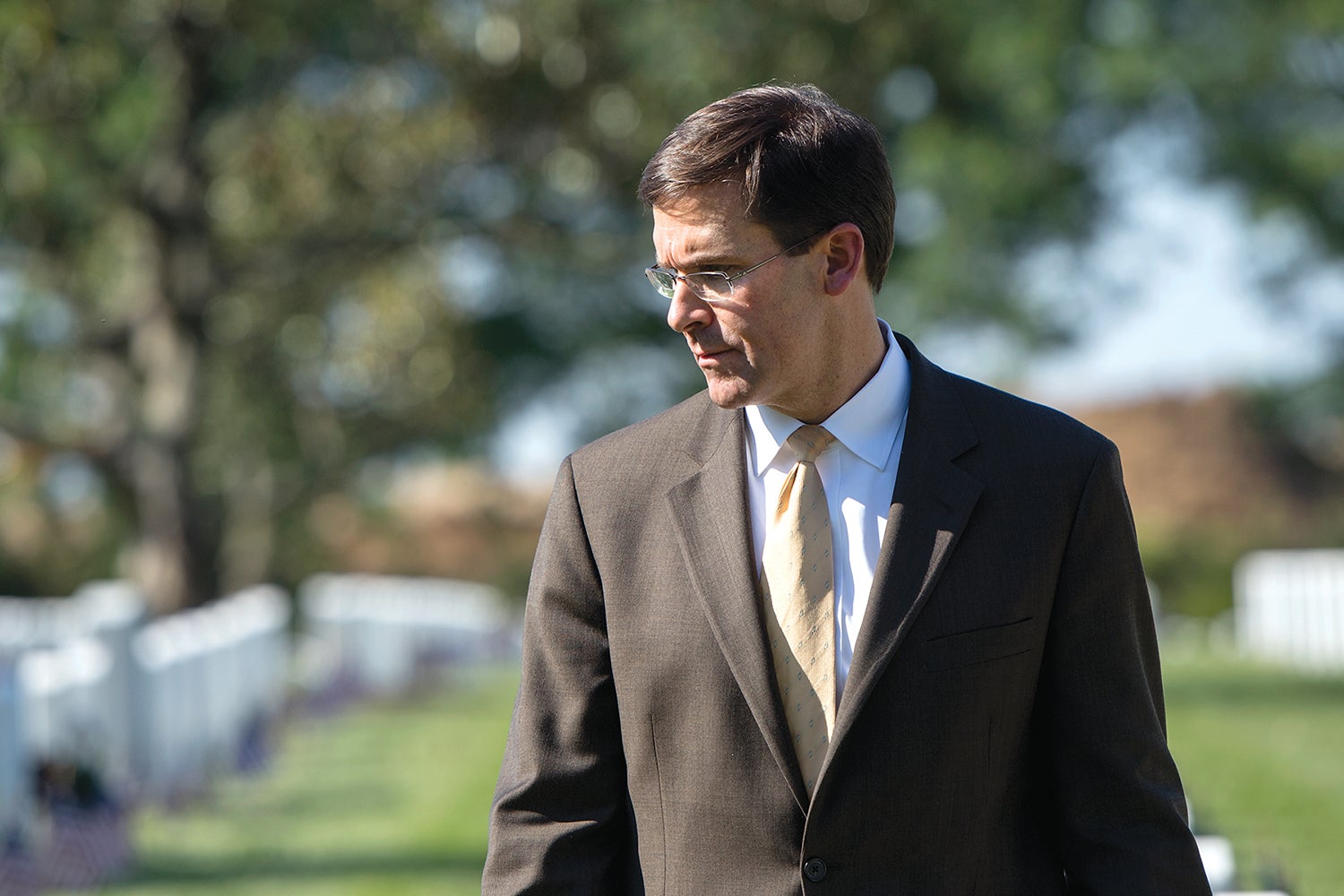 “We are willing to make big moves,” said Esper, a West Point graduate and Gulf War veteran who served in the Regular Army, Army National Guard and Army Reserve before retiring in 2007.

He’s optimistic about the future. “I feel blessed we have a team that is unified in terms of how we think, where we believe the needs go and the tone we need to set,” Esper said.

One of his successes, he said, was the June release of a 10-year plan to win current and future wars, a document signed by Esper and Army Chief of Staff Gen. Mark A. Milley that Esper said strikes a balance between “being aspirational” while also being descriptive enough to offer a path to follow.

The Army Vision for 2028 calls for the Regular Army to grow by 2028 to 500,000 soldiers, an increase of about 16,500 over current levels, “with associated growth in the Guard and Reserve,” Esper said. “To get there, I need to be on a steady growth path” of about 4,000 more active-duty soldiers each year. That pace allows recruiting and training to be done at a pace that doesn’t overtax programs, and it doesn’t produce pressure to reduce recruiting quality standards to meet goals.

If anything, Esper intends to raise recruiting standards, suggesting the Army would be “turning up the dials on standards” because “it is more important that we get the best young men and women than just the numbers, pure numbers.”

“We’ve got a lot of folks who have done multiple deployments,” he said. This is especially true today with fires brigades, where the pace of deployments is affecting soldiers, their families and the employers of Guard and Reserve soldiers. “That’s tough,” he said.

Soldiers are not complaining, at least not to him during his frequent visits to units. New soldiers “more often than not want to deploy,” he said. Soldiers on their second or third enlistment “are not saying they don’t want to go” but he senses the strain.

More recruiting is part of the solution but so is “pushing more people out of headquarters,” an effort that involves changing some organizational structures, Esper said.

Modernization is a key ingredient of the Army Vision statement, he said, acknowledging the Army has been slow to develop and field most things. For example, there are still fighting vehicles in the Army that were there before he began his service in 1986. “While there have been upgrades over the years, we have reached the point where we need to make the leap to the next generation and build some capabilities on top of that.”

The U.S. Army Futures Command is being established in Austin, Texas, with a focus on creating capabilities before being wed to platforms. It is key to preparing for the future, Esper said, expressing confidence in the new organization and cross-functional teams created to make warfighter requirements the first priority in the development and acquisition process.

Money will be needed for capability improvements. The fiscal 2018 and 2019 budgets have been helpful, Esper said, but what happens next isn’t clear because Congress and the White House haven’t settled on priorities. Getting extra funding for the Army could prove difficult given Trump administration expectations that the federal budget deficit will increase from $890 billion in 2018 to more than $1 trillion in 2019, and remain that high through 2021.

What the Army can and will do is look from within for places to save money, he said, but he feels “pretty good about where we are on the budget” because the Army has done some belt-tightening.

Esper said he and the Army chief of staff have “scoured all 500-plus programs in the budget to look for things to cancel and look for things to reduce. We believe we have freed up enough money to take care of our modernization priorities,” he said. They’ve also found money to pay for extending basic training and other priorities, he said.

Cutting requires making tough choices, he acknowledged, but also means taking “a very objective look at what is in front of you.” The question, he said, is whether the program you are reviewing “is of higher importance than a new fighting vehicle or a new air and missile defense system or a new future vertical lift.” With this balancing act, decisions become easier. “Frankly, it is just a matter of doing things differently, making sure that the process is giving you the right answers.”

That same kind of process has been used by Esper and other Army leaders to provide more time for critical duties by removing unneeded bureaucratic chores, mostly by removing Armywide mandates for administrative functions. Sometimes this means to stop doing things that aren’t important.

Headquarters staffs are also being reduced, Esper said. “On the reform front, we are pushing uniformed folks out of headquarters to get more of them into the field,” Esper said.

“I’ve asked everybody to look at what you are doing, and ask if this is something that my headquarters should be doing or it is something that can be pushed back down to decentralize power.” Some tasks may not even need to be done at all, he said.

“I think if we can shed those functions, it will make it easier to reduce our headquarters.”

The Army Vision for 2028 endorsed by Esper has one other key point beyond manning, organizing, training and equipping the force. It also talks about leadership. “What the chief and I keep talking about is empowering our NCOs and our junior leaders, making them responsible for training their soldiers, taking care of their soldiers not just during the duty day but off duty and on the weekends,” he said.

He sees this as a move away from what he called “elevated, centralized control” to empowering leaders “back down at the lowest level available.”

One of the most popular things he’s done is giving NCOs more responsibility and authority, reducing administrative chores and the practice of filing extensive justifications for decisions.

“We still expect you to do the right thing,” Esper said, but have reduced what headquarters requires.