Energy for the Mission and Sometimes, More

Energy for the Mission and Sometimes, More

The first time I opened an MRE, I was 9 years old. My neighbor, a former Marine, had bought a box of them from the surplus store for a hunting trip and had one left over. He handed it to me and said, “I think you’ll get a kick out of this.”

I tore open the plastic bag and from the moment I looked inside, I was hooked. Bread, crackers, cheese, beef stew, all inside individual pouches with calories and vitamin content spelled out on the back of each; matches; toilet paper; gum; the smallest bottle of hot sauce I’d ever seen—everything had a purpose, and everything was in its place. I thought: This has everything a person could ever need.

During Cadet Basic Training at West Point, we ate plenty of MREs. They were a novelty at first; a tangible, edible reminder that we were in the Army and this was our chosen profession. By the time sophomore summer training ended, we had learned how to make the meals lighter and more compact by cutting open the bag and removing all the cardboard before placing it in a rucksack.

We had also learned that if you want your food spicy, you should bring your own hot sauce; the provided amount didn’t cut it. And we’d learned how to make MRE heater bombs by putting an MRE heater and water into a plastic bottle and waiting for the produced gas to burst the container. I hate to admit that we may have used our meals as much for the food as for the entertainment value. But the camaraderie and laughs shared around those government-issued sack lunches are something I’ll remember until my dying day.

Then we graduated. We joined various branches in the Army; moved to our respective posts; and assumed our roles as platoon leaders in Iraq, Afghanistan and every other hot spot around the world. I remember beginning train-up for Iraq with the 1st Cavalry Division at Fort Hood, Texas. As we prepared for the National Training Center at Fort Irwin, Calif., every time something was uncomfortable or inconvenient, we were reminded that now was the time to “practice making sacrifices.”

Plenty of that “practice” involved eating MREs. Each time we were in the field, some soldiers thought up ways to skip out on eating our GI food. They had backpacks full of candy and beef jerky, and coolers full of energy drinks and Cheeseburger Big Bites. They’d find any excuse to slip back to the rear—a doctor appointment, detail in the arms room, sensitive items inventory—so they could come back and brag to their buddies that they had a “good” meal. (Often, that “good” meal was fast food.)

And then we deployed. Our unit was stationed in Iraq for 2011, and we spent the better part of a year drawing down our joint security station and preparing to hand over the security of our province to the Iraqi army and police. When the deployment began, the amenities were plenty at our higher headquarters: Army & Air Force Exchange Service (AAFES) shops, contracted dining facilities, the internet. But by the time we’d closed down our joint service support and were well into the process of drawing down our combat operating base, the contracts termed out. The internet was turned off, and the dining facilities contractor left. So did all the “nonessential” civilian personnel with AAFES. (The portable toilet contracts lapsed, too.)

There wasn’t much left but soldiers, ammunition, water—and MREs. We were staring down the sacrifices we’d practiced making, and everyone was so tired and life was so busy that we didn’t have time to think about it. MREs weren’t even an afterthought; they were the only option.

The days and nights blurred together with patrols; training sessions with locals; and a perpetual string of warning orders, operation orders, precombat checks and inspections, and prebriefs and debriefs. We all worked hard and got our mission done. Eating MREs became nothing more than a critical action that marked the moments in the day.

It was akin to breathing: something that took place without thought but was completely essential. MREs weren’t aggravating or exciting but simply energy for the mission; nothing more and nothing less. Perhaps the only thought I had about MREs during our deployment was the first time I heard an IED go off outside the gates of our co-located operating base. I remember thinking it sounded a lot like the MRE bombs we used to make.

The deployment ended and in another blur of nights, days and debriefs, we were back in Kuwait and then arriving home. We made it stateside before Christmas. Surrounded by friends and family and sitting around dining tables, I caught up on everything I’d missed. I remember plenty of meals where I could barely get a bite in edgewise, in between answering all the inevitable post-deployment questions from the people I’d left just a short year ago.

Getting back into the normal ebb and flow of garrison life, MREs became an afterthought again, something consumed for a few days here and there during a training exercise. After changing posts and assignments a few more times, I came off active duty and transitioned to the Army Reserve. Lured into the civilian world, I now spend my workdays with a great oil company, in a job I love.

Recently, for the first time in a long time, I went with my Army Reserve unit to the rifle range to qualify on our weapons. This was part of preparation for two weeks of annual training. 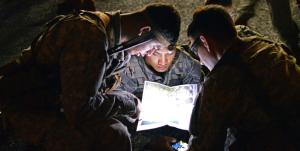 While I was sitting in the bleachers, complete with my rifle qualification—I scored a 37 out of 40—and excited to be done with a long weekend, our supply sergeant pulled up in a Humvee with cases of MREs and started handing them out. Even though we would be wrapping up our training in just a few hours and I’d be heading home for a full meal, the MREs were going to be deducted from our drill pay, so I figured I’d take my lunch. No sense in turning down food I’d already purchased.

For the first time in years, I tore open another MRE. Looking inside, I saw mostly the same items I had when I was 9 years old, minus the matches. I put the opened MRE into my rucksack with the pouches still sealed and instead of eating it, decided to bring it back to my civilian boss’s 8-year-old son. He’s been full of questions about the military since he found out I was an “Army guy.” I knew he’d get a kick out of “Army guy food.”

Psyching myself up for the two-hour drive back home to Tulsa, Okla., I had a thousand things running through my mind: an expense report I’d have to file for some travel I just finished, a phone call I needed to make with a business partner I’d be having lunch with next week, and a call with our real estate agent to set up a walk-through of the new loft my wife and I were looking at. I threw my rucksack, with the MRE inside, into my car trunk. Before closing the trunk, though, I looked at the bag. In my 29-year-old brain, I thought: At what point did this become not enough?