As the Army reorients itself after almost two decades of fighting in Iraq and Afghanistan, Sgt. Maj. of the Army Michael A. Grinston is focused on making sure soldiers are fit, healthy and ready for the next fight.

To do that, Grinston is looking at everything from living conditions in the barracks and the quality of chow hall food, to developing ways to better manage soldiers’ careers and talents, to pushing soldiers to train for the new Army Combat Fitness Test and Expert Soldier Badge.

“We’ve got the greatest Army in the world, [and] we want to stay on top,” Grinston said. “Everybody wants to be No. 1, so it’s pretty hard to be the best for so long if you don’t continuously try and get better.”

He’s also focusing on the sergeant, staff sergeant and sergeant first class ranks, the critical midgrade NCOs the Army has increasingly leaned on as it adds more drill sergeants and recruiters and stands up security force assistance brigades.

“If I can get a sergeant and staff sergeant more engaged, get them better trained, all those little things that we think are difficult, that plague the Army sometimes, will be better addressed because the staff sergeant heads it off,” Grinston said.

Making sure this group of NCOs is well trained and equipped, and, in turn, empowered to lead and train their soldiers, will make a key difference in the Army, he said. “We’ve seen some indicators that the small unit is not where it needs to be right now,” he said, citing as an example a recent spike in vehicle rollovers.

To tackle the issue, Grinston said he’s looking at everything from education to training to assignments.

“Do we have the right mix? Is our professional military education right? The institutional, self-development and operational, all those domains, do we have that right?”

Grinston, who was sworn in Aug. 9, became the Army’s top enlisted adviser after serving as the command sergeant major of the U.S. Army Forces Command. A native of Jasper, Alabama, Grinston joined the Army in October 1987 as a cannon crew member and has served at every leadership level.

He has deployed multiple times, including once in support of Operation Inherent Resolve in Iraq, and twice each to support Operations Iraqi Freedom and Enduring Freedom.

Because of his experiences, Grinston has a keen interest in making sure soldiers have what they need for the fight—and that starts with making sure they are mastering their fundamental skills and tasks.

One way to do that is by preparing and testing for the Expert Soldier Badge, a new skill badge similar to the Expert Infantry Badge and Expert Field Medical Badge for soldiers outside those MOSs.

“It’s not just about a badge. Even those that don’t earn the badge, it’s good training,” Grinston said. “The goal is to get more units to do the training, and even if they don’t achieve the goal, they’re going to be better for it.”

Grinston recalled running the Expert Soldier Badge pilot when he was the I Corps command sergeant major at Joint Base Lewis-McChord, Washington.

“There was a specialist, and the soldier goes, ‘Sergeant Major, if I would’ve done this in preparation for my training before I deployed, I would’ve felt more comfortable getting off that plane when I deployed,’” Grinston said. “That, to me, sold it right there. I said, ‘OK, we’ve got to do this.’”

The new Army Combat Fitness Test (ACFT), which Grinston called “long overdue,” is another way for the service to get soldiers fit and ready to fight, but it’s not the only key to soldier health, he said.

“Fundamentally, everybody’s really focusing in on the ACFT—I love it and it’s here to stay—but I think we also need to look at the other piece of fitness, and we all know it’s diet and nutrition and sleep.”

One of Grinston’s leading initiatives is to look at how the Army feeds soldiers in the dining facilities. It could be as simple as putting the salad bar up front and making sure there are tasty and nutritious options for soldiers to choose from—and putting cake and other desserts behind the serving line. Or it could mean spending more money to make sure soldiers have healthy options in the dining facility, Grinston said.

Another area the Army struggles with is sleep, especially when soldiers are deployed.

“Your body is going to recover better if you have sleep. You make better decisions when you have sleep,” Grinston said. “I’ve been on those deployments where everybody was prideful about [getting less sleep]. We’re making life or death decisions, and you could equate it to being drunk if you didn’t get enough sleep.”

Grinston acknowledged that deployments and combat conditions don’t always allow for proper sleep schedules, but he also said the Army must combat a culture in which soldiers pride themselves on being able to function with as little sleep as possible.

Another area that has Grinston’s attention is an ongoing effort by the Soldier Lethality Cross-Functional Team to provide the Army with a baseline from which to measure a squad’s effectiveness.

“We’re trying to actually measure what are all the parameters that make a squad lethal,” he said. “Most people just go, ‘Hey, can you shoot and hit the target?’ But you have to look at everything.”

If soldiers are exhausted after a 4-mile foot march, they’re no longer able to effectively fight once they reach the objective, Grinston said. By measuring that, the Army is then able to formulate a baseline and work with soldiers to improve.

It could be a more well-rounded diet or more cardio, but “how do we measure soldier lethality, and then how do we equate that to a measurable metric, and how do we make a difference?” Grinston said.

One of his personal goals, Grinston said, is to define soldier lethality and set a baseline.

“Once we define that, once we measure that, then it’s a tangible goal,” he said. “If you get an 8.2, my goal is to get everybody to a nine.”

This year, the Army’s NCOs also can expect to see one of the biggest changes to NCO promotions in 50 years. The Army is implementing an improved merit-based promotion system, where it will no longer consider time in grade or time in service when determining who gets promoted and when.

This new system will make sure the best NCOs are promoted first, and it will allow commanders and leaders to motivate and mentor those who may need extra help, Grinston said.

“It’s a fundamental change in how we’ve done it in the past,” he said, adding that he believes this will be good for the NCO corps.

The Army also continues to work on how it can best match a soldier with the right job based on the individual’s talents and skills. It’s a task that’s a little bit tougher than what’s being done for officers because of the size of the Army’s enlisted population, he said.

Every month, each brigade sees a turnover of about 300 soldiers, he said. Every year, about 68,000 soldiers leave the Army, and another 68,000 new soldiers enter it.

“When you have a much larger population, it’s just data,” he said. The more information the Army has, the better it will be able to develop processes to filter information.

Grinston continues to pay attention to issues such as housing, to include barracks, and permanent change-of-station (PCS) moves. 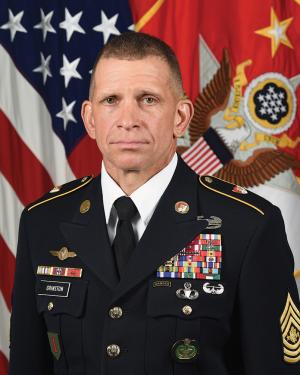 Sgt. Maj. of the Army Michael A. Grinston, the Army’s top enlisted adviser.

In addition to making sure soldiers are living in high-quality barracks—Grinston promised that soldiers will see him walking through barracks—he also is focused on making sure PCS moves go as smoothly as possible.

“We owe this to our families,” especially because moving is stressful, he said. From his personal experience, if the Army got his house and household goods in order, “you can send me wherever I need to go. I’ll do anything, because my family is taken care of, and I don’t have to worry about that.”

In the long term, Grinston wants to build better leaders in the sergeant, staff sergeant and sergeant first class ranks.

These NCOs have been under pressure for a while, as the Army has needed more recruiters amid a recruiting crunch and more drill sergeants as it extended infantry One-Station Unit Training and put drill sergeants back in Advanced Individual Training.

“All that takes a toll on the Army as a whole,” he said. “We need it, we have to do it, but we’ve got to find that balance.”

For example, when the Army stands up a new security force assistance brigade, which is made up of experienced officers and NCOs, “I don’t have 100 staff sergeants sitting in the wings,” Grinston said. “It just takes time for us to grow. We’re going to get there, but that’s where the focus is right now.”

Looking ahead, Grinston said the Army is about to undergo a lot of change. “A lot of people get frustrated with change, but that doesn’t really frustrate me. I don’t see it as a challenge. I see it as an opportunity.”

The “biggest” challenge facing the Army is how it will balance maintaining readiness while modernizing for the future, he said. “When we get a new tank or the next-generation vehicle, how is that going to equate to readiness? How do we maintain this high level of readiness if we’re fielding a brigade?”

The key will be NCOs, particularly the sergeants, staff sergeants and sergeants first class in the Army’s formations, he said.

“If that group are experts in their field, if I know my craft and I know the basics and I get a new device, that all goes a lot smoother. If we get disciplined, fit soldiers, highly motivated, well-trained masters of their field in that midgrade, when we modernize, that transition, I think, is going to be a lot smoother.”