At a time of critical transformation and in the face of new global threats, the Association of the U.S. Army stands ready to help America’s Army.

Founded in 1950 as a nonpartisan, educational nonprofit, our growing professional association exists to strengthen the bond between soldiers and the American people, promote the military profession and enhance ties with industry.

This has always been a worthy mission. It is even more important today as America faces national security challenges from new and expanding threats and an increasing disconnect between service members and the citizens they serve, all while the Army works on a pressing need to transform its capabilities and doctrine.

Just as we did in 1950, when the creation of AUSA consolidated the efforts of its many branches to speak with one voice about national security threats and foster public understanding and support for the Army, AUSA in 2023 and beyond must continue to focus on three key objectives—Educate, Inform and Connect—to support the Army of today and the future. 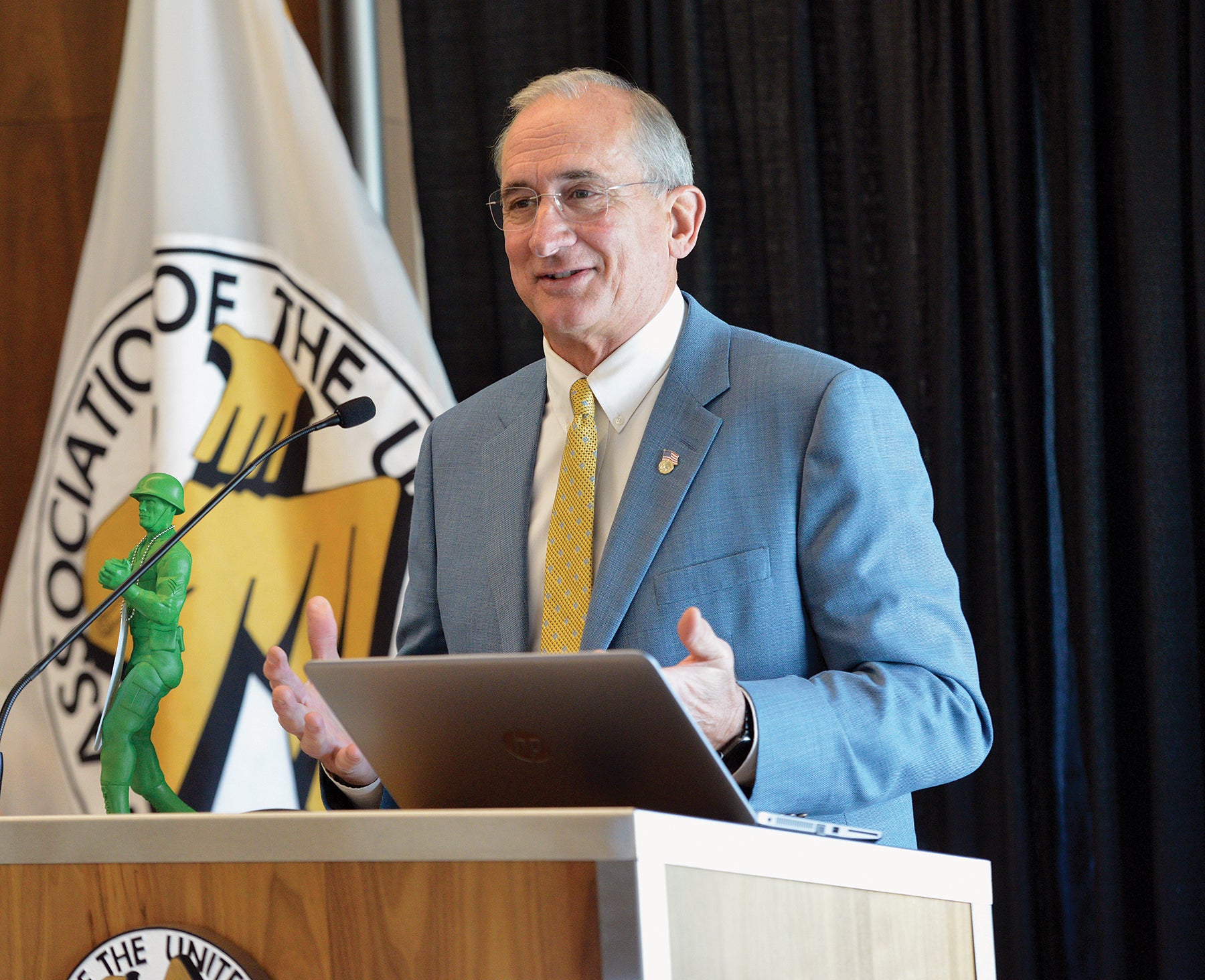 “Educate” means many things at AUSA. We deliver programs, publications, products, events and resources to soldiers and their families, Army civilians, veterans and retirees, and the many businesses and industries that support the Army. Using our platforms, we spread awareness of the Army’s critical role in national security and the unique capabilities and resources it provides.

Our efforts also include educating policymakers, legislators and the public about the role of industry as the Army modernizes. We compile reports on national security issues, explaining the Army’s expanding role in national security and its essential part in combined joint operations. Included in this work are national security reports and studies, produced by our professional staff, examining the critical role of the Army in future warfare.

Our year-old Center for Leadership is a big part of AUSA’s education mission. Backed by more than 35 mentors, the team is focused on sharing best practices and developing new ideas for helping young officers and enlisted leaders. Through podcasts, webinars and in-person events, the program is designed to help leaders and their teams succeed.

In May, we offered a well-received solarium for young Army leaders in conjunction with AUSA’s LANPAC Symposium and Exposition in Honolulu, and we are planning an even bigger solarium during our Annual Meeting and Exposition Oct. 10–12 in Washington, D.C.

We also have plans to grow our popular Young Professionals program, which offers networking and mentorship opportunities for soldiers, veterans, family members, Army civilians and others who support the Army and are in search of professional development.

“Inform” means telling the Army’s story to a wide audience, something that has been a priority at AUSA since its founding. Through ARMY magazine and our many other publications and events, we explain why the Army exists, its critical role in peace and war, and its many benefits to the nation.

This is an important task, as we remind key decision-makers of the critical role of the Army and why its transformation is so important. We address key issues and current and future threats. Recent papers have looked at the value of the Army’s new multi-domain task forces, how better data management and sharing can give the Army an upper hand and why the U.S. needs to be concerned about hypersonic weapons being developed by Russia and China.

“Connect” may be one of our most important undertakings. Aided by our members across nine regions and 121 chapters, AUSA has the network to link communities with soldiers in deeper, more meaningful ways that go beyond just thanking a stranger for their service.

We are a bridge connecting the Army, industry and the public, with the goal of strengthening support for our Army. It is a way of building support for Army and industry initiatives. It also creates a network that can help military members and their families find local resources and feel like part of their community.

Widening our connections even more, our Association Partners program links AUSA with like-minded groups in a mutually beneficial relationship.

Taken together, what we have is a global network of volunteers who show by their membership in AUSA that they are interested in helping and supporting soldiers and their families.

This mix of Educate, Inform and Connect fulfills AUSA’s purpose of contributing to the advancement of the Army and the security of the U.S., a vital task in our complex and challenging world.

We are at a critical moment in history as the Army undertakes a far-reaching transformation and revises its warfighting doctrine. Change is difficult and explaining why the Army is changing and why it needs new capabilities requires dedicated effort.

This is a big task. After spending two decades fighting terrorism with counterinsurgency operations, the Army now must be prepared for high stakes and fast-moving warfare. The Army must be ready to deter aggression by making any potential foe think twice about attacking the U.S., its interests and its friends, and it must be ready to defeat any adversary that makes the wrong choice.

There is no doubt that the Army is on the right track. Its wise list of modernization priorities will deliver by 2030 an Army that does everything its leaders have promised. The challenge is the Army needs time, money, momentum and a little patience to succeed.

While the Army is on the right path, the way ahead remains bumpy. Full funding of Army transformation has not been secured and creating dramatically superior technology takes time, even with streamlined processes. To succeed, the Army needs to maintain its momentum and, if possible, move even faster, because potential adversaries are not standing still with their own weapons programs.

The result must position the Army to be part of a combined, joint force where success may depend on how well everyone works together and how adaptive they are when war plans need to be altered.

The Army faces another challenge where AUSA’s help is needed, and that involves recruiting. One of AUSA’s missions is to connect the Army with the rest of America, revealing the many opportunities available to those who want to serve.

Through our chapters, national and community partners, events, podcasts and publications, AUSA can spread the word about the array of benefits available to those who serve, the opportunities to learn new and highly marketable skills and the simple value of being part of something worthwhile. It is more than bonuses, pay and paid vacation. It is also about doing meaningful work as part of a team.

Here at AUSA, we stand ready to help America’s Army.