Course Designed to Teach Leaders How to Think

Course Designed to Teach Leaders How to Think

The U.S. Army has launched an Innovative Leaders Course. Due to increased complexity and uncertainty in the contemporary operational environment, this academic course has the potential to bring about combat readiness.

The aim of the year-old course is to build combat readiness by:

Rob McClary is an instructor at the University of Foreign Military and Cultural Studies (also known as the Red Team School) at Fort Leavenworth, Kansas, which is also home to the Innovative Leaders Course. The two-week course is structured like the Red Team School, which is built upon four pillars: fostering cultural empathy; self-awareness and reflection; decision support and groupthink mitigation; and applied critical thinking.

McClary, who is a retired Marine Corps lieutenant colonel, came up with the idea for the Innovative Leaders Course, which launched in March 2019. He said the key distinction between the Red Team Members Course, which is taught at the Red Team School, and the Innovative Leaders Course is the creation of an innovation lab where students apply the concepts and tools they are learning to impact real-life challenges.

Beagle asked McClary to help his staff focus on solving “wicked problems.” Wicked problems are problems that are difficult or impossible to solve because of incomplete, contradictory or changing requirements that are often difficult to recognize.

More specifically, Beagle’s intent was for McClary to assist his staff with problem analysis. Beagle said his question to McClary was: How do you get people to embrace and learn—to come up with better applications, new methods and new solutions? “Fundamentally, when I look at it, it comes back to problem analysis,” Beagle said. “What we really need to get good at is problem identification. We must identify the right problem, then have the wherewithal to develop the right solutions.”

We also interviewed Maj. Gen. Douglas Crissman, director of the Mission Command Center of Excellence at Fort Leavenworth. “Agile and adaptive leaders need to problem-solve by using the Army design methodology, the Military Decision Making Process and troop-leading procedures,” Crissman said. “But they don’t have the time. So innovation becomes an ingredient. Agile and adaptive leaders are able to thrive in counterinsurgency and large-scale operations environments by running with the commander’s intent and by correctly defining the problem. An example of innovation is to build an ad hoc and diverse force to help the commander build guidance unconstrained by traditional timelines.”

McClary developed the idea of the Innovative Leaders Course to generate innovative ideas that solve strategic, operational and tactical problems in the Army. Crissman discussed how courses like this are instrumental in creating agile leaders. “As a brigade commander, I sent soldiers to the Asymmetric Warfare Adaptive Leader [Program],” Crissman said, adding he would like to see the Innovative Leaders Course generate innovative leaders who are able to adapt “in stride.”

Both Crissman and Beagle recognize that the Army has a window of opportunity to bring about true innovation. The future of warfare seems to change by the day, and the Army must be prepared for a future of 3D printed weapons, communication architecture that masks synchronized attacks, and an abundance of other methodologies and technology it doesn’t even know it needs or must address.

McClary designed the Innovative Leaders Course to take on these challenges and encourage leaders to think differently. The course follows a mindset like that outlined by William Lind, author of the Maneuver Warfare Handbook, who posits that maneuver warfare is not about movement, but about thinking.

The creation of the course is perfectly timed for how the Army plans to fight in the future through multidomain operations. In U.S. Army Training and Doctrine Command Pamphlet 525-3-1: The U.S. Army in Multi-Domain Operations 2028, the Army proposes a series of solutions to solve the problem of “layered standoff.” The central idea in solving this problem is the rapid and continuous integration of all domains of warfare to deter and prevail as the Army competes short of armed conflict. 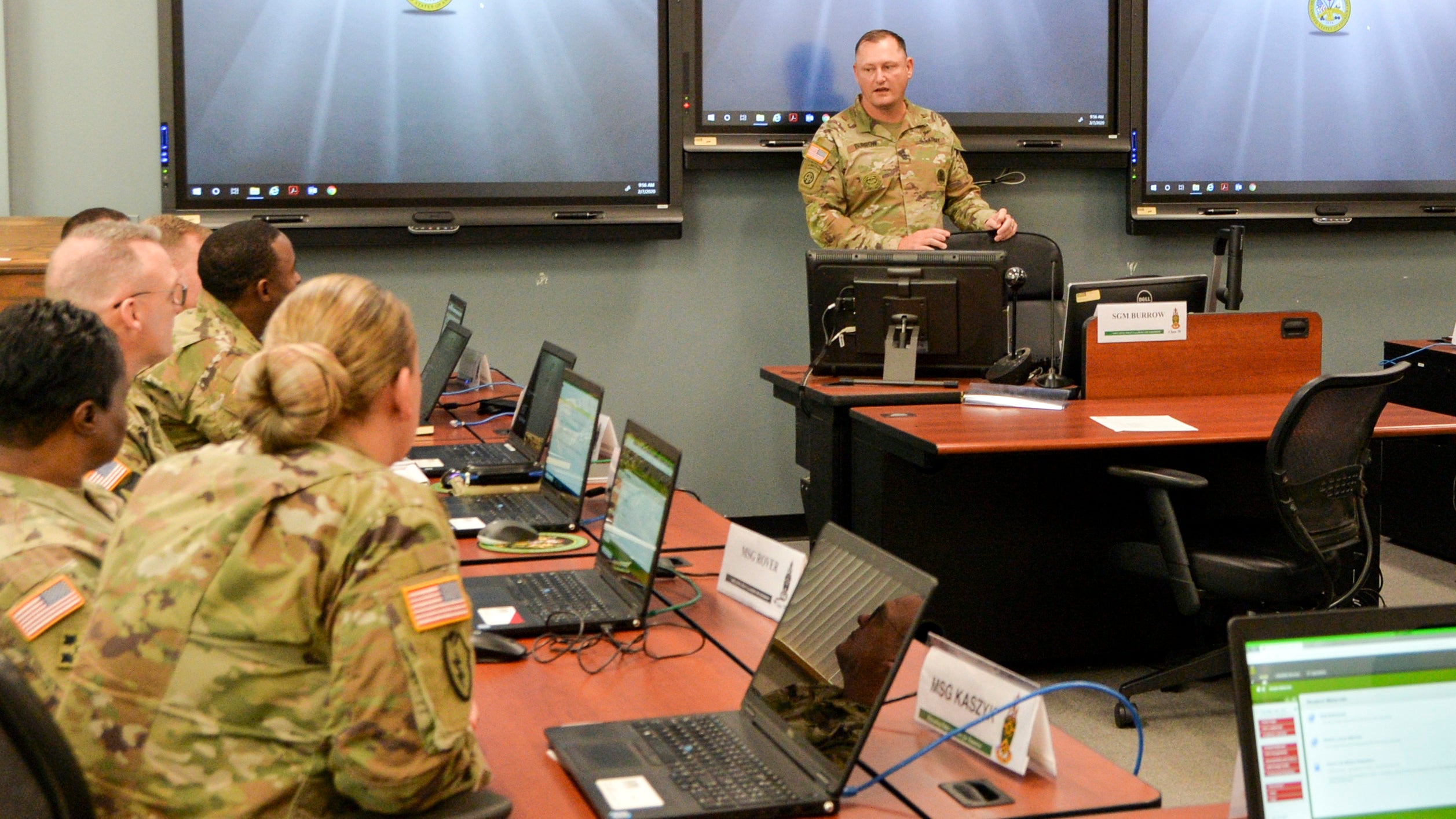 According to the pamphlet, the strategic aim of multidomain operations is “the use of layered stand-off in the political, military and economic realms to separate the U.S. from our partners. Should conflict come, they will employ multiple layers of stand-off in all domains—land, sea, air, space and cyberspace—to separate U.S. forces and our allies in time, space, and function in order to defeat us.”

One of the tenets of multidomain operations is convergence in time, space and capabilities. Col. Curt Taylor and Maj. Larry Kay provide an excellent discussion of multidomain operations in the August Modern War Institute article “Putting the Enemy Between a Rock and a Hard Place: Multi-Domain Operations in Practice.” They say the Army’s vision of how it will fight in the future rests on the notion of the “dilemma.”

As described by Taylor and Kay, “Multidomain operations as a concept proposes that the joint force can achieve competitive advantage over a near-peer adversary by presenting multiple complementary threats that each require a response, thereby exposing adversary vulnerabilities to other threats. It is the artful combination of these multiple dilemmas, rather than a clear overmatch in terms of any particular capability, that produces the desired advantage.”

Taylor and Kay define a dilemma as a situation in which a difficult choice has to be made between two or more alternatives, which should be equally undesirable ones. Multidomain operations strives to present the enemy with multiple dilemmas across multiple domains and in multiple locations. Taylor and Kay say the goal is to provide complementary tools and when applied rapidly and in close synchronization, exchange “mass for tempo and [force] the enemy into multiple dilemmas across multiple domains.”

The most interesting connection Taylor and Kay make is between multidomain operations and Air Force pilot John Boyd’s Observe, Orient, Decide and Act (OODA) loop. By providing multiple dilemmas in unexpected ways, they posit that these actions diminish the enemy’s decision space and disrupt the enemy’s understanding of its own plan. They found that the goal should be to continuously present multiple dilemmas to ensure the enemy becomes stuck in what they call the “O-O,” or Observe-Orient, portion of the loop.

In an exercise with the 1st Infantry Division, Taylor and Kay write: “By the time the enemy observed and oriented on one dilemma, the division sought to present another, thereby causing the enemy to not render a decision on the initial dilemma.”

If the Innovative Leaders Course is used to improve warfighters’ understanding and execution of multidomain operations, then leaders can be provided with the ability to develop solutions to get inside the enemy OODA loop and figure out how to use the OODA loop to improve their internal actions. Taylor and Kay’s article provides the perfect example of what we call placing innovation inside the OODA loop in multidomain operations.

Boyd’s OODA loop helps warfighters possess an accurate understanding of what multidomain operations are. The Innovative Leaders Course is the one class that can teach leaders how to innovate in multidomain operations, both as an organization and as an individual. Multidomain operations combines large-scale operations and guerrilla warfare into one powerful concept. It does what British Army officer and writer T.E. Lawrence recommended through time, space and force by “using the smallest force, at the quickest time, at the farthest place.”

A fundamental understanding of multidomain operations shows the truth behind Lawrence’s tactic of “tip and run” in that we should seek to inflict strokes on the enemy, not pushes. It follows the principles of Lawrence’s strategy: ubiquity (presence everywhere or in many places, especially simultaneously), mobility, adaptability, fluidity and autonomy.

The Innovative Leaders Course is the future of professional military education in the Army and should be the ideal mechanism to accurately teach and use innovation within concepts such as Multi-Domain Operations.

Finally, one of the most important aspects of the course is that it strives to produce what Lawrence referred to as the irrational tenth: “Nine-tenths of tactics are certain, and taught in books: but the irrational tenth is like the kingfisher flashing across the pool and that is the test of generals.”

All other courses teach the nine-tenths in front of the curtain—or what to think—yet the Innovative Leaders Course is one of the few courses that brings out the irrational tenth—how to think—that resides behind the curtain.