For this remarkable accomplishment during the Meuse-Argonne campaign of World War I, Corporal York was soon awarded sergeant’s stripes – and received a Medal of Honor. 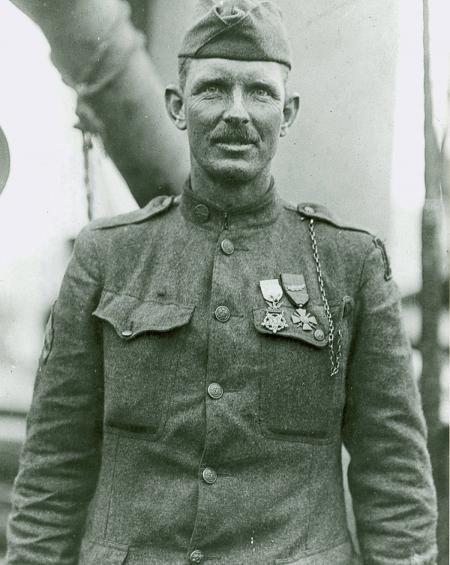 The digital book Medal of Honor: Alvin York will be published by AUSA in conjunction with the Annual Meeting.

One hundred years later, the AUSA Book Program will recognize York’s act of valor with the release of a full-color digital graphic novel.

Medal of Honor: Alvin York is the program’s first foray into the illustrated world, and we were fortunate to work with a talented team drawn from the professional comics world.

Chuck Dixon – known for work on books such as The Punisher, Batman, G.I. Joe, and The ‘Nam–wrote the script. Rick Magyar (Avengers, Captain America, Guardians of the Galaxy) provided pencils, inks and the cover. Pete Pantazis (Justice League, Superman, Wolverine) served as colorist, and Troy Peteri (Spider-Man, Iron Man, X-Men) was the letterer.

Medal of Honor: Alvin York will publish in conjunction with the 2018 Annual Meeting and Exposition from Oct. 8–10. The digital book will be available via the AUSA website and the AUSA app.

Several historians worked with the book program to make sure that the graphic novel was no work of fiction. One of the key advisors was Douglas V. Mastriano, author of the AUSA bestselling biography Alvin York.

Mastriano – who will be in French village of Chatel Chehery on Oct. 8 for the 100th anniversary celebration of York’s famous actions – recently released Thunder in the Argonne: A New History of America’s Greatest Battle.

Mastriano will speak about his new book at an AUSA Institute of Land Warfare (ILW) Lemnitzer Lecture on Nov. 6.

He sat down recently with the AUSA Book Program to answer a few questions.

AUSA Book Program: After your successful biography of Alvin York, why did you decide to tell the larger story of the Meuse-Argonne offensive in Thunder in the Argonne?

Mastriano: York’s story is a central part of the American experience in the Meuse-Argonne. I decided to tell the larger Meuse-Argonne history in order to share the amazing stories of other Americans and Germans who gave everything to accomplish the mission, to defend their countries and to fight for their friends.

AUSA Book Program: Which parts of the story did you find most striking?

Mastriano: What struck me is how ordinary men, when faced with overwhelming odds, accomplish extraordinary feats of heroism. Those that rise to the occasion are usually not the people that you would think would do so.

It’s often those viewed as weak and inadequate, such as Alvin York, the Christian conscientious objector from Tennessee, who thought it wrong to kill for his country.

Or Major James Rieger, from Kirksville, Missouri, whose commander tried to fire him for his kindly leadership style and said that who was “altogether useless.” This “useless” soldier went on to be called the “hero of the Argonne” after he broke the German lines on Vauquois and liberated two French villages in the face of overwhelming German defenders.

AUSA Book Program: What is the most important thing Americans should remember about World War One?

Mastriano: The Great War shaped the world in which we live. It was the single most important event of the past 150 years. What is clear from my research is that average and everyday men and women shaped the course of history.

The legacy of those great men and women of 1918 changed our world. Now it’s our turn to rise up and stand in the gap.

To order a copy of Medal of Honor: Alvin York or Thunder in the Argonne, visit www.ausa.org/books.